February 4, 2021, New Delhi: The majority of Indian citizens who are hesitant about inoculating themselves with COVID-19 vaccinations should have their fears eased when more information about Covid-19 vaccines comes to light. Currently, a varying degree of enthusiasm is being observed amongst citizens ever since the inoculation of two vaccines—Covishield and Covaxin—commenced in India on January 16th 2021. India is close to inoculating 5 million frontline health workers with any of these two vaccines, while less than 10000 adverse events have been reported.

Since October 2020, LocalCircles has been collecting responses from citizens to know their approach on taking the COVID-19 vaccine, aimed to understand if the percentage of reluctance or hesitancy has increased, reduced or remains unchanged along with reasons for hesitancy. The last LocalCircles vaccine hesitancy survey conducted on January 25th, 2021, indicated that 60% of citizens were still hesitant to take COVID-19 vaccine immediately. These majority of respondents in that survey maintained that they were largely worried about side effects, with a small percentage not sure about its efficacy.

Amid all the developments, LocalCircles has conducted another survey to measure the change in the last one week and to understand what could be some of the step changes to reduce vaccine hesitancy. The survey received over 25,000 responses from citizens located in 289 districts of India.

Despite close to 5 million healthcare workers getting vaccinated in 2 weeks, 58% citizens remain hesitant to take the COVID-19 vaccine immediately

The Pan-India COVID-19 vaccination drive that commenced on January 16 is getting close to inoculating 5 million healthcare and frontline workers, and less than 2000 cases of adverse have been reported. In one of the recent adverse cases reported in Telangana, a 55-year-old healthcare worker died 11 days after she received COVID-19 jab. This was the third post immunization death reported in Telangana alone. Similar reports have of adverse cases after taking the Covid vaccine have surfaced from across the country, which in a way have created levels of hesitancy, mainly fears amongst citizens to take the vaccine. Even a survey amongst healthcare professionals in India released in coordination with LocalCircles had earlier indicated that 55% will either defer the vaccination or haven’t yet decided what to do. 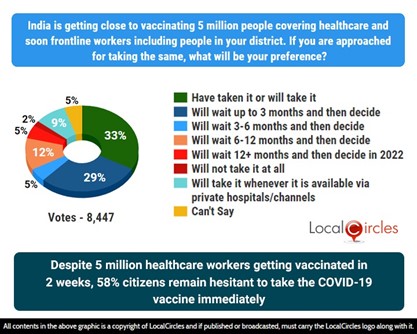 Vaccine hesitancy drops by 16% within a month, with 58% citizens still hesitant to take the vaccine 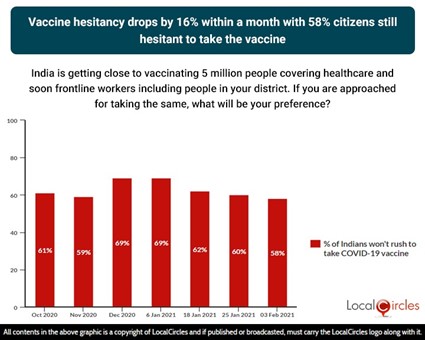 There’s been a varying degree of enthusiasm ever since the inoculation of two vaccines—Covishield and Covaxin —commenced in India. The last LocalCircles vaccine hesitancy survey released on January 27th 2021, indicated that 60% of citizens were still hesitant to COVID-19 vaccine immediately. These majority of respondents in the survey maintained that they are worried about uncertainty about side effects. As more people started to take the jab, amid decline COVID-19 caseloads, hesitancy amongst citizens has reduced to some degree. This week, the percentage of hesitant citizens stands at 58%. A month ago, i.e. in early January, the percentage of citizens hesitant to take the vaccine was 69% which dropped to 62% at the end of the second week when vaccination began and to 60% in the third week of January 2021 to 58% this week. This means that vaccine hesitancy amongst citizens has dropped by 16% within a month’s time. 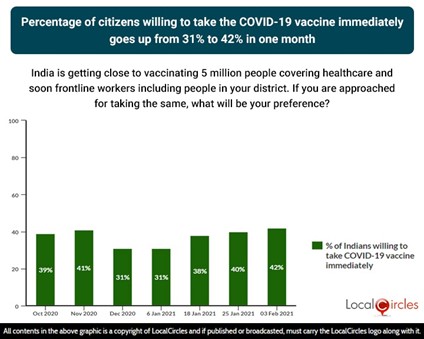 39% of hesitant citizens willing to take the COVID-19 vaccine if senior leaders in Central and State Government, their MPs and MLAs do so

In most countries, top leaders in the government have already taken COVID-19 vaccine. For instance, the US President-elect Joe Biden and Vice President-elect Kamala Harris have inoculated themselves with Moderna vaccine shots, while urging citizens in the country to do the same. In UK, too, Queen Elizabeth II and Prime Minister Boris Johnson have reportedly taken the jab. In India, opposition parties, along with healthcare professionals have urged the government, including Prime Minister Narendra Modi and top leaders, to take either of Covishield or Covaxin doses, which could help in drastically reducing trust and fear issues amongst citizens.

To understand whether citizens would take COVID-19 vaccines if senior leaders of the Central Government, State Government, along with MPs and MLAs take the jab, 39% said that the move will encourage them to take the vaccine immediately. Breaking down the poll, there were 26% citizens who said they would still like to wait up 3 months. Further 16% of citizens said they will wait 3-6 months, 9% said will wait 6-12 months, and 5% will wait more than 12 months and then decide. However, there were 5% of citizens who said they will not take it at all. The question to the poll received 8,641 votes. 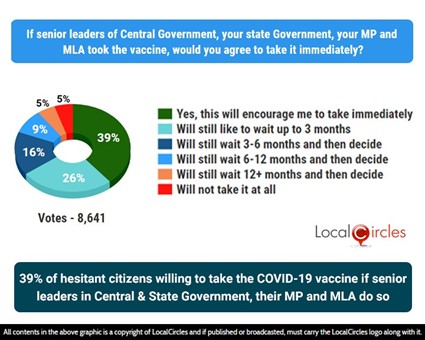 The Government has indicated that the Prime Minister and senior leaders of the Central Government, Chief Ministers, Members of Parliament above the age of 50 may be inoculated in Phase 2 of the vaccination drive which may happen in March or April. Clearly, if one were to go by the poll, this must happen at the earliest to build confidence of people and address vaccine hesitancy. It is likely that once this happens, 39% of those currently hesitant may opt to take the vaccine leading to a possible reduction in hesitancy levels from the current 58% to approximately 35%.

Only 13% citizens say they have access to data related to vaccination centres, daily vaccinations, adverse events in their district; 62% don’t have it and would like to get it

The Government of India has set up a 24x7 helpline – 1075 — to provide information on vaccines and has also introduced Co-WIN software for individuals to self-register for inoculation. It has also directed government officials, including accredited social health activists and Anganwadi workers to address any safety concerns of citizens through awareness drives, ongoing door-to-door health surveys, aimed to build confidence against vaccine hesitancy. However, in this internet era, making district level vaccination data accessible to people is essential and the same seems to be the key missing link and remains a key citizen concern. 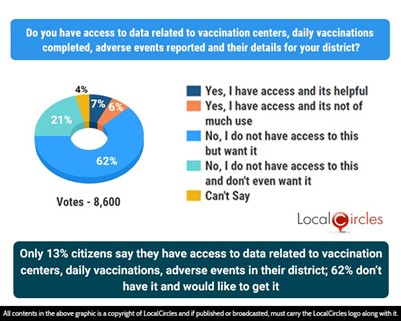 In summary, as vaccination is progressing in India, vaccination hesitancy is reducing week over week with a 16% drop in hesitancy within the last month. However, the hesitancy level of 58% is still quite high and the polls in this study indicate that one sure shot way of reducing the vaccine hesitancy is leaders in Central and State Governments, MPs and MLAs taking the vaccine. Per the poll on the subject, once that happens, the hesitancy levels are likely to drop to 35% and hence this must be a top priority for the Ministry of Health & Family Welfare. In addition to this making district level vaccination and adverse event data available on fingertips to people will help build the confidence further. Such information availability will also greatly reduce the flow of misinformation which otherwise is currently getting circulated via social media.