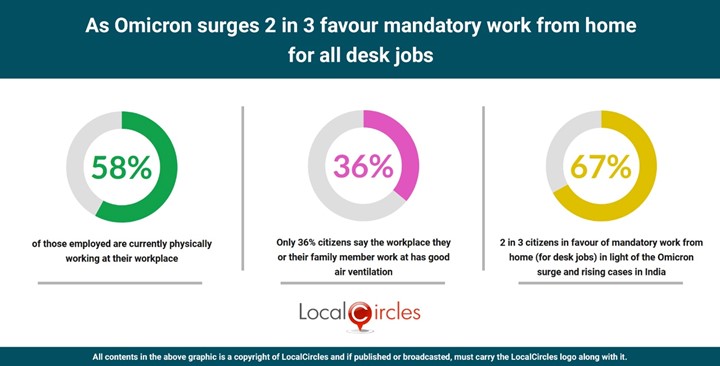 January 5, 2022, New Delhi: India has started to witness a major surge once again in COVID cases, with national daily case load rising by 10X or 1100% in 2 weeks (From 5300 cases recorded on Dec 20th to nearly 60,000 cases on Jan 4th) led by the Omicron variant. The Delhi Health Minister yesterday confirmed that 81% of the cases in the national capital are now Omicron basis the genome sequencing results. This latest surge has prompted the Central and State Governments to consider imposing new restrictions on public movements. The Central Government has already directed physical attendance of Government employees under Secretary level to operate at 50% and the remaining to work from home. In states like West Bengal where the daily Test Positivity Rate is at 15.93% as on January 2nd, the State Government has directed workplaces to operate at 50% of employees and has encouraged offices to work from home. With the December LocalCircles survey indicating that 2 in 3 Indians believe the 3rd wave will be here within next 3 months, people are keen that all activities that will cause Omicron variant to spread rapidly must be reviewed and where feasible, restricted.

Recently, the Health Ministry recommended restricting number of people in offices and industries as a containment measure in light of the surge in cases of COVID driven by Omicron variant The US-based Center for Disease Control and Prevention (CDC) warns that SARS-CoV-2 viral particles spread easily between people more readily indoors than outdoors as the concentration of virus is often higher indoors than outdoors. It is important for indoor spaces to have good outside air ventilation as it reduces the concentration of viral particles, makes it less likely for it to be inhaled into the lungs through eye contact, nose, and mouth. Amid the Omicron cases surging in India, many citizens on LocalCircles have been raising the issue to high risk associated with indoor workplaces as the ventilation is usually poor in many of them. Taking cognisance, LocalCircles conducted a national survey to understand the risk of continuing working in physical offices. The survey tries to understand how many citizens employed in public and private sector desk jobs are going to offices and if there is an effective outside air ventilation in these workplaces. Further, the survey gathers citizens’ pulse on mandating work from home for desk jobs till the time Omicron cases are high. The survey received more than 28,000 responses. 63% of the participants were men while 37% were women. 47% respondents were from tier 1 districts, 35% from tier 2 and 18% respondents were from tier 3, 4 and rural districts. The respondents for this survey were only those in organized sector jobs or their family members.

58% of those employed are currently physically working at their workplace

The first question in the survey asked citizens employed in public and private sectors about their current situation in regard to going to work. In response, 40% said they are “going to work regularly” and 18% said that they are “going to work few days a week and working from home for the rest”. Breaking down the poll, 18% said they are “working from home and just going for some meetings” and 24% said “working from home only and not going for any meetings”. On an aggregate basis, 58% of those employed in public or private sector are currently working physically at their workplace. This question in the survey received 8,478 responses. 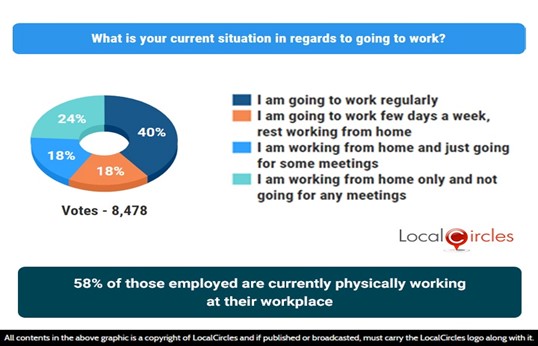 Poor ventilation in indoor spaces increases the risk of contracting the virus as the concentration of virus particles in the air remains high. Amid Omicron cases surging in India, which is 3 times more transmissible than the Delta variant, poor ventilation in indoor spaces can add to the spread of the new variant. Taking cognizance, citizens were asked if the workplace they or their family member(s) go to work have access to outside air through doors and windows, 21% of citizens surveyed said their workplace doesn’t have good air ventilation. There were only 36% of citizens saying the workplace they or their family member work at has good air ventilation, while 39% said it is partially ventilation. 4% of citizens did not have an opinion. This question in the survey received 9,090 responses. 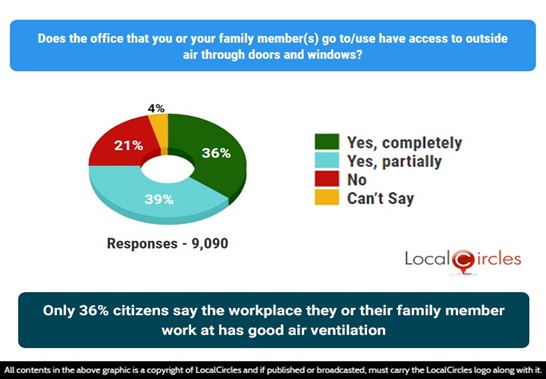 Studies from the UK suggest that the Astrazeneca vaccine (administered under name Covishield in India), which accounts for 90% of the jabs given in the country may provide minimal protection against the new variant from a risk of infection standpoint. The precautionary dose or third dose is currently only available to health care and frontline workers as well as the vulnerable population above 60 years of age, leaving the rest vulnerable. With the risk of spread being much higher indoors, those working in offices and large corporate buildings with central air conditioning are most susceptible to catching and spreading the virus. In cities like Delhi and Mumbai where case loads have rise by 20 times in last two weeks unless immediate steps are taken they could further rise by 20 times in the coming two weeks.

The final question in the survey asked citizens, “In light of Omicron surge in India, rising overall cases and the risk of poorly ventilated indoor working spaces, should mandatory work from home (for desk jobs) be implemented? “In response, 67% of citizens said “Yes” while 28% said “No” while 5% couldn’t say. On an aggregate basis, 2 in 3 citizens are in favor of mandatory work from home (for desk jobs) in light of the Omicron surge and rising cases in India. This question received 10,928 responses. 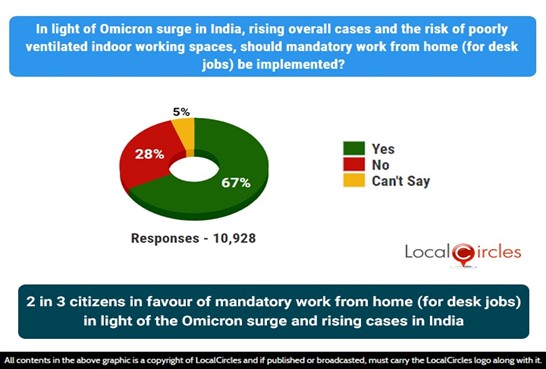 In summary, 58% of those employed in public and private sectors are currently working physically at their workplace. Those employed in desk jobs and working from shared indoor spaces remain vulnerable to contracting and spreading the virus as only 36% of citizens say the workplace, they or their family member work has good air ventilation. Given that cases of Omicron are surging in India and the risk of poorly ventilated offices, 2 in 3 citizens are now in favor of mandatory work from home.

The Central Government and State Governments must consider implementing a policy where all desk jobs that can be done remotely are given a “Work From Home or WFH” option, especially in districts where the Test Positivity Rate is 0.5% or higher and there is week over week case growth.

LocalCircles will share the findings of this survey with Central and State Government stakeholders and leading industry associations so necessary steps are taken to minimize the impact of the Omicron driven surge and 3rd wave in India.

The survey received more than 28,000 responses. 63% of the participants were men while 37% were women. 47% respondents were from tier 1 districts, 35% from tier 2 and 18% respondents were from tier 3, 4 and rural districts. The respondents for this survey were only those in organized sector jobs or their family members. The survey was conducted via LocalCircles platform, and all participants are validated citizens who had to be registered with LocalCircles to participate in this survey.

67% Indians favor mandatory work from home in light of Omicron surge: Survey - Times of IndiaJan 05, 2022India Business News: The survey revealed that 58% of those employed are currently physically working at their workplace and only 36 percent said the workplace has good air 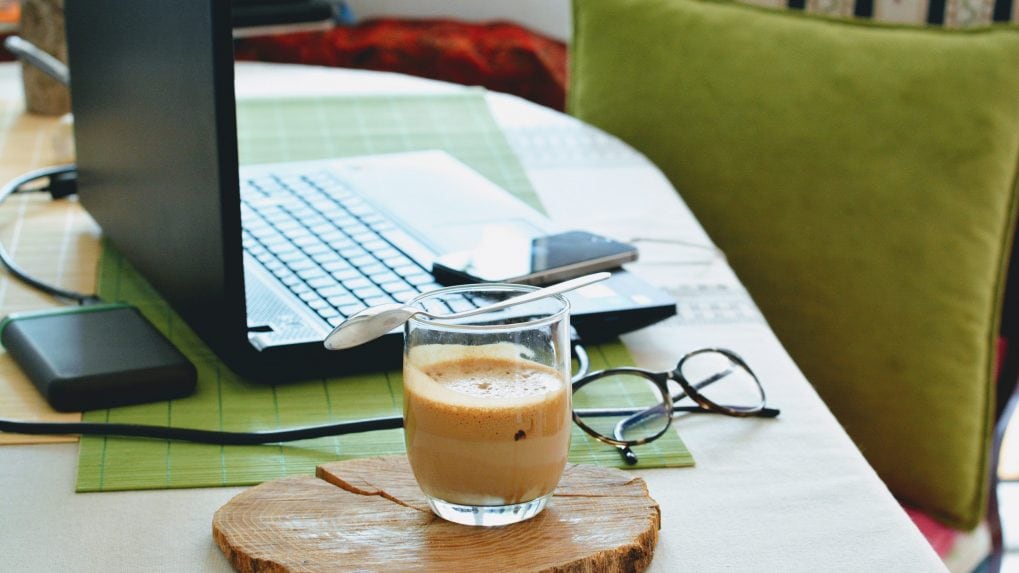 2 of 3 people want mandatory work from home to avoid mass COVID-19 spread, finds surveyJan 07, 2022Work from home: A survey has found that 58 percent of those employed are currently physically working at their workplaces and only 36 percent say the workplace they or their family member work at has good air ventilation. 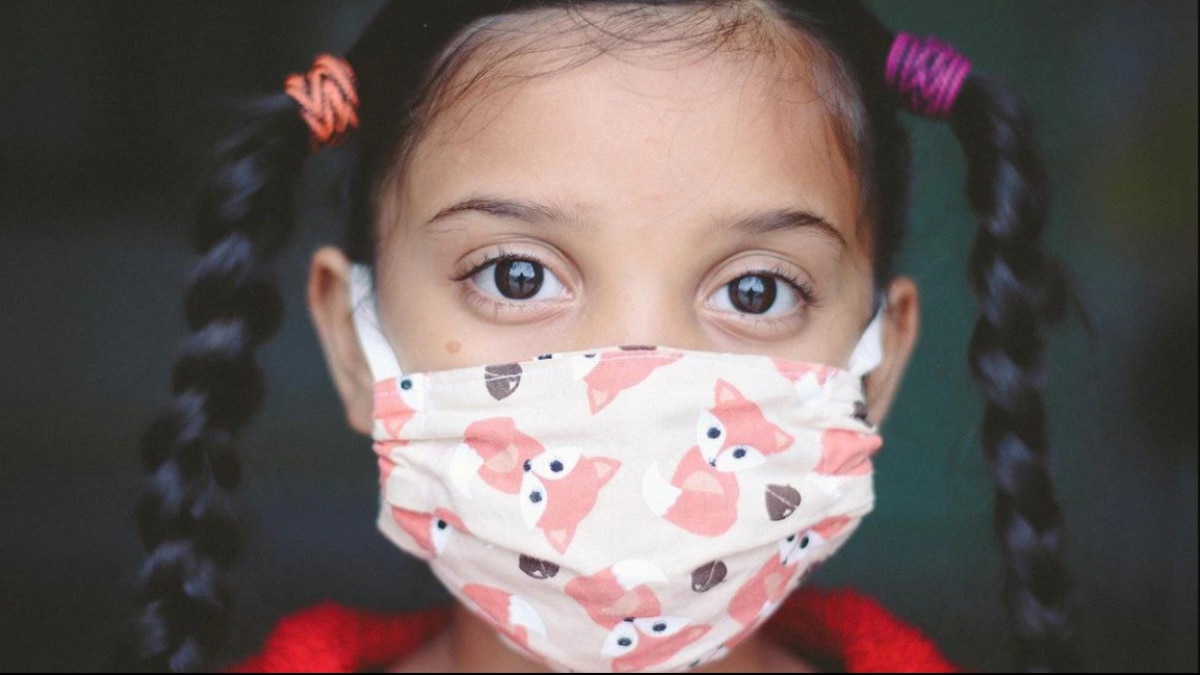 COVID-19: 52% parents don’t want to send kids to in-person schools: SurveyJan 07, 2022According to a recent LocalCircles survey, more and more Indian parents are unwilling to send their children to in-person schools with the rise in coronavirus cases and the threat of Omicron.