With the threat of Omicron variant on horizon, parents not sending children for in-person school likely to rise

December 2, 2021, New Delhi: Schools in most states of India resumed in person classes in August-September of this year after a significant decline in daily COVID cases post 2nd wave of the pandemic. However, once again, since the last week countries from around the world are on high alert after a new COVID variant B.1.1.529, aka Omicron was reported in Botswana, South Africa and Hong Kong. In a matter of a week, now over 25 countries have reported the presence of Omicron with scientists confirming that it is more transmissible than the Delta variant and could evade vaccines up to some extent. Doctors from South Africa have also reported a higher number of cases of Omicron in the under 25 population.

While no cases of Omicron have been sequenced in India yet, but given that over two dozen countries, including UK and the Netherlands have reported the variant within a week with no travel history indicates that the community spread of Omicorn is happening there. India has also become very active with the Government reconsidering the resumption of international commercial flights from December 15th and putting in place stringent testing, tracking and tracing guidelines for international passengers coming to India. Amongst all of this, the big question in the mind of many parents is whether it is still safe to send their children to school.

LocalCircles has been very active over the years, especially during the COVID pandemic in ensuring that the collective opinion of parent and grandparents of school children reaches the Government on various school issues, especially around reopening and closure. After parents raised the demand to reopen schools in February this year and again in August, LocalCircles escalated the same to Central and State Governments leading to reopening in many states. The same was the case with school closure in late March.

Schools have been open since August-September in most states but recently clusters of COVID cases have been reported from states like Telangana and Karnataka, with some parents in Hyderabad and Bangalore demanding a move back to online classes. Post Omicron, when parents started discussing the subject since last week, LocalCircles has conducted another survey to understand where parents stand on sending their children to school. The survey received 15,875 responses from parents residing in 308 districts of India. 63% of the participants were men while 37% were women. 43% of respondents were from tier 1 districts, 30% from tier 2 and 27% respondents were from tier 3, 4 and rural districts.

With the threat of Omicron variant on the horizon, schools are likely to see a drop in students attending in-person classes 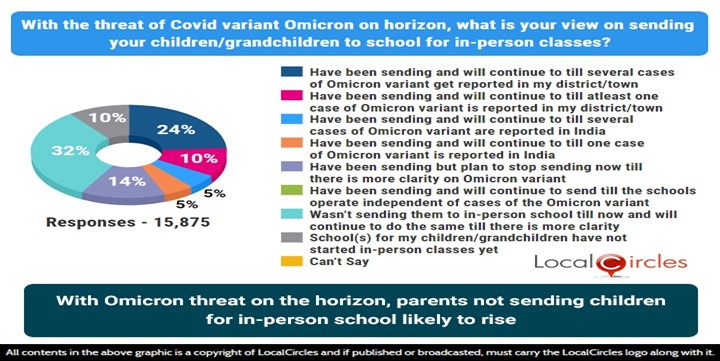 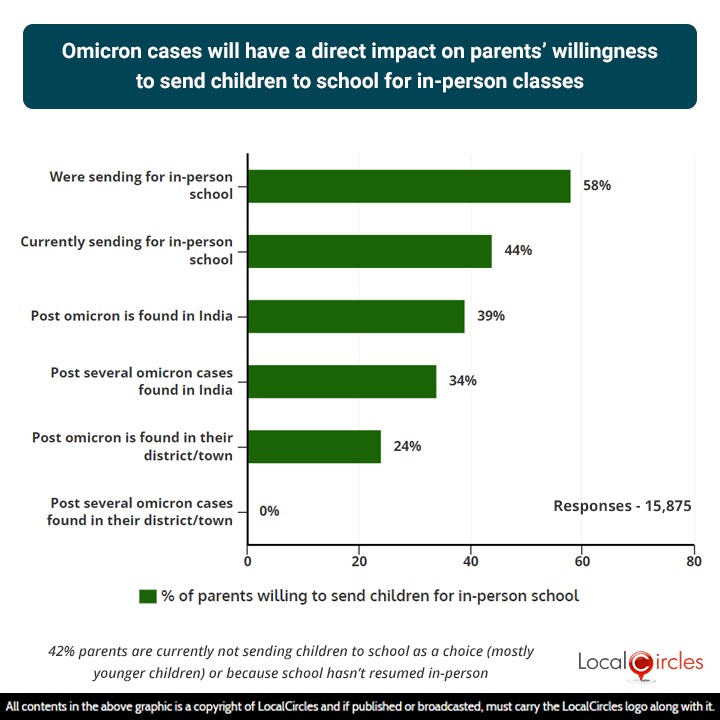 The key for the safe reopening of schools, according to global epidemiologists, depends on six factors including (a) vaccination of every staff member, (b) good outside air ventilation in classrooms including air purifiers in each class, (c) mandatory masking of KN95 or N95 (no cloth or surgical mask), (d) seating with social distancing, (e) no big Indoor gatherings, and (f) Random antigen testing of staff and students. School administrators should implement daily declarations by parents about the health of the child and all the family members along with thermal checks for all at school entry. At this point, keeping schools open but with high levels of caution is the right approach.

LocalCircles will share the findings of this survey with key stakeholders in the Central Government and Chief Secretaries of all states so inputs of parents can be considered as they finalise their school protocols in light of the threat of the new Omicron variant.

The survey received 15,875 responses from parents residing in 308 districts of India. 63% of the participants were men while 37% were women. 43% of respondents were from tier 1 districts, 30% from tier 2 and 27% respondents were from tier 3, 4 and rural districts. The survey was conducted via LocalCircles platform and all participants were validated citizens who had to be registered with LocalCircles to participate in this survey.