Mosquito Menace: 70% Indian households say their Municipal Corporation or Panchayat does not at all or rarely does any fogging for mosquito control 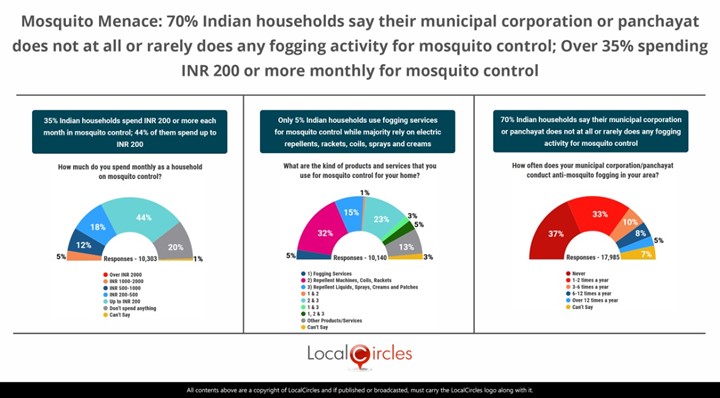 August 31, 2021, New Delhi: With various parts of India experiencing incessant rain since July, some states are already witnessing an increase in mosquito-borne diseases. For instance, Mumbai is already seeing a surge in dengue and malaria cases at most of its hospitals. Hyderabad has already reported over 800 cases of dengue alone in the last 10 days. Mosquitos are rampant across many cities and with schools now opened in most states and several others considering opening them in the next few weeks, the cases of mosquito-borne diseases will likely increase in September.

Taking cognizance of the issue, health officials in Madurai District have already started deploying domestic breeding checkers to monitor areas that are prone to dengue, and are conducting indoor and outdoor fogging to kill mosquitos that may be carrying a dengue virus. In Delhi, the South Delhi Municipal Corporation recently issued legal notices to 20 state bus depots for allegedly failing to contain mosquito breeding during monsoon. In Ahmedabad too, officials carried out checks at 380 commercial establishments and reportedly fined 53 of them on finding mosquito breeding sites. While active actions are taken by a few municipalities, there are thousands of others who continue to be inactive on the issue of mosquito control. Be it construction sites, public places or garbage dump sites, mosquito breeding goes unchecked by most authorities. Citizens are left to fend for themselves and many are forced to buy various mosquito control products like repellent machines and liquids, coils, rackets to creams and patches to get rid of mosquitos around their homes.

After hundreds of posts and comments were received in the last 2-3 weeks about the mosquito menace, LocalCircles conducted a survey to understand the type of mosquito control products and services citizens use at homes to get rid of the deadly insects, along with the amount of money they spend each month in buying such mosquito control products/services. It also sought to know how often their municipality or panchayat are conducting fogging services to prevent mosquito-borne diseases in their area. The survey received more than 38,000 responses from Indians residing in 352 districts of India. 61% of the participants were men while 39% were women. 43% of respondents were from tier 1 districts, 31% from tier 2 and 26% respondents were from tier 3, 4 and rural districts. 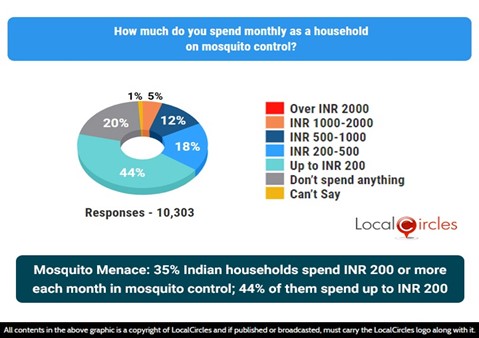 Mosquito menace: Only 5% Indian households use fogging services for mosquito control while the majority rely on electric repellents, rackets, coils, sprays and creams 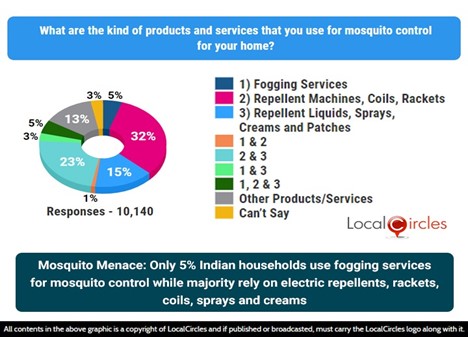 Mosquito menace: 70% Indian households say their Municipal Corporation or Panchayat does not at all or rarely does any fogging activity for mosquito control in their area

Many people have also highlighted that there is no transparency in when the municipal corporation or panchayat does fogging activity and who the point of contact is in case such services are not performed. People also raised concerns that their muncipality may be allocating funds to such a service but they are non-existent on ground. 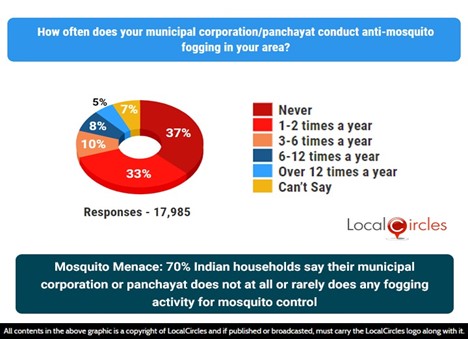 In summary, the findings of the survey indicate that the majority of Indian households regardless of financial status are buying mosquito control products to keep themselves safe. While only a small 5% are using privately hired fogging services, the majority rely on electric repellents, coils, rackets, creams and sprays to keep themselves safe. 35% of the households are spending over INR 200 each month on mosquito control and 44% of households are spending up to INR 200 to keep mosquitoes away. 70% of respondents said their municipal corporations and panchayats are not providing fogging services or providing them once or twice a year. This clearly highlights a major gap in civic services in most of the locations.

Lack of mosquito control leads to diseases like Dengue, Malaria, Chikungunya and others, leading to the burden of medicines, pathology tests, hospitalisation which translates into negative financial impact due to costs incurred for treatment as well as loss of workdays. Not to forget are also the many sleepless nights that people go through which ultimately lead to lower levels of productivity and efficiency during the day.

It is critical that every State Government tie the accountability on mosquito control to their municipal commissioners and panchayat heads who in turn should tie it to health officials in their team and local councilors and representatives. Also, it is important that schedules be laid and published in advance for all fogging activity and inspections so in case there are gaps, the same can be highlighted by people and redressed. As a nation, we need to address the issue of mosquito menace on priority, and perhaps it is time for a Mosquito-Free India Mission or a Swachh Bharat Mission Part 2 so it can receive the right focus from both Central and State Governments.

LocalCircles with share the findings with key stakeholders in Central Government as well as all State Chief Secretaries so the message can reach all municipalities and panchayat heads that the common citizen in India needs them to act on the issue of mosquito control.

The survey received more than 38,000 responses from Indians residing in 352 districts of India. 61% of the participants were men while 39% were women. 43% of respondents were from tier 1 districts, 31% from tier 2 and 26% respondents were from tier 3, 4 and rural districts. The survey was conducted via LocalCircles platform and all participants were validated citizens who had to be registered with LocalCircles to participate in this survey.