75% consumers feel children are being misled in many advertisements for apps, gaming and other online services

October 2nd, 2020, New Delhi: During the pandemic months, a series of advertisements were flagged by the consumers as misleading including products like mattresses, sanitizers, fabrics, readymade garments, juices, breads and even ice creams as immunity building for COVID-19 or fighting the COVID-19 virus. In August this year, LocalCircles had release a consumer study on misleading ads which had received over 67,000 responses and the findings of the study were submitted to the Department of Consumer Affairs. Through the survey, consumers had raised strong concerns via LocalCircles about a series of misleading advertisements before and during the COVID-19 pandemic. 75% consumers had said they had come across celebrity ads which were misleading, while 80% consumers had said ads should be regulated by a Government body instead of an industry body which does not have penal powers. Consumer had said with Consumer Protection Act 2019 notified now, an advertisement code must be developed and enforced to minimise such misleading ads

Post the LocalCircles study, in late August, the Ministry of Consumer Affairs issued a draft for ‘Central Consumer Protection Authority (Prevention of Misleading Advertisements and Necessary Due Diligence for Endorsement of Advertisements) Guidelines, 2020 aimed at preventing unfair trade practices and protecting consumers’ interest. These guidelines or rules once applicable to the manufacturers, service providers and businesses whose products/services are subject of the advertising & marketing communications, as well as to the advertisement agency and endorser of products/services. The Government had set a revised deadline of 1st October for the public to give their feedback on the draft policy.

LocalCircles converted this draft into some more easy to understand and participate questions to get feedback of common consumers on this draft policy. The combined survey on advertising code received over 115,000 responses from consumers spread across 320+ districts of the country. 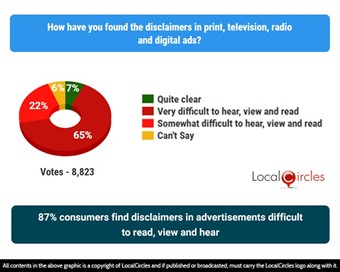 This means that 87% consumers find disclaimers in advertisements difficult to read, view and hear. The draft guidelines clearly state that a disclaimer should not attempt to correct a misleading claim made in an advertisement and should be clearly visible to the consumer. Non-legible disclaimers will also be considered as misleading ads.

The next question asked in the last 1 year, where have they come across advertisements that are inappropriate for children. In response, 19% said television, 4% said in general video sites like YouTube, while 27% said both of the above. 2% said newspapers while 34% said all three of the above mediums i.e. television, general video sites and newspapers. Only 4% said none of these and 10% said they were unsure.

86% consumers have come across child inappropriate ads on television, digital sites or newsprint in the last 1 year 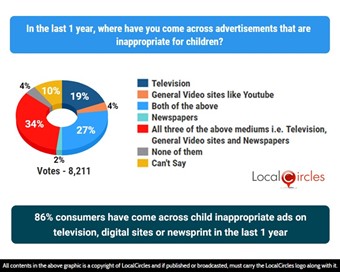 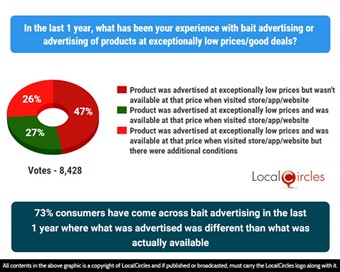 This clearly shows that nearly 73% consumers have come across bait advertising in the last 1 year where what was advertised was different than what was actually available.

75% consumers have come across ads of apps, games and online products/services that were designed to mislead children into spending 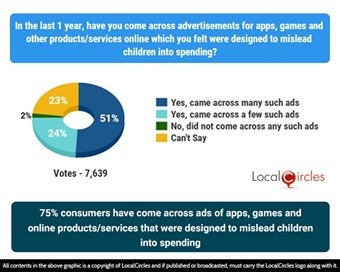 The result of this poll points out to the fact that 75% consumers have come across ads of apps, games and online products/services that were designed to mislead children into spending.

49% consumers have come across ads in the last 1 year where a free product was offered with charges for packing, packaging, handling and administration 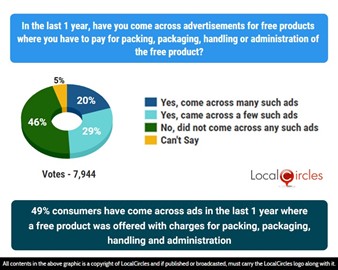 The data shows that 49% consumers have come across ads in the last 1 year where a free product was offered with charges for packing, handling and administration. Over the last few years, the way in which people consume ads has drastically changed and there has been a major shift towards digital advertisements that are put out though thousands of websites, including Facebook, Twitter, Instagram, YouTube etc. and hence it becomes necessary that these platforms are also monitored for misleading ads. Over the last 3 years, LocalCircles has received thousands of complaints about digital ads that offer to sell something at exceptionally low prices and at times free and a credit/debit card is taken for charging administration or shipping charges. In many of these cases per consumer complaints, the charge is levied but the product doesn’t arrive.

When asked if the Government should also prohibit advertisements from gaming platforms especially the ones where an individual can earn or lose money (similar to gambling), 77% said yes while only 18% said no. 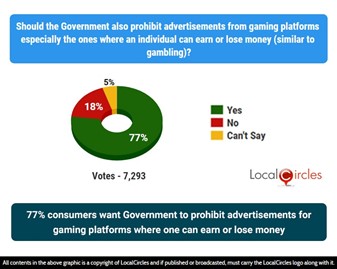 On 18th September 2020, media reports appeared stating that Google removed some fantasy gaming apps stating that we don’t allow online casinos or support any unregulated gambling apps that facilitate sports betting. This includes if an app leads consumer to an external website that allows them to participate in paid tournaments to win real money or cash prizes, it is a violation of our policies. Apps like Dream 11, myteam11, mycircle11 etc. which call themselves ‘skill-based gaming platforms’, also encourage people to spend money on their platforms in a bid to win more money.

Only 28% consumers have trust in advertisements 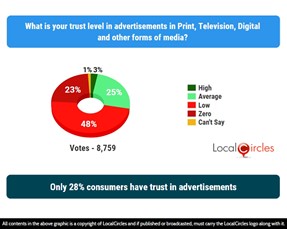 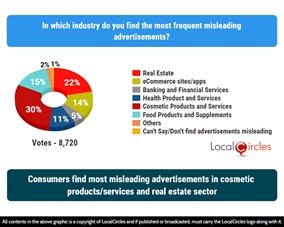 Consumers were also asked if, in the last 12 months, they had come across ads (print, TV or digital) that were vulgar in nature. 60% said yes and 29% said no. 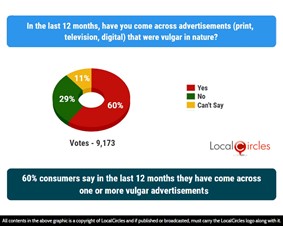 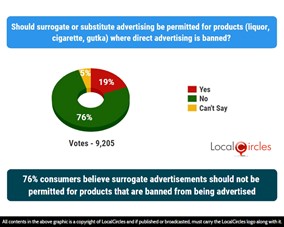 The next question asked if in recent years people had come across advertisements by a celebrity which they later discovered to be false or misleading. 75% replied in a ‘yes’ while 11% said ‘no’. 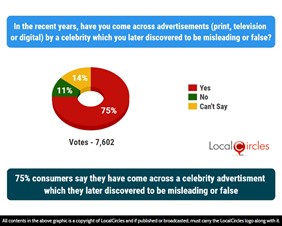 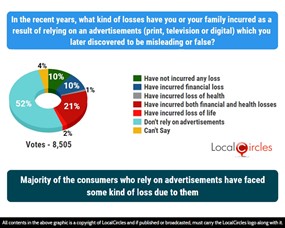 The final question asked consumers how the regulation of misleading ads can be made more effective given that it is currently done through an industry body by the name ASCI. 11% said it is already effective and the current self-regulation system should continue while 80% said it should be regulated by a Government body instead. 3% respondents said advertisements should not be regulated at all. 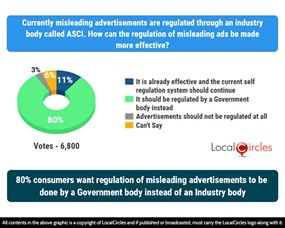 In addition to the above issues, consumer raised some additional pertinent points to be included before the draft advertising code is finalised. Consumers said that with Consumer Protection Act 2019 notified, the advertisement code with rules (and not a mere guideline) must be developed and enforced to minimise such misleading ads. Also, hundreds of consumers pointed out that advertising code must qualify anyone as a consumer who has bought a product or anyone who has seen an advertisement and has found an issue in it. Many consumers highlighted that most of the regulations require a transaction to be done for a brand to held accountable and action taken by the authorities and that prevents actions from being taken in many cases of misleading advertisements. Instead, anyone who has seen a misleading ad and is reporting the same must be considered a prospective buyer and the draft advertising code should consider all such complaints and action them.