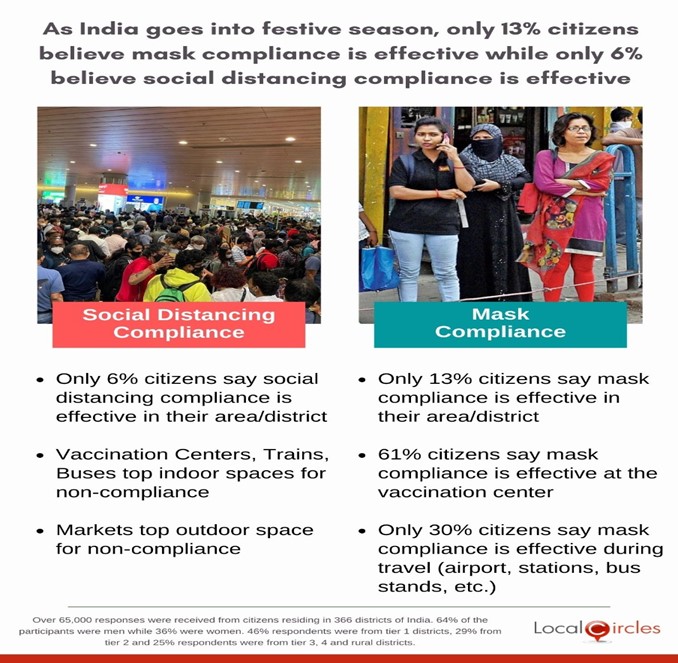 October 10, 2021, New Delhi: Wearing a mask and following social distancing norms are highly recommended by public health experts to protect ourselves from COVID. With daily caseloads declining from 400,000 a day to near 22,000 a day now, almost all activities have been opened by the Central and State Governments including markets, parks, schools and movie theaters in most parts of India. As India’s major festive season (October to November) has just started, not adhering to masking and social distancing protocols will only increase the risk of COVID spread and could accelerate the arrival of a 3rd wave or at the least a rise in COVID cases.

Health experts have stated that there is a 90% risk of infection associated with two individuals not wearing a mask and not maintaining adequate social distancing. The risk gets reduced to 30% if the unaffected person is wearing a mask. The office of the Principal Scientific Advisor to the Government earlier issued a guideline, highlighting those droplets and aerosol are the primary ways of transmission. It states that droplets can fall within 2 meters from an infected person, while aerosols can be carried in the air up to 10 meters. This means the virus can quickly spread from a small number of people to a very large population if COVID-appropriate behaviors are not seriously taken. During the festive season, communities organize melas, people shop, socialise and come in contact with a large number of people. With restrictions in place for a major portion of the last 18 months, 1 in 2 households is planning to socialise this festive season per the LocalCircles study in September.

LocalCircles has conducted another extensive study survey to find out how people are complying to mask and social distancing protocols in cities and districts, while traveling in flights/airports, trains/railway stations and bus/bus stands as well as places like vaccination centers which many have visited in the last few months. 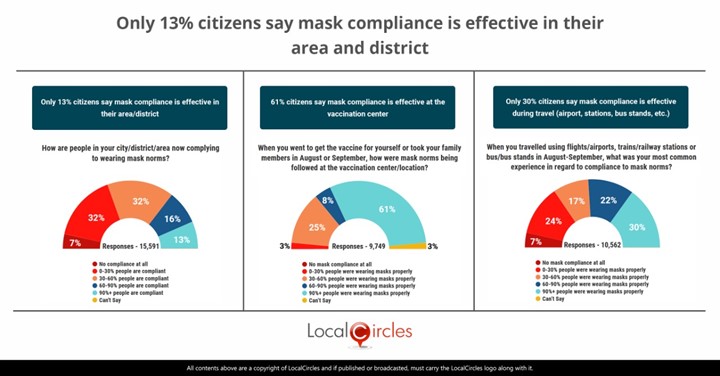 The first question sought citizens’ observations of people in their area, district or city complying with wearing a mask. In response, 7% said there is “No compliance at all”. Breaking down the poll, 32% said there are “0-30% of people are compliant”, another 32% said “30-60%”, 16% said it’s “60-90%”, and 13% said “more than 90%” people are compliant to masking protocol. On an aggregate basis, only 13% of citizens say mask compliance is effective in their area, district, or city. This question in the survey received 15,591 responses. 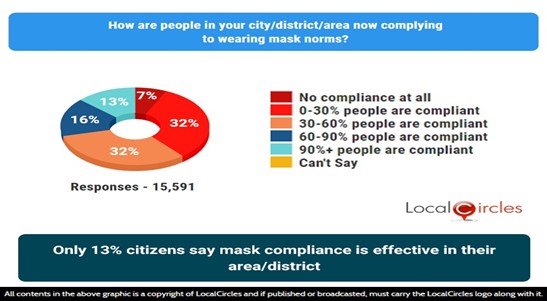 61% citizens say mask compliance is effective at the vaccination center

Vaccination centers in many cases have been seen as overcrowded spaces with people lining in a queue to get a jab, and uncontrollable in some locations. Many citizens on LocalCircles have pointed out that their family members have gotten COVID a few days after receiving vaccination at centers, citing the high possibility of some vaccination centers being superspreaders as people were not even following masking protocols. Especially in cities and districts, even if people wore a mask rarely covered their mouth and nose.

The next question aimed to seek a collective response from citizens about how mask norms were being followed at the vaccination center or location when they or their family members went to get the vaccine in August or September. In response, 3% of citizens said there were “0-30%” people compliant with masking protocol. 25% said “30-60%”, 8% said “60-90%”, and 61% said “more than 90%" people were wearing masks properly. The findings of the survey indicate 61% of citizens saying mask compliance is effective at the vaccination center. This question in the survey received 9,749 responses. 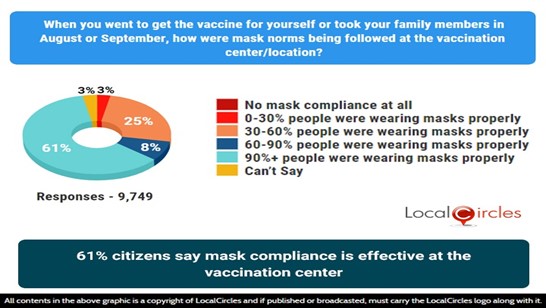 Aerosols and droplets are the key transmission mode of the virus to enter our body. The virus is released in the saliva and nasal discharge of an infected person through exhalation, talking, speaking, singing, laughing, coughing, sneezing, etc. Even one infected person showing no symptoms can release enough droplets to create a “viral load” that can infect many others. Therefore, wearing a mask at all times is absolutely necessary. As per PSA advisory, citizens should wear a mask when stepping out from home, and also at home with outsiders.

The next question in the survey sought collective response from citizens about how compliant were people towards mask norms when they travelled using flights/airports, trains/railway stations or bus/bus stands in August-September. In response, 7% of citizens said there was “no compliance at all”. Breaking down the poll, 24% said “0-30%” people were wearing masks properly. 17% said “30-60%”, 22% said “60-90%”, and 30% said “more than 90%” people were wearing masks properly. On an aggregate basis, only 30% of citizens say mask compliance is effective during travel at airports, stations, bus stands, etc. This question in the survey received 10,562 responses. 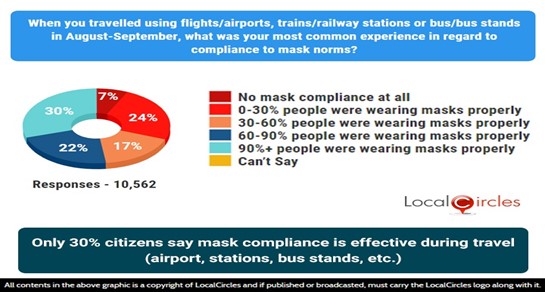 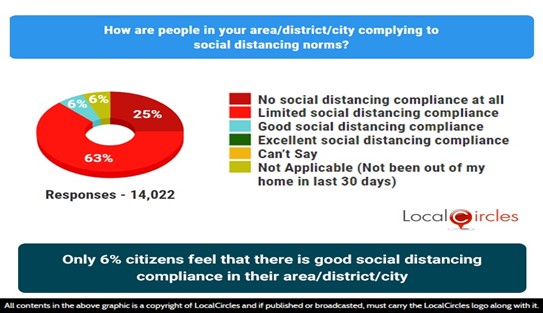 The following question in the survey asked citizens where they have observed the least compliance to social distancing norms at indoor spaces in the last 30 days. In response, 8% said “hospitals”, 2% said “pathology labs”, 21% said “vaccination centers”, 3% said “office or corporate buildings”, 9% said “malls and indoor shopping complexes”, 3% said “restaurants”, 4% said “airports”, 9% said “trains, buses and other public transport”, and 10% said “other locations”. Further, 31% of citizens said they have not visited any external indoor space in the last 30 days. On an aggregate basis, 69% of citizens have visited an external indoor space in the last 30 days. This question in the survey received 9,553 responses. 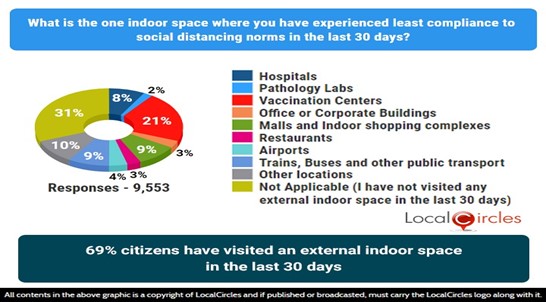 An alternative finding of the survey amongst citizens who have visited an external indoor location suggests that the top indoor locations where they have observed low social distancing compliance in the last 30 days were vaccination centers, trains, buses, malls and indoor shopping complexes. 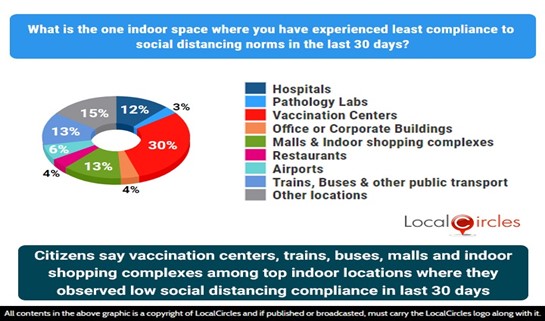 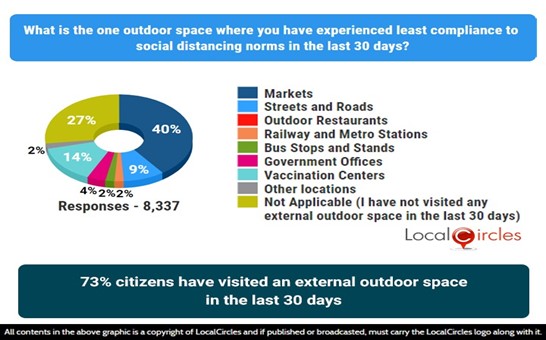 An alternative finding of the survey amongst citizens who have visited an external outdoor location suggests that the market was the top outdoor location where they have observed low social distancing compliance in the last 30 days. 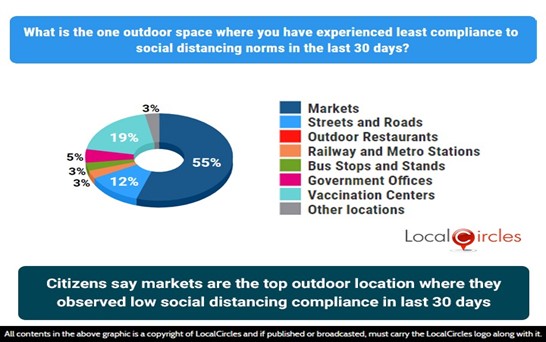 A previous LocalCircles survey from June 2021 which was shared by MOHFW in its briefing on July 6th this year had indicated that mask compliance was rated as effective by 29% people then and social distancing compliance as effective by 11% back then. “The drop in mask compliance ratings from 29% to 13% and in social distancing compliance ratings from 11% to 6% indicates that complacency has set in with many now believing that COVID is gone”, said Sachin Taparia, Founder of LocalCircles.

“With 2021 festive season already on and likely to see significantly higher levels of socialising, shopping and community events, the risk of COVID cases rising is now high”, continued Taparia. The travel euphoria currently is stronger than the one LocalCircles reported in February-March this year, said Taparia.

It is critical that the Central Government, State Governments and District Administrations ensure that clear guidelines are formed and enforced for community gatherings and compliance to masking and social distancing norms. Special focus is needed on awareness creation and ensuring compliance in tier 3, 4 towns and rural districts where in some cases per feedback received the compliance is at near zero levels.