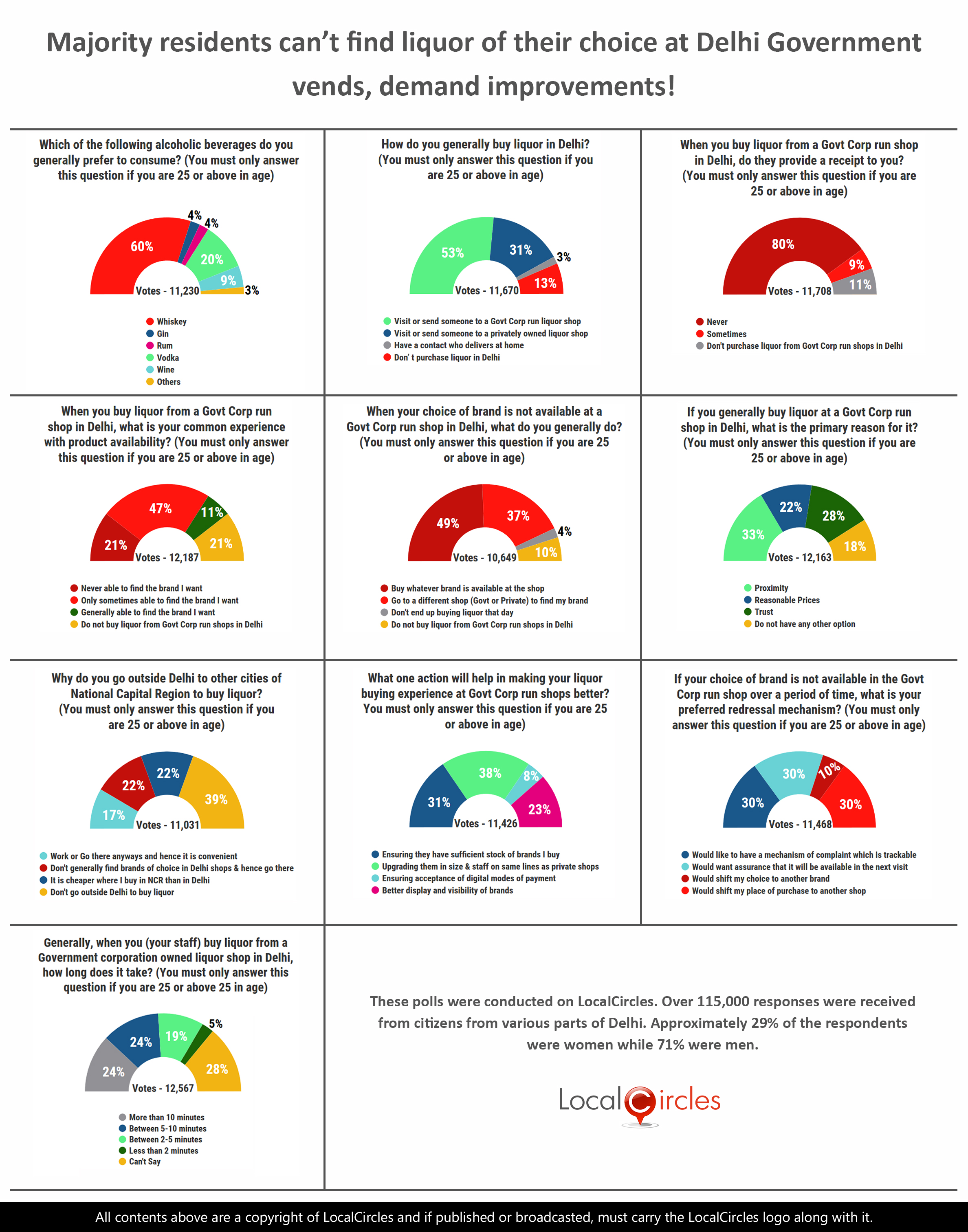 10th November, 2019, New Delhi: India is the 9th largest liquor market globally and if you look at the volumes, Indians consume the highest volumes of whisky in the world. As per the recent AIIMS-ISI study, Delhi consumes five lakh litres of alcohol worth Rs. 6 crores every month. And with all that money being spent, getting the liquor of their choice and a good experience at liquor vends is the least Delhi Residents can ask for. Through various posts on LocalCircles over the last few months, Delhi Residents have expressed dissatisfaction with the process through which liquor is sold in Delhi, especially through the Government corporation run liquor vends. To ascertain the gravity of the situation, LocalCircles conducted an extensive public consultation and a survey to gauge the consumer pulse on their liquor buying experience in Delhi. To make sure that the assessment was accurate, the survey was open only to people who were more than 25 years of age and validated residents of Delhi.

Along with the survey, LocalCircles also conducted an on-ground study in various parts of Delhi. It sent mystery shoppers to many Government Corporation run and private liquor vends to understand the sale process, and spoke with buyers who came to these shops to buy liquor. The idea was to understand the liquor buying experience of the consumer, what kind of liquor they buy and the process through which liquor is sold/suggested to the customer by a liquor vend. Currently the Delhi Government vends come under the management of Delhi Corporations like DSIIDC, DTTDC, DSCSC and DCCWS.

In the first question, Delhi Residents were asked which alcoholic beverage do they generally prefer to consume. 60% respondents chose whiskey, 20% vodka, 9% wine, 4% gin, 4% rum and 3% said others. 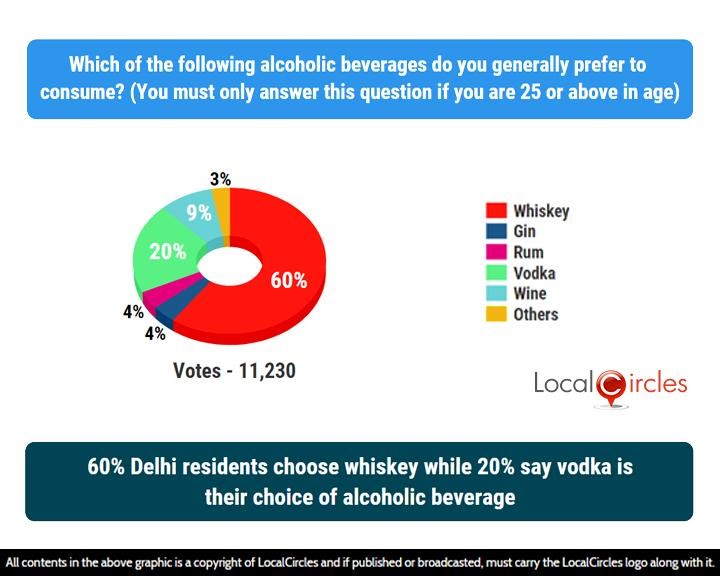 Alcohol consumption in India has doubled over the last decade and it is estimated that around 20 million people reach the legal drinking age in India every year.

The on-ground study also pointed towards whiskey being the favourite drink and vodka being an upcoming alternate, especially for females. 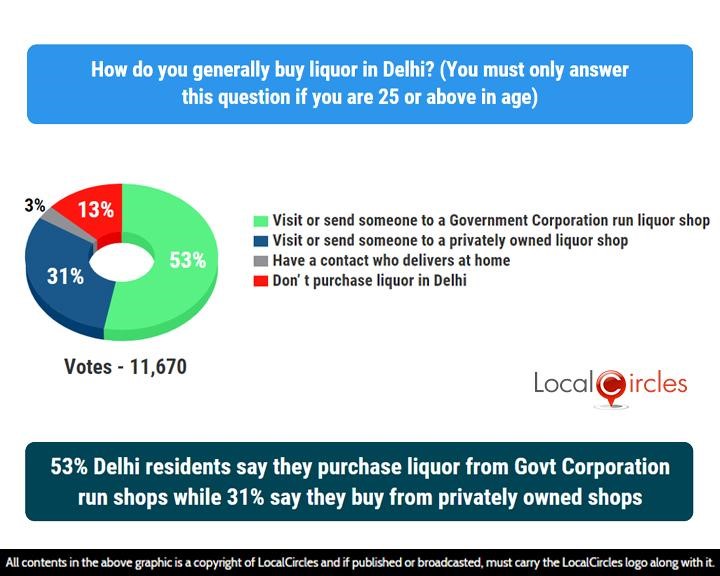 Indian Made Foreign Liquor, or IMFL, is a term used to denote west-styled hard liquors such as whisky, rum, vodka, etc., which are manufactured in India. It is used to differentiate them from indigenous recipes such as fenny, toddy, and arrack, which are collectively called country liquor.

The on-ground pulse check also showed that people prefer to go to the Government corporation run liquor vends in their area. 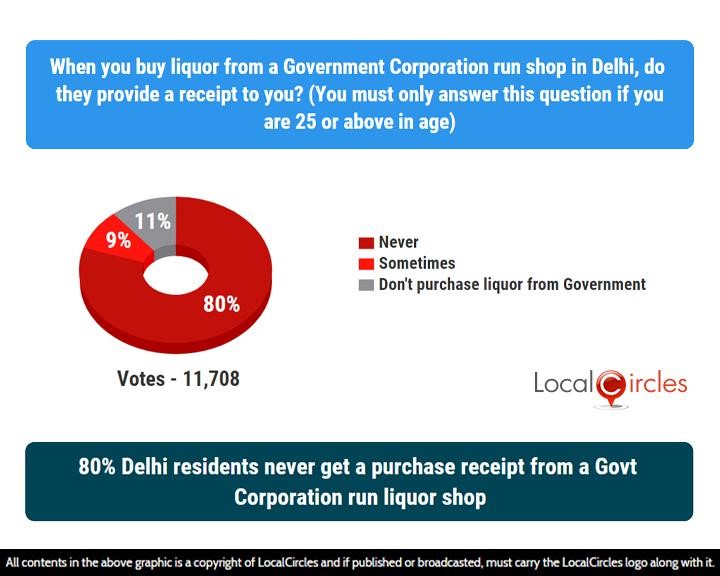 LocalCircles’ on-ground research also corroborated these facts. Although no receipt was given in majority of the transactions, bottle bar code scanning was done by the shopkeeper to record the sale in both Government run, and privately owned vends.

While buying from a Govt corporation owned liquor shop in Delhi, 68% residents can only sometimes or never find their brand of choice 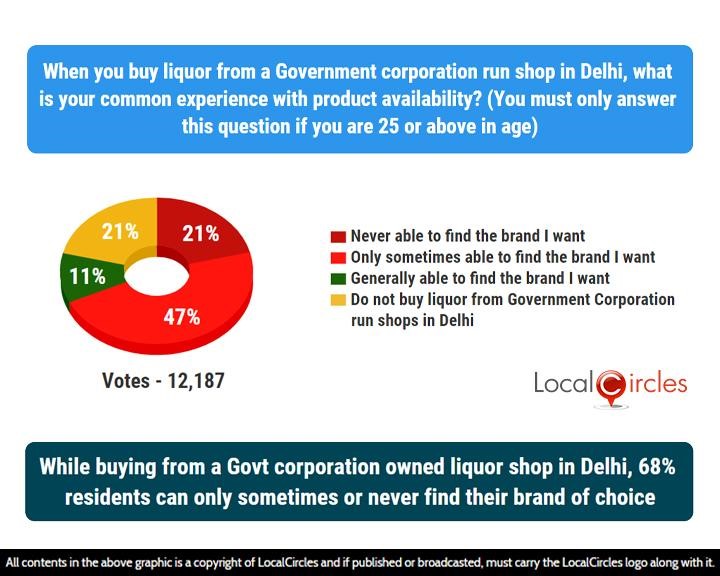 The on-ground research also showed similar numbers where around a third of the respondents said that they are never able to find their desired liquor brands in a Delhi Government corporation run liquor vend.

49% Delhi residents at Govt Corporation run shops buy whatever brand is available at the shop, when their preferred brand in unavailable 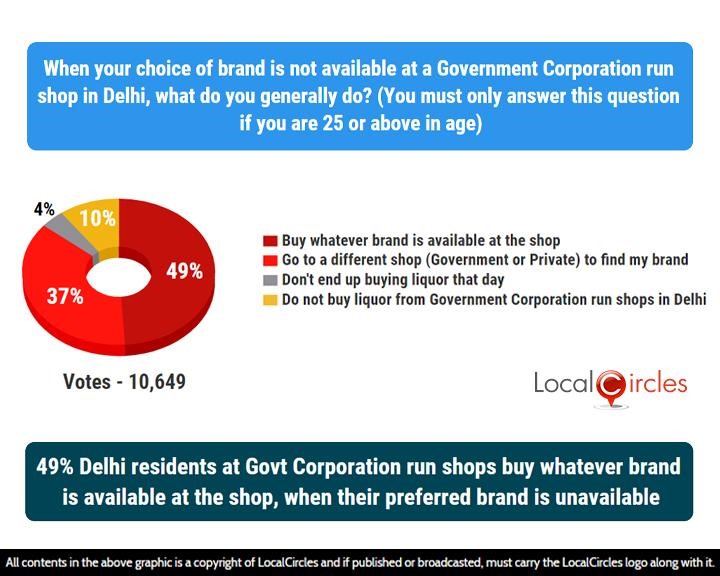 Another surprising trend was brought up by the consumers on LocalCircles about the availability of brands, especially in shops run by Government corporations like DSCSC, DTTDC, DSIIDC etc. They said that many times when they asked for an IMFL brand, they were told that the brand was unavailable and were offered an Indian substitute which was around the same price. Some consumers alleged that shop managers get kickbacks from some of the local brands and hence push their volumes more.

The practice of selling products which gives you more margin is decades old. These products might not be the ones that the consumer desires for, but these are the ones which the shop managers would push either because they get some incentive or kickback. The on-ground research done by LocalCircles confirmed that this malpractice was common at Government vends. 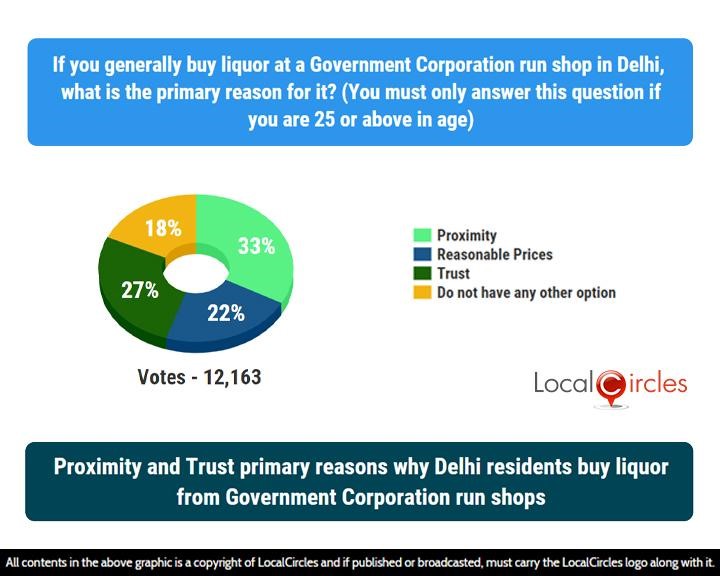 Participants were also asked if they generally buy liquor at a Government Corporation run shop in Delhi, what is the primary reason for it. 33% said proximity, 22% said reasonable prices, 27% said they trusted them more and 18% said they do not have any other option.

In the on-ground study, proximity turned out to be the biggest incentive for Delhi Residents to make a purchase from a Government corporation run wine shop. 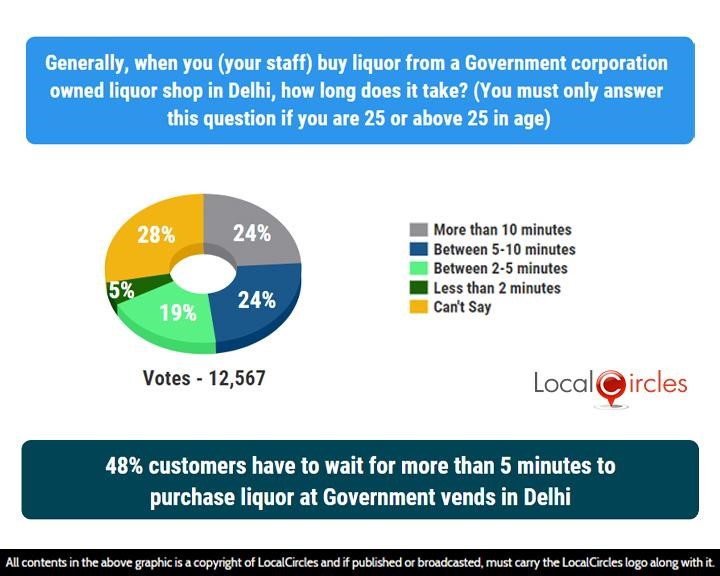 People also complained about the long queues and wait time on the Government liquor shops. They said the big crowd acts as a deterrent for them to buy from there.

In the next question, residents were asked when they buy liquor from Government owned stores in Delhi, how long does it take. 24% said it takes more than 10 minutes, 24% said it takes between 5-10 minutes, 19% said between 2-5 minutes and 5% said less than 2 minutes. 28% were unsure about it. 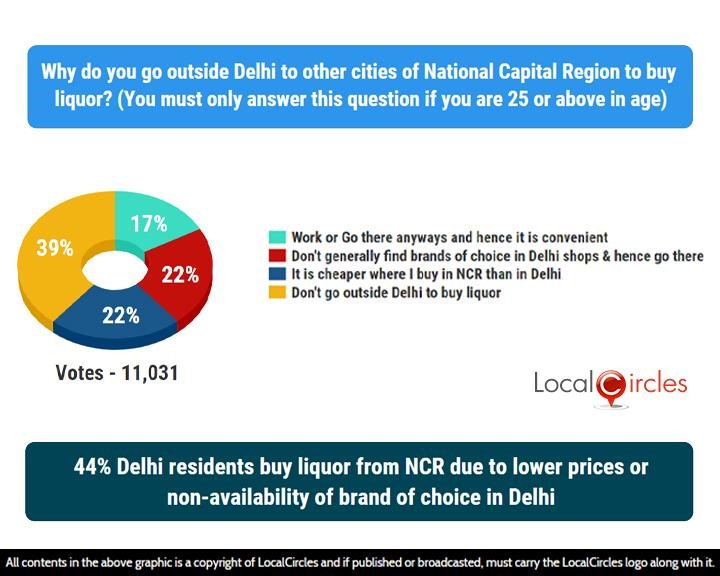 Use of alcohol is considerably higher among men (27.3%) as compared to just 1.6% among women, according to a study conducted by Ministry of Health and Family Welfare.

A large population that lives in Delhi, works in the NCR and travels there every day. According to consumers, prices in places like Gurgaon are lower than Delhi due to lower amount of taxes. Both these facts separately or combined make it logical for the residents of Delhi to buy liquor from the neighbouring cities. 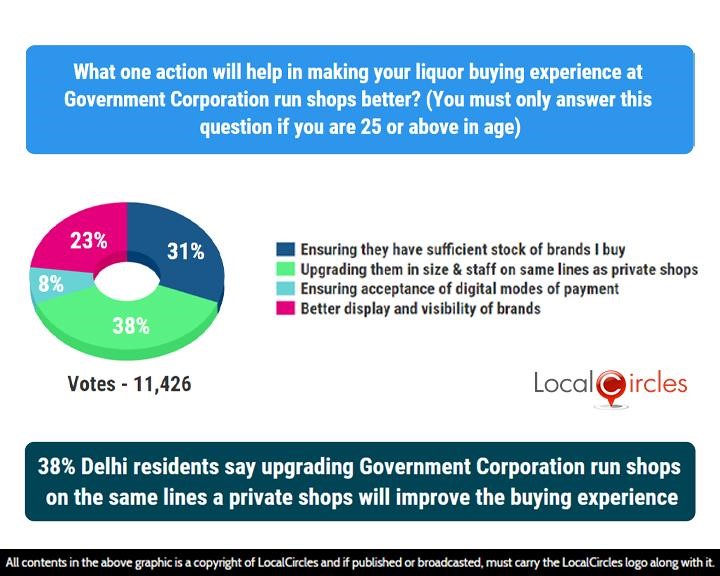 When asked, what actions will help in making their liquor buying experience at Government Corporation run shops better, 38% upgrading these shops in size & staff on same lines as private shops will work for them. 31% said ensuring they have sufficient stock of brands they buy could be a solution. 23% said there should be a better display and visibility of brands and a small 8% said acceptance of digital modes of payment will improve their experience. 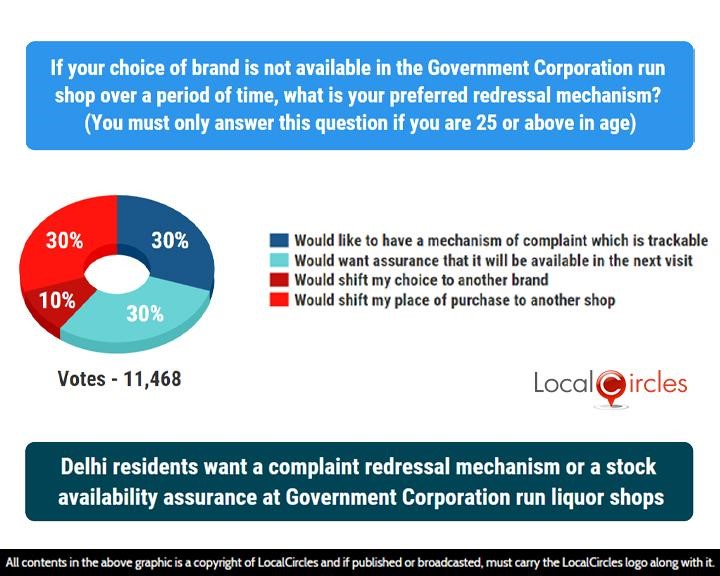 Historically, whiskey has been the drink of choice for Indians but with the millennials being open to experimentation, drinks like vodka and gin are slowly gaining popularity. The key issue raised by Delhi Residents on the LocalCircles platform has been the inability to find the brand of their choice when visiting a Delhi Government Corporation owned vend. Many Delhi Residents also said that they end up buying liquor in NCR cities instead of Delhi because the brand of their choice is not available in the Delhi vends near them. Tax on liquor is a major source of revenue for the Delhi Government and Delhiites buying liquor from NCR also leads to a loss of revenue for the state Government.

The residents of Delhi also discussed various ways in which the buying experience at Government Corporation run liquor shops can be improved. Some of them included setting up of a simple electronic and accountable feedback mechanism at these vends and upgrading these vends to the level of privately owned vends & ensuring stock availability of all popular brands. Some consumers suggested that the Government may also want to consider implementing a better procurement system that is based on what the consumer wanted rather than what they actually got. In absence of these solutions being implemented, some consumers suggested that the balancing of the distribution of Government and Private vends may also provide a solution as private vends are providing better selection and customer experience.

It is important that the Delhi Government takes action to address some of these issues identified by the consumers. The instances of corruption and mismanagement identified by consumers is not only leading to poor consumer experience but loss of excise revenue on sales lost to other NCR cities.