How the Indian Tokyo Olympics contingent inspired the nation: 71% parents say they will support their child taking up a sport as a career beyond cricket

August 11, 2021, New Delhi: Sports fans in India were glued to their TV sets on August 7th to cheer the 23-year-old 2020 Tokyo Olympic champion of the Javelin Throw, Neeraj Chopra, as he registered a throw of 87.58 meters and won the Gold medal for India in track and field. With the national anthem playing at the Tokyo Olympics, many in India had tears of joy in their eyes.

Those tracking the Tokyo Olympics viewed various games on television, a host of websites as well as apps. India brought back home a total of seven medals in track and field—1 gold medal in javelin throw; 2 silver medals in women’s weight lifting (49kg) and men’s freestyle wrestling (57kg); 4 bronze medals in men’s hockey, women’s welterweight boxing, women’s singles badminton, and men’s freestyle wrestling (65kg). On the other hand, the Indian women’s hockey team after dominating Australia in the quarter-finals came very close to lifting the bronze before losing to Great Britain. There were 33 sports and 46 disciplines in the Tokyo Olympics. India was represented by 126 athletes across 18 sports disciplines at Tokyo Olympics. Indian athletes participated in 69 cumulative events.

Olympics Games are held every 4 years, the world’s large sporting event that brings countries from around the world vis-à-vis friends and families together to see the participating players representing their respective countries. In India, it is that time of the year that lifts the spirit of those enthusiastic sportspeople—from swimming, karate, skateboarding, surfing to sport climbing, and others—beyond cricket, which is the most popular sport played almost everywhere in the country.

However, in India, sports other than cricket tend to get recognition only during sporting events such as Olympics. There are only a handful of world-class sporting institutions or coaching schools across the country that train athletes, other than cricket. Historically, most middle-class parents have been reluctant to support their children to take up sports outside cricket as a career with the belief that they do not provide regular earnings and financial stability in the long term. However, Tokyo Olympics seems to have instilled new and fresh energy into the prospects of non-circket sports in India. The likes of Rani Rampal, the Indian women’s hockey team captain have inspired thousands of young girls to get interested in sports while the 4 athletes from Haryana including the gold medalist Neeraj Chopra seem to have energised the entire state. The Chief Minister of Haryana has announced big cash awards, a grant of a plot of land at half the market value for these athletes as well as starting up of sports facilities in their respective villages. All of this is bound to influence the young ones and their parents to take up sports as a career.

To understand if this was in fact the sentiment, LocalCircles conducted a survey to find out how closely did Indian families track the Olympic games this year. It also sought to understand that given India’s performance and the rise of India’s sports celebrities, have Indian parents become more supportive if a child or a grandchild in their family was interested in taking up a sport outside of cricket as their career? The survey received feedback from close to 18,000 respondents residing in 309 districts of India. 66% of the participants were men while 34% were women. 42% of respondents were from tier 1 districts, 29% from tier 2 and 29% respondents were from tier 3, 4 and rural districts.

This seems to be a significant increase in comparison to 2016 where a similar LocalCircles survey had indicated that less than 20% of Indians were tracking India’s performance in Olympics. Citizens via LocalCircles in 2016 had demanded a major overhaul of sports in India highlighting that all sporting bodies must have a sportsperson at the helm instead of a bureaucrat or a politician. A rise to 51% indicates that many more Indians tracked Tokyo Olympics closely. It is also worth noting that on the day of the Women’s Hockey match at the Olympics, India and England cricket test match was being played but most eyeballs were glued to the Women’s Hockey semi-final match. 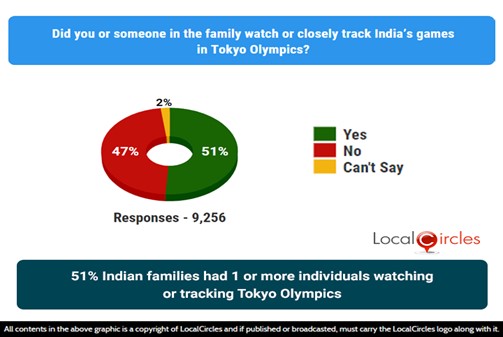 71% Indian parents say if a child in the family was interested in a sport outside cricket, they would support them taking it as a career

The next question in the survey asked Indian parents that if a child or a grandchild in their family is interested in a sport outside of cricket, would they want them to take that up as a career. In response, the majority of 71% of Indian parents surveyed said “yes” they would support such a career plan of a child or grandchild in their family. There were also 19% of Indian parents who said they won’t support their child taking sports as their career. 10% did not have an opinion. This question in the survey received 8,348 responses. 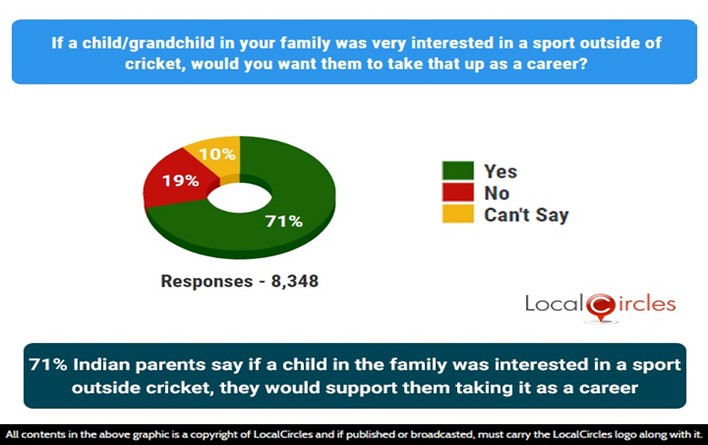 Once again this is a drastic rise from the survey result in 2016 where approximately 40% of parents had said that they would support their child taking up a sporting career outside of cricket.

In summary, the Tokyo Olympics has marked a step-change in the level of interest Indians take in non-cricket sports. With 51% of Indian families having 1 or more individuals watching or tracking Tokyo Olympics 2021 and 71% of Indian parents saying that if a child in their family was interested in a sport outside cricket, they would support them in taking it as a career is a big thumbs up.

The need of the hour is for Central Government and State Governments to find ways to create new infrastructure to promote sports so the existing infrastructure can be maintained and made available efficiently to those with potential. This along with roping in corporations to deploy CSR funds in the development of sports could go a long way in developing many more high-quality Indian sports stars for Paris 2024.