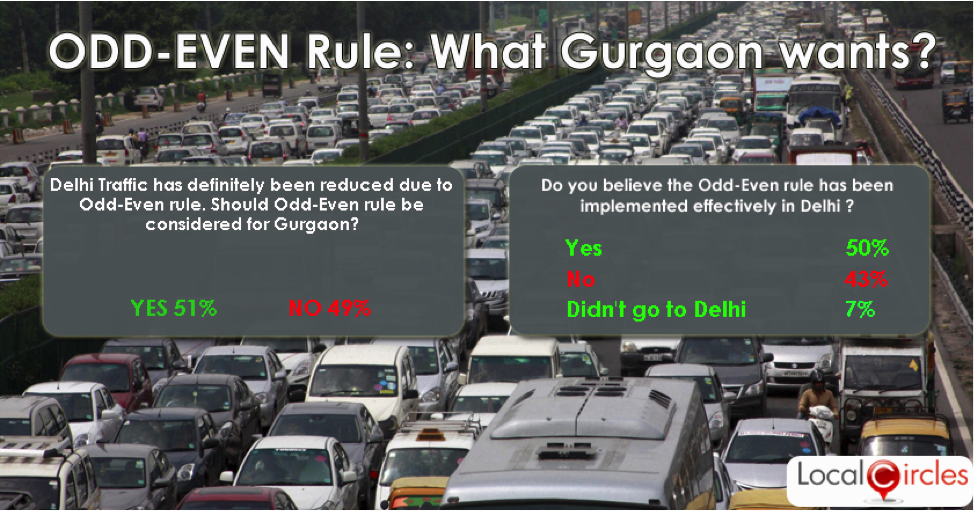 Gurgaon, India, January 15, 2016 – LocalCircles (www.localcircles.com), India’s leading citizen engagement platform today announced results of the Odd-Even citizen survey in Gurgaon. Considering that a large number of Gurgaon residents travel to Delhi for work and leisure every day, many of them have experienced the odd-even rule in the last 2 weeks. This poll was conducted to gauge the success of the rule and get citizen insights that can potentially be used to replicate the odd-even rule in Gurgaon.

This exercise was conducted via a set of polls and free form discussion amongst the citizens of Gurgaon. Citizens have credited the Delhi Government and Police for exceeding expectations on the implementation front with 50% Citizens outlining that the Odd-Even rule has been implemented effectively. Also, while citizen responses suggest that only limited impact on the pollution front has been visible so far, citizens are happy that there were less traffic jams on the roads of Delhi.

51% Citizens also said that there was visibly less traffic on Delhi roads during the first 14 days of the rule and that an odd-even rule should also be implemented in Gurgaon as well.

Based on poll results, it can be interpreted that while Citizens believe that the Delhi Government met their expectations on the implementation front, the clear impact on reduction in pollution is yet to be determined. Citizens, in general are happy with the reduction in traffic and the majority say that the implementation of the odd-even rule in Gurgaon will definitely ease the traffic and could also reduce the pollution levels which have become alarming high. Below are the detailed poll results:

LocalCircles is India’s leading citizen engagement platform that connects citizens at local, city and national level to participate in governance and make their urban life better. LocalCircles has more than 1,000,000 citizens connected on it across the country. All data and poll results are an exclusive copyright of LocalCircles so please give due credit.