4 years of Delhi Government: Citizens of Delhi give thumbs up to work done in Health, Power, School Education and Water Supply

14th February 2019, New Delhi: The Delhi Government run by Aam Aadmi Party today completes four years of governance. This is a Government that raised expectations of people and came to power claiming to be the common man’s Government. LocalCircles conducted a 9-point poll among citizens of Delhi which received over 37,000 votes to understand what people feel about the Government’s performance. LocalCircles has been conducting this survey each year over the last 4 years and to understand the change over time, a comparison to previous years has also been created.

Overall the results indicate that the Delhi Government has delivered improvements on basic necessities like water supply, power supply, health and school education. The results also show that people of Delhi are not happy with lack of efforts by the Delhi Government to improve air quality. On the corruption front, after 4 years people feel that corruption in areas governed by Delhi Government has reduced. However, the percentage of people believing the same has reduced as compared to year 3 highlighting deterioration over the last 12 months instead of improvement

LocalCircles also conducted a similar exercise in Feb 2018 at the completion of 3 years of Delhi Government and the areas of basic necessities like water supply, power supply, health and school education, there has been steady improvement from year 3 to year 4. Efforts of Delhi Government to reduce Pollution or improve Air quality is one area that has shown deterioration while corruption levels have increased slightly, indicating no progress in the 4th year.

Comparison: Performance at 3 years vs 4-years

LocalCircles had conducted a similar study when AAP’s Delhi Government had turned 3 years old. The results of the 3-year vs 4-year comparison are as follows: 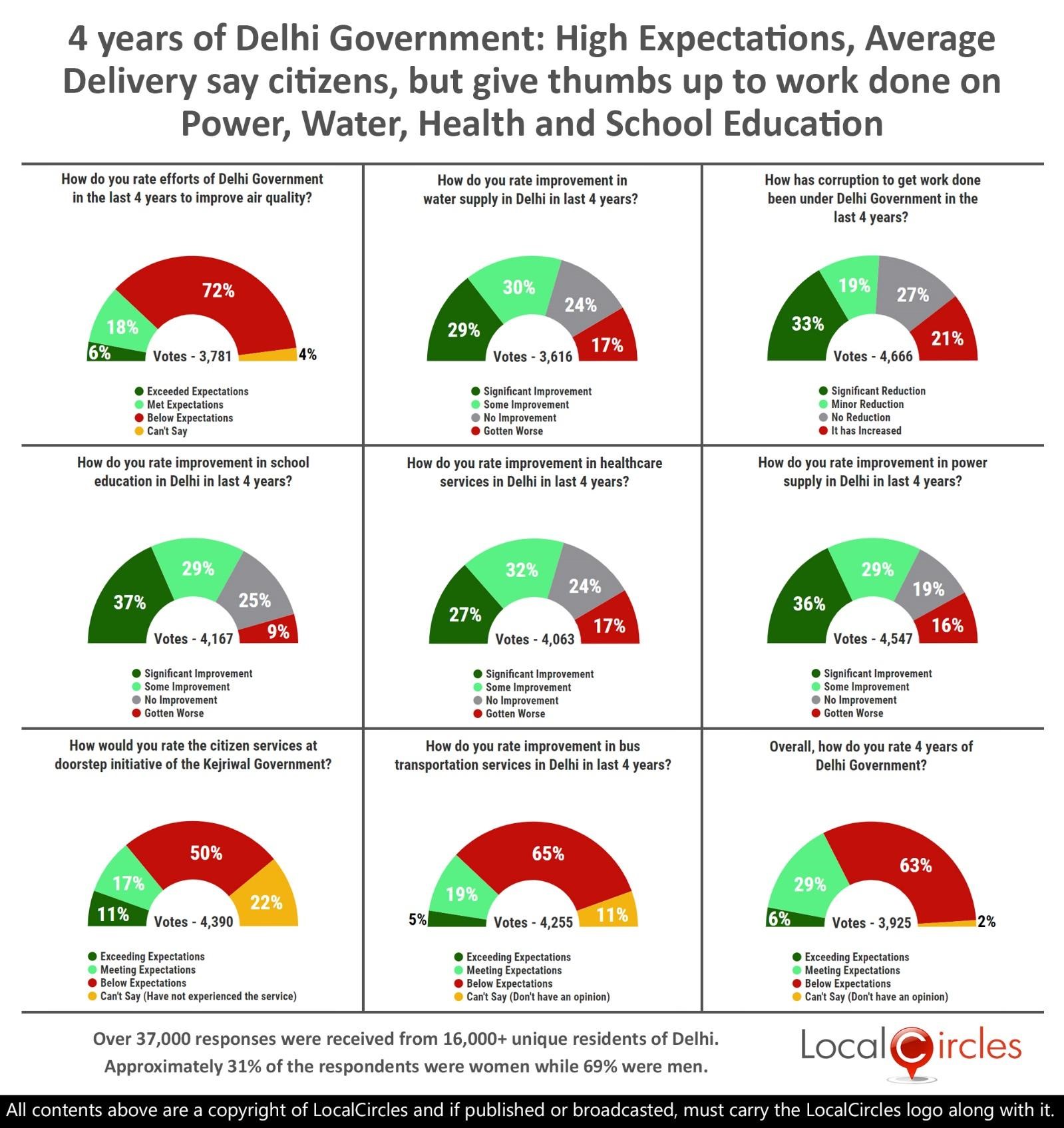 Performance of Delhi Government over time 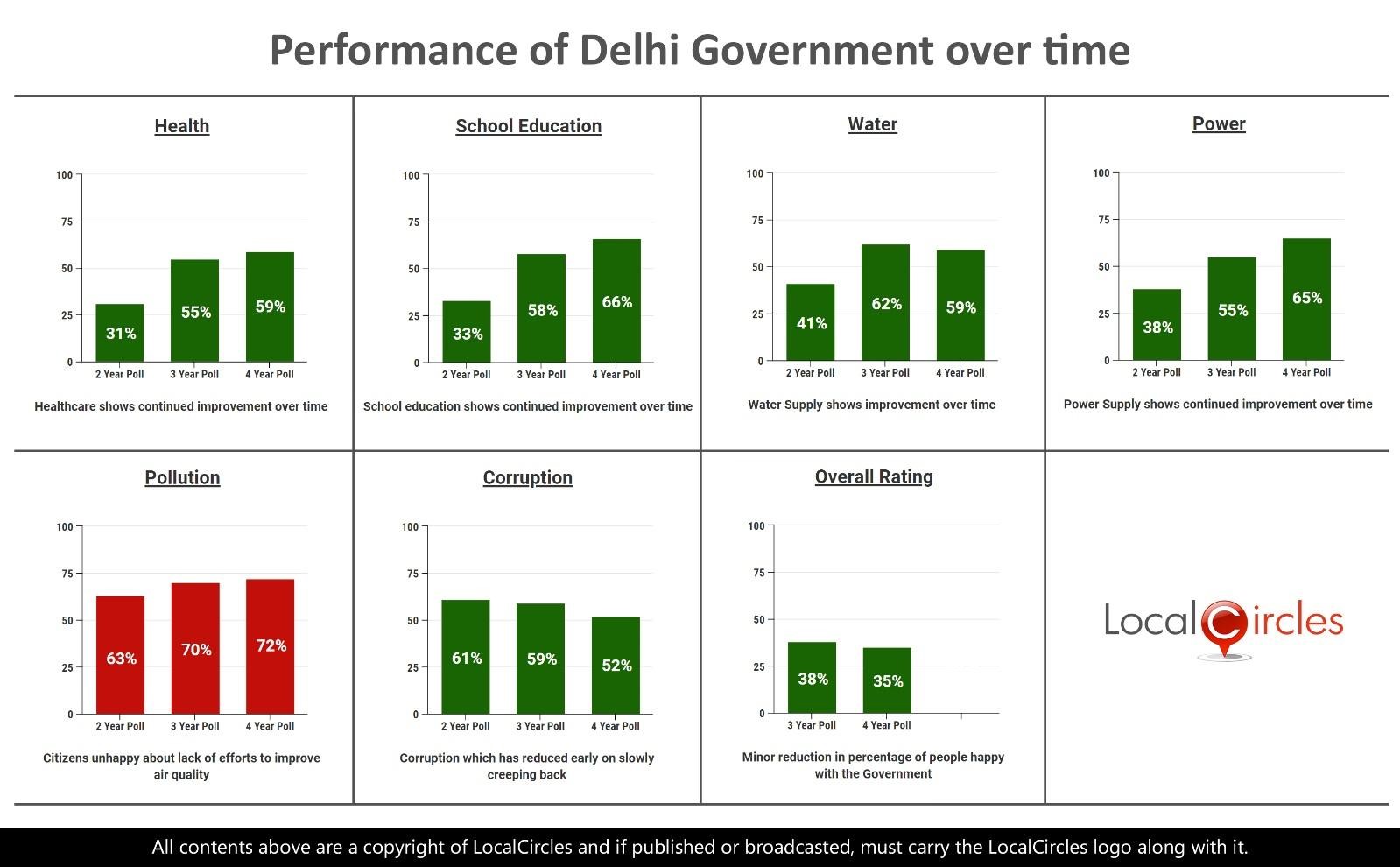 Below is the breakdown of the report by individual polls: 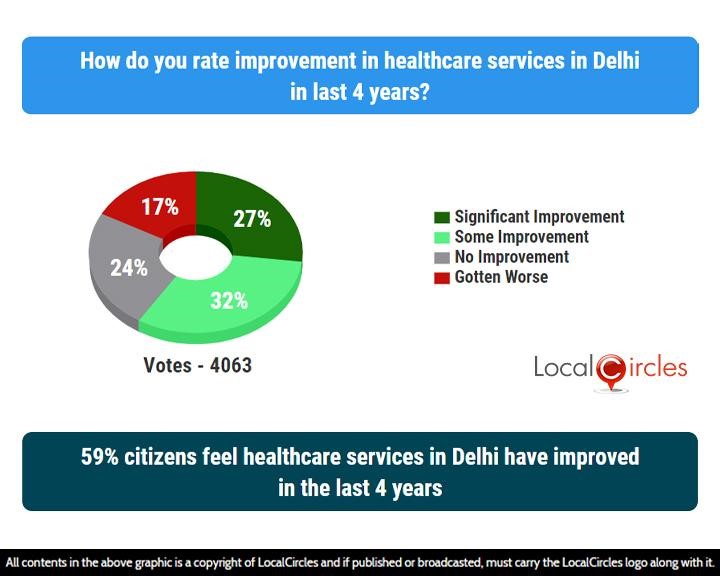 The first question asked how people how they rate the improvement in healthcare services in Delhi in the last 4 years. They were specifically asked to keep availability, affordability and quality as key parameters. 27% said there was significant improvement and 32% said there was some improvement in this area. 24% felt there has been no improvement while 17% felt the situation has gotten worse. Mohalla Clinic project has been liked by citizens as more than 180 clinics have been opened in different parts of the city. Even in Delhi Government hospitals according to citizens, availability of Doctors has improved. Also, many citizens feel that the Government has not been able to restrict poor and unethical practices by private hospitals and pathology labs. 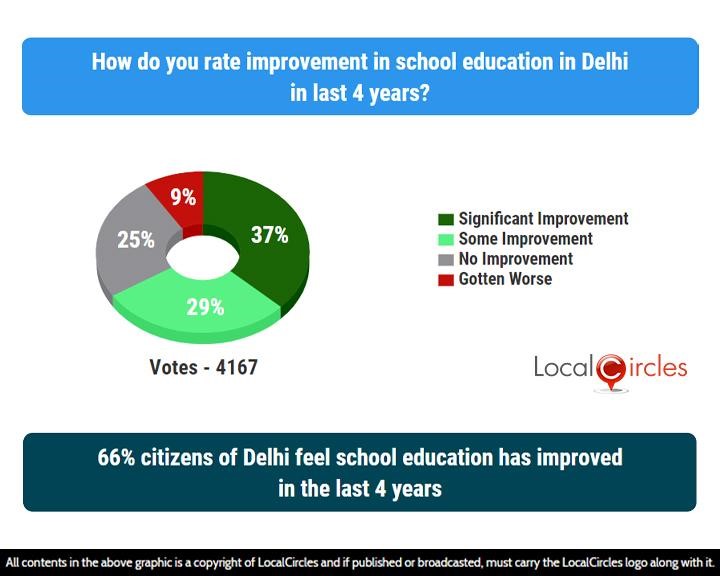 When it came to improvement in water supply in Delhi in the last 4 years, 29% said there was significant improvement and 30% said there was some improvement. 24% said there was no improvement at all while 17% said the situation had worsened. Citizens were asked to consider key parameters as availability, billing accuracy and quality. While the tanker mafia has been cracked upon for the large part, many societies are paying bribes regularly to jal board officials in their area to use motors and pump ground water. 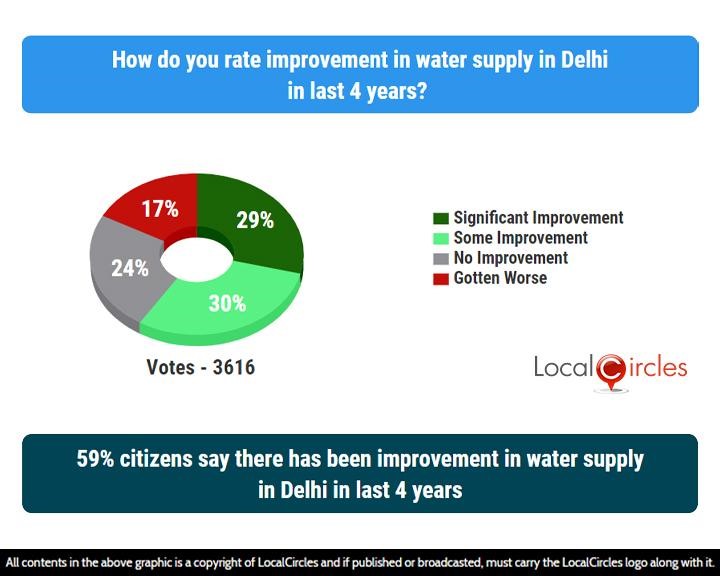 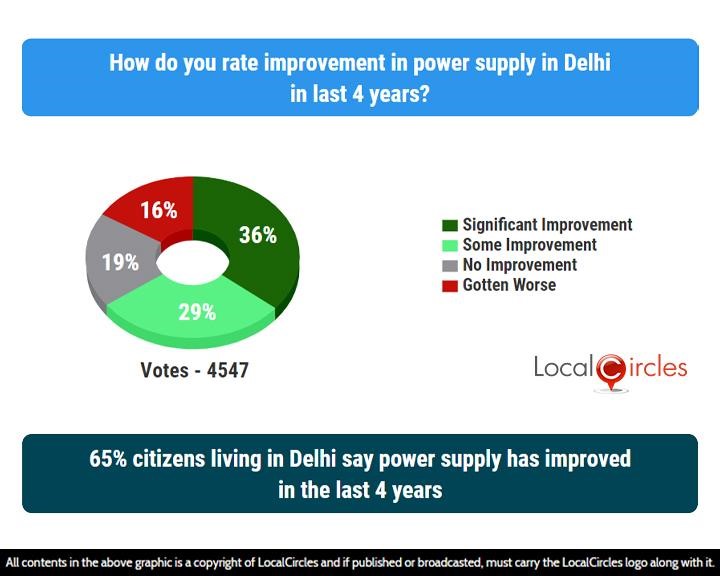 Power supply has been an area of concern in Delhi for many years with peak summer season seeing long power cuts in different parts of the state. Considering availability and affordability as the key parameters, 36% citizens said that the situation of power supply has significantly improved in Delhi in the last 4 years whereas another 29% said that it had improved a little bit. 19% said there has been no improvement in power supply and 16% said it had gotten worse. Once again, lower power tariffs over a period of time have made many residents of Delhi happy.

Following question asked citizens to rate the state of corruption in the state in the last 4 years. 33% said the reduction in corruption was significant, 19% said it was minor, 27% said there was no reduction and 21% said corruption had increased. Citizens were clearly told that Police and Municipal governance does not come under jurisdiction of Delhi Government and it should not be included in the evaluation for fair assessment. People do feel that Corruption in the last 4 years has reduced in areas of Water Supply, Power Supply, Healthcare, School Education, Transport/RTO, Trade Licenses, etc. However, reports about collusive corruption keep coming up in LocalCircles anti-corruption community where Businesses and Administrators are colluding for tenders, contracts or simply transactional cases where both parties benefit, and disclosure is in the interest of none 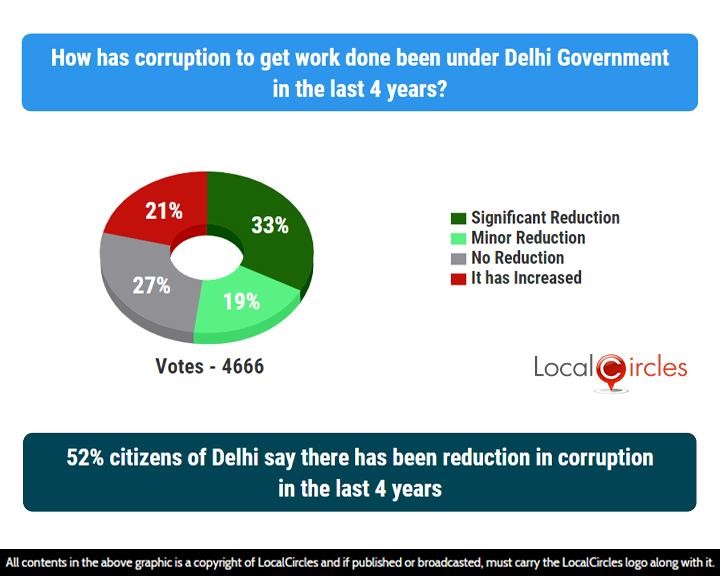 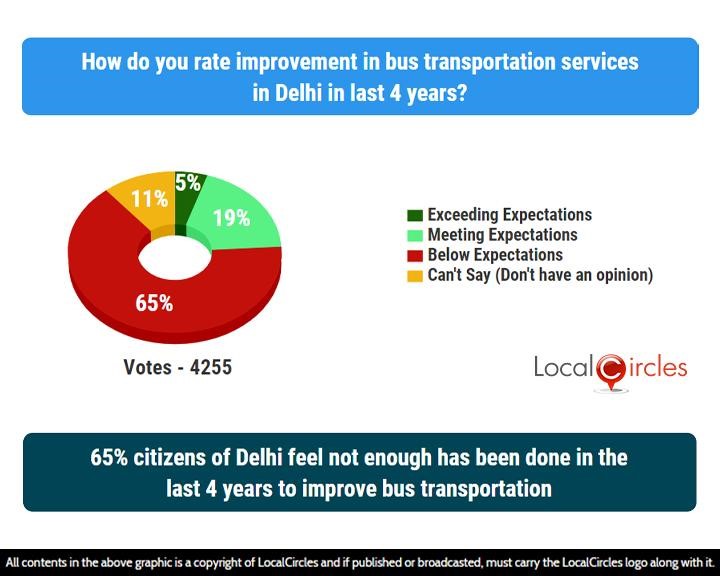 65% citizens of Delhi also feel not enough has been done in the last 4 years to improve bus transportation. 19% said the work done had met their expectation while only 5% said it had exceeded expectations. 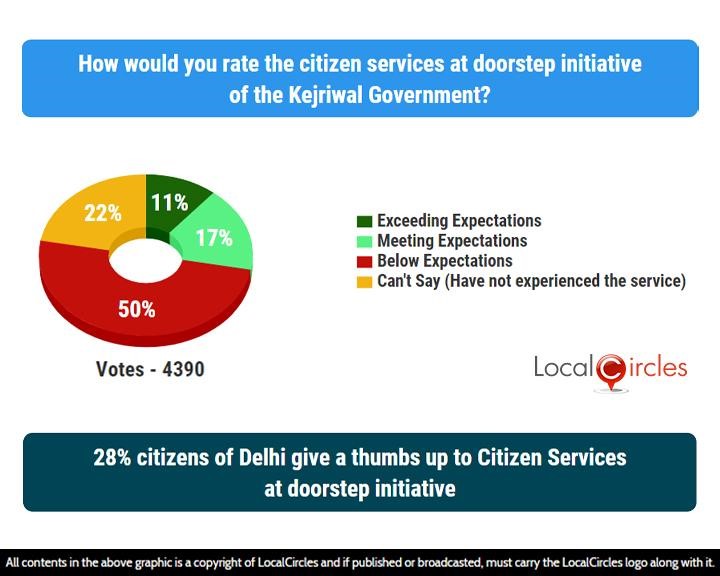 The much-hyped citizen services at doorstep initiative was launched in Delhi by the Kejriwal Government in 2018. 28% Delhiites have already given a thumbs up to this initiative while 50% said it was below expectations. 22% said they had not used the service yet. Given the fact that it has only been 6 months since the initiative was launched, it is still a sizable achievement. The real test would be in 2019 where it should become apparent whether the initiative can scale up successfully. 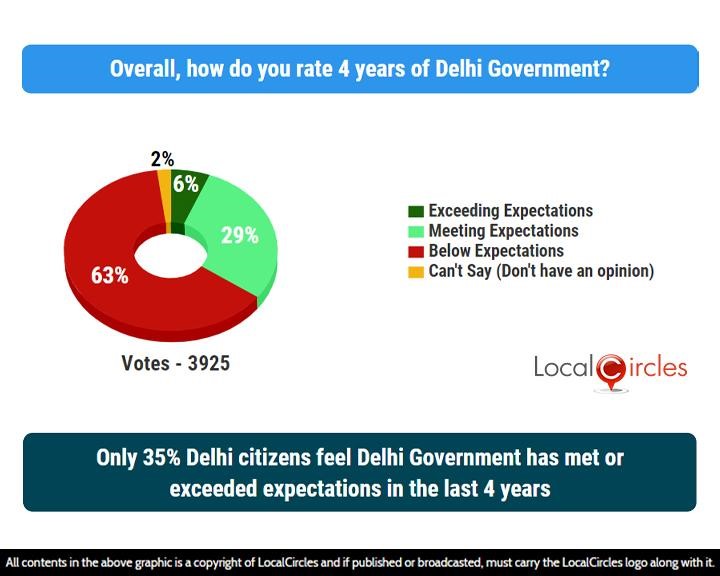 Over 37,000 responses were received from over 16,000 validated residents of Delhi. 69% of the participants in this survey male were while 31% were female.