Restaurants forcing service charge on consumers despite Government guidelines; 60% who went to an air-conditioned restaurant in the last 30 days paid it; want CCPA to issue penal notices on suo moto and complaint basis

June 25, 2022, New Delhi: The Government of India has made it clear that payment of 'service charge' at restaurants is entirely voluntary and at the discretion of consumers. The Department of Consumers Affairs recently issued a statement cautioning restaurants on forced levying of “service charge” in the bill. However, many consumers on LocalCircles platform continue to express their grievances saying that restaurants are still collecting service charge from consumers by default, for air-conditioner, per se.

LocalCircles since 2017 has been creating awareness on the issue of service charge collected by air-conditioned restaurants, raising it for the first time in late 2016, which was then escalated to the Department of Consumer Affairs (DoCA), which comes under the Ministry of Consumer Affairs, Food and Public Distribution. Subsequently, DoCA declared restaurant service charge as an unfair trade practice in 2017. Then the Central Board of Direct Taxes (CBDT) has asked the Income Tax Department to examine the Income Tax Department to examine the books of restaurants to see if there is any under-reporting or non-reporting of service charge collected by them. DoCA officials have met with the National Restaurant Association of India to discuss the issues pertaining to service charge levied by restaurants and the association maintained that this charge was not illegal.

Per LocalCircles’ survey recently conducted in May 2022, only 29% of consumers had said they didn’t pay service charge at restaurants. To understand the change over time, LocalCircles has conducted another survey to track under-reporting or non-reporting of service charge collected by restaurants. The survey received more than 23,000 responses from citizens residing in 296 districts of India. 64% of the respondents were men while 36% were women. 48% respondents were from tier 1, 31% from tier 2 and 21% respondents were from tier 3, 4 and rural districts. 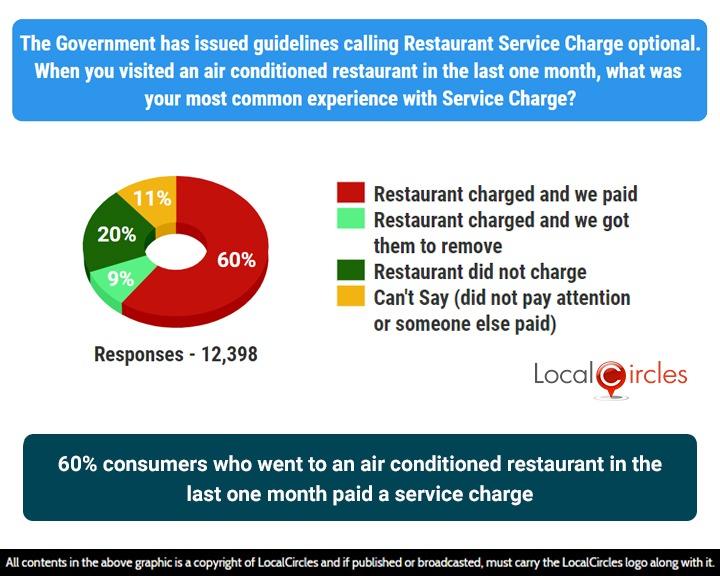 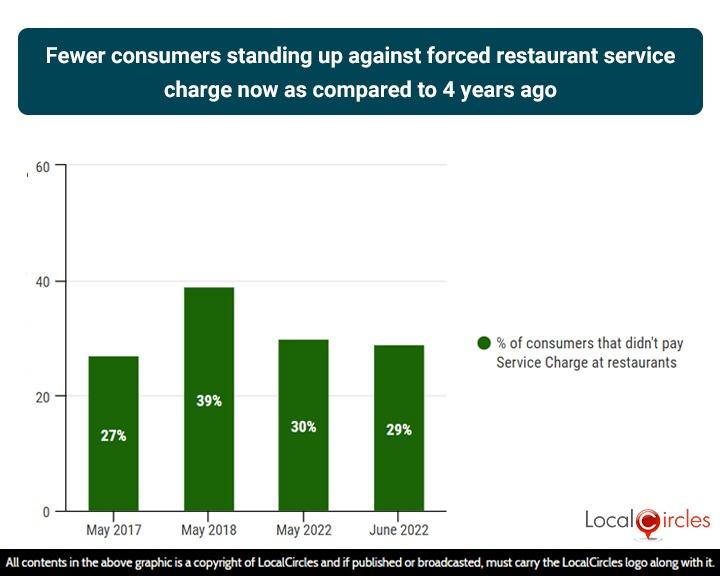 The following question asked consumers, “How should the CCPA act against restaurants still levying forced service charge in bills?” In response, 19% said “Issue penal notices against all such restaurants on suo moto basis”, 10% said “Issue penal notices against all restaurant where there is a consumer bill with service charge levied”, and 39% said “Do both of the above”. Breaking down the poll, 13% said “Government should just ask State Government to act against violating restaurants in their states”, 16% said “Government should not take any penal action and let the consumer take up the matter with the restaurant”, while 3% did not have an opinion. On an aggregate basis, 68% of consumers want CCPA to start issuing penal notices to restaurant levying service charge based on consumer complaints/bills and on suo moto basis. 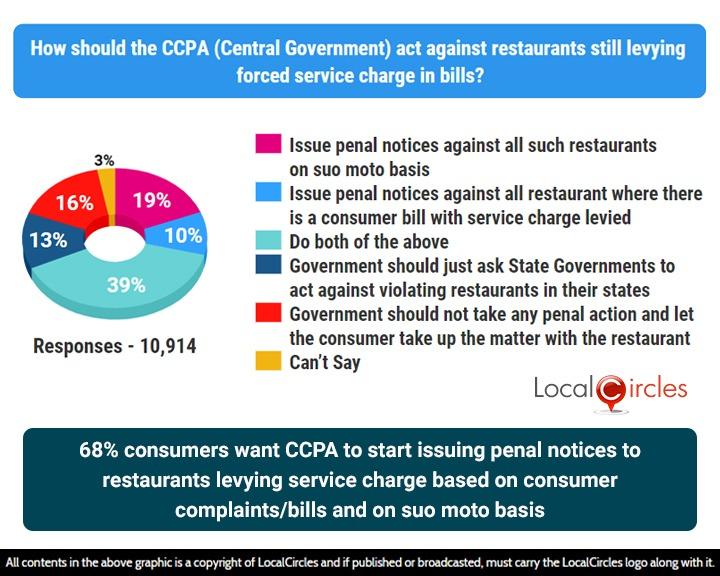