December 21, 2020, New Delhi: The Government of India just announced a ban on all flights from United Kingdom from 23:59 hrs Dec 22nd till Dec 31st in light of the new virus mutation that has been reported in London and several parts of the United Kingdom

Since the UK Prime Minister Boris Johnson, said “the new variant may be up to 70% more transmissible than the old one.” Followed by many nations like Ireland, Germany, France, Italy, the Netherlands and Belgium imposing a ban on the flights from UK, as a precautionary measure, citizens of India had been raising the demand for Government to impose a similar ban on flights from UK.

Notably, 50% citizens want bubble flights from impacted countries suspended, while 41% want mandatory 14-day quarantine for arriving passengers instead. Only 6% of citizens voted that India should continue with current rules treating flights from these countries similar to others. The question received 7,091 votes from citizens 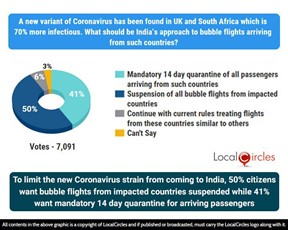 Basis feedback from citizens, LocalCircles escalated the findings of this survey with senior leadership of the Government of India for immediate consideration. Commenting on the flight ban, Sachin Taparia, Founder & Chairman, LocalCircles said “This is fast and decisive action on part of Government of India and citizens are appreciative of the same. India has come a long way and cases have reduced from almost 90,000 a day in September to 25,000 a day. By acting on this, India can hopefully ensure that the downward trajectory continues”, “Also, the approach of a flight ban that lasts 9 days only for now makes sense to see how the situation develops and a call for resumption or ban extension can be taken on Dec 31st ”, continued Taparia.