Teaching staff effectiveness and refunds big issues consumers have with edtech platforms; 66% surveyed demand regulation of such platforms by Government 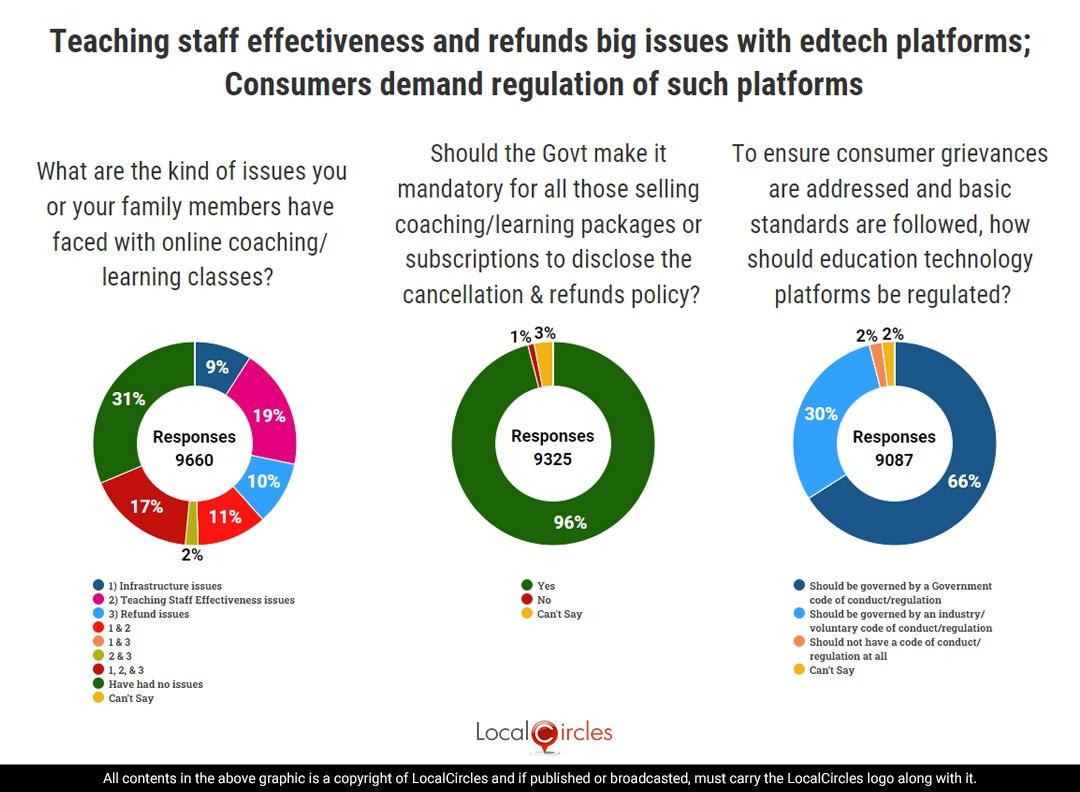 June 8, 2022, New Delhi: The COVID pandemic has been a boon for online education or edtech platforms in India. The expansion of the internet and accessibility has led to an increase in the demand for online learning. Though there has been bit of speed bump in the last few months due to global economic scenario and reducing COVID cases, online education start-ups have raised USD 2.3 billion in 2020 and USD 3.8 billion in 2021 as per a report by market intelligence firm HolonlQ. The report also states that India’s online market is expected to grow more than USD 3.5 billion by 2022.

That said, citizens in various forums vis-à-vis on LocalCircles’ platform have highlighted the issue of getting refunds upon cancellation of subscriptions/packages with edtech platforms as a major problem. The majority of parents of students taking courses on edtech platforms have expressed their troubles in getting a refund from them. Parents also claim to have been misled by sales representatives of some edtech platforms. Per media reports, an edtech platform recently shut down, with no refund of fees to consumers. Furthermore, since many parents have been paying through EMI, cancellation of the same would reflect in their credit score. Some edtech companies allegedly exploit low income parents through loan based subsciptions, landing them in debt. Few parents have also taken up the issue with consumer courts seeking a refund from coaching centers, however, with limited success. Byju’s was ordered to pay damages to consumers in at least 3 different cases. BYJU's has been time and again criticised over its hard-selling and even mis-selling courses to parents. Parents who cannot pay the fees upfront are offered with credit options, including payment integration for credit card holders and EMI options, tie-up with NBFCs or banks that provide education loans. As per media reports, citing sources, dissatisfied parents can't pull out easily as they end-up having to deal with the loan providers.

Given the concerns reported by parents against online coaching or edtech platforms, especially around refunds, grievance redressal and teaching staff quality, LocalCircles has conducted a national survey. The idea behind the survey is to quantify consumer issues and if found to be significant, escalate them for Government intervention. Also, the survey attempted to understand whether citizens thought it is an appropriate time to regulate the sector via a code of conduct/regulation. The survey received more than 27,000 responses from citizens residing in 323 districts of India. 62% respondents were me while 38% respondents were women. 43% respondents were from tier 1, 32% from tier 2 and 25% respondents were from tier 3, 4 and rural districts.

The question in the survey asked citizens about the kind of issues they or their family members have faced with online coaching/learning classes via edtech platforms. In response, 9% of citizens said they have faced “(1) Infrastructure issues”, 19% said they have issues with the “Teaching staff effectiveness issues”, and 10% had “Refund issues”. From the aforementioned options, 11% had “1 & 2” issues, 2% faced “1 & 3” issues, 17% had all “1, 2 & 3” issues. Only 31% of citizens said “Have had no issues”. Of 9,660 citizens participating in this survey’s question, none of them chose from the “Can’t say” option, which meant that citizens’ surveyed or their families are taking some form of online coaching/learning classes, indicating online studies making a huge impact in Indian households at the time of the COVID-19-induced pandemic. On an aggregate basis of the findings, 69% of those surveyed taking coaching/learning classes have faced issues with it.

Typical cases studied by consumers include edtech platforms selling them packages upfront followed by a mediocre learning experience delivered by the platforms in some cases. The dissatisfaction could be due to teacher’s ineffectiveness or the student being unable to learn in an online set up. Regardless of the situation, the lack of willingness of many of the edtech platforms to permit cancellation of the package/subscription and refunding the money. The other issue reported was that of the lack of infrastucture available with edtech platforms to deliver quality education to the student. 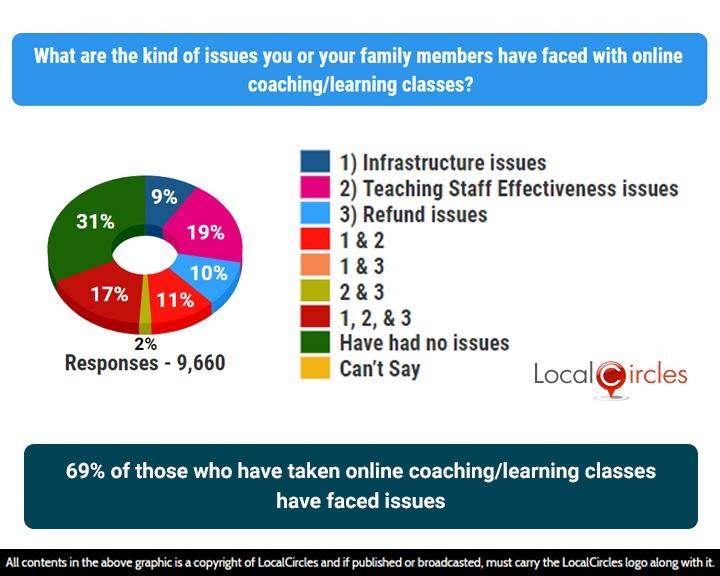 The top-3 issues people have faced with online coaching/learning classes have been effectiveness of teaching staff, infrastructure and refunds upon cancellation

If reasons given by citizens are evaluated in the order of priority, 49% are facing issues with the “Teaching staff effectiveness”. Another 37% are facing “Infrastructure issues”, and 29% are facing “Refund issues”. 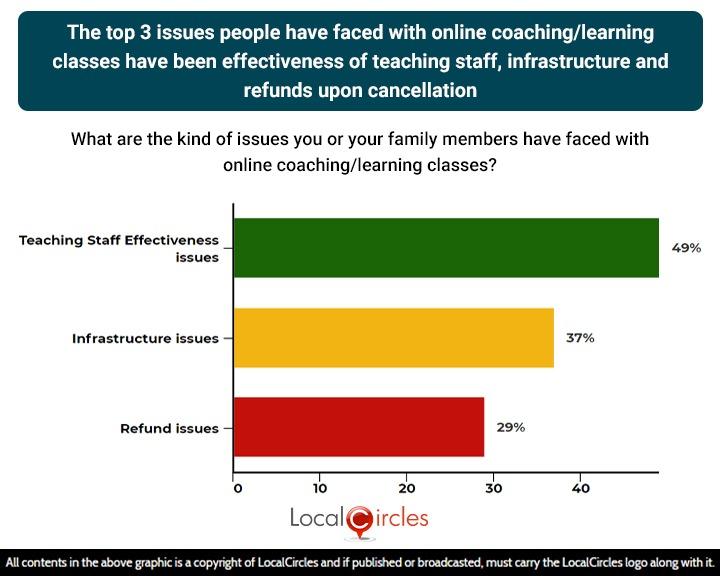 There have been several instances where parents have had reported difficulty obtaining a refund after their child quit or classes stopped. Some parents have had to take the issue up with higher authorities in order to get a refund. The District Consumer Disputed Redressal Commission Chandigarh recently announced that no fee can be illegally held by coaching institutes for the period in which no coaching is being availed by a student. It also ordered a full refund of fee from a city-based coaching institute. The announcement came after a student approached the commission as a coaching institute denied her request for a refund.

Take cognisance of the 29% of citizens facing the refund issues, the following question in the survey asked them if the Government should make it mandatory for all those selling coaching/learning packages or subscription to disclose the cancellation and refunds policy to every customer and upload on their website/apps. In response, the majority of 96% of citizens said “Yes”. Only 1% of citizens said “No”, and 3% did not have an opinion. This question in the survey received 9,325 responses. 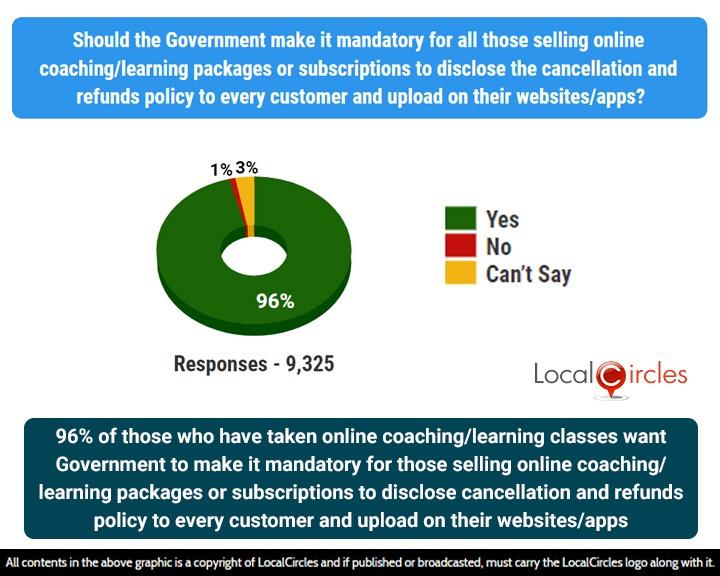 96% citizens want code of conduct/regulation created for edtech platforms; 66% want it to be a Government code and not a voluntary industry code

There have been numerous complaints against edtech platforms and online coaching classes in consumer forums. Adaptability or knowledge of technology amongst teachers, infrastructure, and technical issues were cited as major problems facing students taking online courses. Some consumers have reported that certain edtech platforms are indulging in predatory marketing practices and unethical conduct which include auto-debiting course fee from parents despite parents stating their wish to discontinue the course. This led to the Government issuing a warning against such practices of some edtech platforms while mulling a common policy to regulate the industry last year. However, industry leaders including Byju’s, Vendantu, Upgrad and others have formed an industry body to self-regulate India EdTech Consortium (IEC) under the umbrella of the tech industry lobby, Internet and Mobile Association of India. 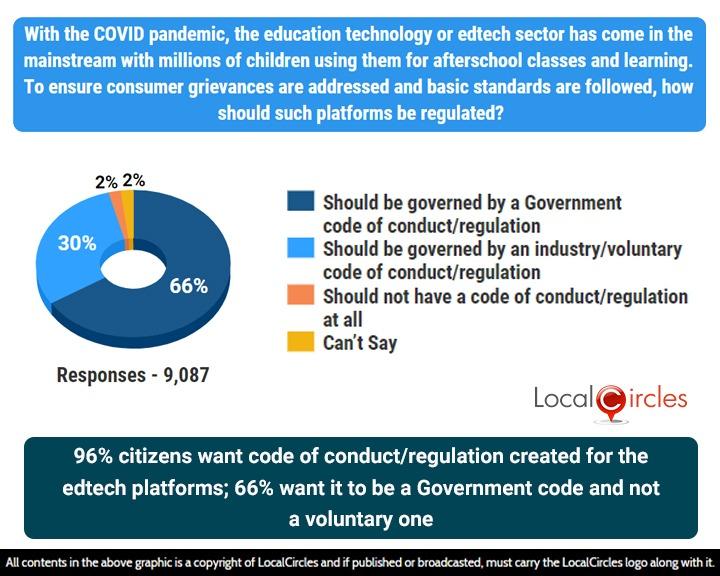 In summary, 69% of those who have taken online coaching/learning classes have faced 1 or more issues. The top-3 issues people have faced with these classes are “effectiveness of teaching staff”, “infrastructure” and “refunds upon cancellation”. When parents or their children wanted to opt-out of the course, 29% faced issues with refunds. Hence it is important that the Government make it mandatory for those selling coaching/learning packages or subscriptions to disclose cancellation and refund policy to every customer and upload them on their website/apps. This has the support of 96% of citizens surveyed. When asked about whether a code of conduct/regulation is needed for edtech platforms, 96% of the citizens surveyed supported such a move. 66% want it to be Government code of conduct/regulation while only 30% support a voluntary code of conduct/regulation.

LocalCircles will share the findings of the survey with relevant stakeholders in Government of India so citizen ask is given the due consideration in the policy formulation process.