Medicines during COVID-19 lockdown: Local chemists prove to be the go to for consumers with much better availability than ePharmacies

April 8, 2020, New Delhi: As the 21-day lockdown was announced in India, many citizens rushed out to buy important items but were unable to buy many essential commodities including medicines, either due to the rush or due to non-availability. Although the Government had earlier said that delivery of all essential goods including food, pharmaceuticals, and medical equipment through retail stores and ecommerce will be allowed, people from across the country in the first week reported on LocalCircles the difficulty they had in finding medicines. The situation however has improved in the local markets while the ePharmacy apps according to consumers are still struggling to deliver.

LocalCircles conducted a survey to check the consumer pulse on their experience of buying medicines in the last 7 days from either a retail store or from an online pharmacy. The 2-poll survey received 16,829 responses from consumers located in 165 districts of India. 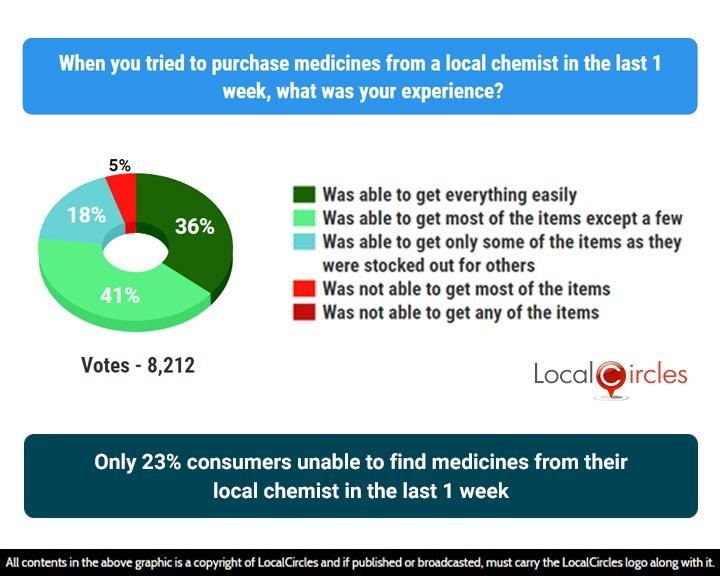 Earlier, consumers had reported on LocalCircles the stock outs on sanitizers, wipes and masks at local chemists. While those are still hard to find, the availability of medicines has become reasonably high at the local chemist in the 75%+ range. Consumers have reported lower availability levels in common drugs used to control blood pressure and diabetes. Some chemists have reported on LocalCircles, issues faced in getting supplies from the distributors and whole sellers but the situation has slowly improved over the last one week. Some medicine distributors who are part of LocalCircles have indicated that the supply chain is well stocked and they do not anticipate any shortages in the coming weeks barring unusual events. 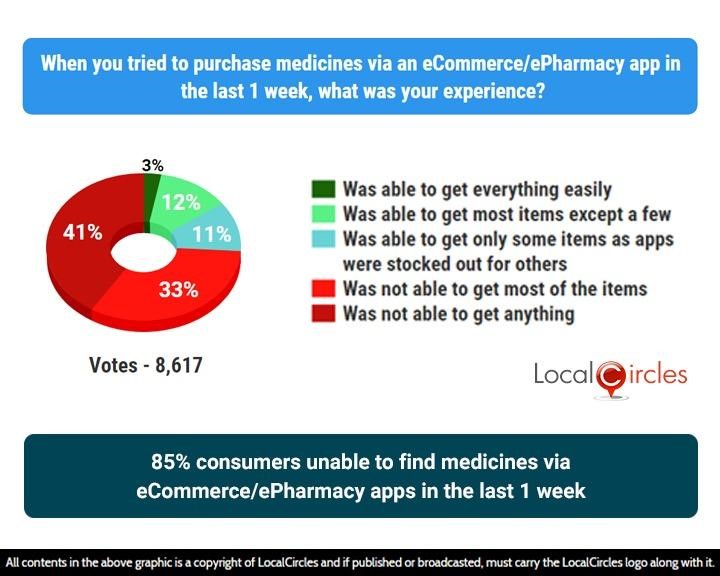 Many ecommerce apps selling medicines like 1MG, Pharm Easy, NetMeds etc. had reported a spike of 100 to 200% in demand when the lockdown was announced but they were unable to deliver orders due to restrictions put in place by the Government. These companies had earlier reported their inability to deliver shipments to as the movement of truck carrying stocks as well as delivery agents was restricted by the police, even when medicines were labelled as ‘essential goods’. Consumers have also reported that some online pharmacies take orders but promise delivery time of 20-30 days, while some also cancel orders close to the delivery date.

The collective view is that both the offline and online channels should be made fully operational to stock and deliver medicines. This will help limit the number of people that venture out to buy medicines. District Administrations across the country must ensure that those ePharmacy platforms and large pharmacy retail chains are not subjected to the requirement of curfew passes. Also, local chemists and their delivery staff should be granted curfew passes without hassles.