November 2, 2021, New Delhi: Diwali in India brings cheer with lamps, lights, sound, food, shopping and socialising taking place across the country. One of the traditions has been the bursting of crackers over the 3-4 days period of Diwali. However, with rising pollution in Northern India over the last decade around Diwali due to stubble burning, increased vehicular traffic, cracker burning has largely been reduced to the Diwali day.

The situation in 2017-2019 was so bad that on for several days the AQI levels crossed 1000 making it extremely difficult to breathe. Though the situation was slightly better in 2020 due to attempts by the Government to reduce stubble burning in farms of Punjab, Haryana and UP, AQI levels exceeding 700 were still observed on several days in Delhi. Many other cities in North, Central and Eastern parts of the country also observed poor AQIs on Diwali and the weeks thereafter. Of the top 50 polluted cities in the world, over 35 of them are in India. This year, in many North Indian cities the AQI has already crossed 300.

People in the last few years have been divided on the use of crackers. While there is a section of the population that links crackers directly to pollution, there is also a section that believes that the pollution is largely due to other causes like stubble burning by farmers and that the annual Diwali festivities should not be hampered by banning of crackers. The Supreme Court of India has issued a strict order that prohibits fireworks that contain a Barium salt, a toxic chemical. However, there is no total ban on the use of firecrackers, and green crackers have been allowed to be used during the festival. Different states like Tamil Nadu, Karnataka, West Bengal, Delhi, Chhattisgarh, Maharashtra, Punjab, Uttar Pradesh, Assam etc. have passed their own orders some putting a total ban on firecrackers like Delhi and some permitting green crackers. Many have defined times when crackers are permitted.

2 in 3 Indian households will not burn crackers this Diwali

Firecrackers that are available in India are mostly categorised according to the sound they make, and only those crackers are allowed for sale that do not exceed the permissible sound limit. Green crackers, for instance, make lower emissions and are made in a way that suppresses the dust when they are burnt. Unlike regular crackers, they do not contain harmful chemicals such as lithium, arsenic, barium, lead, etc. — and the impact is somewhat lower. The first question in the survey asked citizens about their plan to burst firecrackers this Diwali. In response, the majority of 45% citizens said they “will not be burning any crackers”. However, there were 15% of citizens who said that they “will be burning green crackers” 11% “will just be burning sparklers but no crackers”, and 6% “will be burning regular crackers”. 5% of citizens said they “do not have a choice as crackers are banned in my city/district”, while 10% couldn’t say, and 8% said “not applicable or do not plan to celebrate Diwali this year”. The 8% is an important category who do not plan to celebrate this year. Many households have lost a family member this year or have a family member still struggling with long COVID or other ailments and hence not celebrating. There are others who are facing a financial crisis due to a lost livelihood. In a typical year this percentage is 2-3%. Coming to crackers, on an aggregate basis, 2 in 3 households will not burn crackers this Diwali. This question in the survey received 9,363 responses.

42% households in favour of some type of ban on cracker burning on Diwali; 53% not in support of any restrictions

Different states have announced their own bans, permissions and timings when crackers can be used. The following question sought to understand citizens’ pulse on what should be done to limit crackers on Diwali given the pollution situation in many parts of India. Notably, the majority of 53% of citizens surveyed said there should be “No restrictions need to be place as crackers are not the root cause of pollution”. 28% voted for a “National ban on crackers”, 8% are in favour of “State-level ban on crackers where pollution levels are high”, while 6% want “District-level ban on crackers”. 5% did not have an opinion. On an aggregate basis, 42% of households surveyed are in favour of some type of ban on cracker burning. However, 53% are not in support of any restrictions as they feel that bursting crackers are not the root cause of pollution in India. 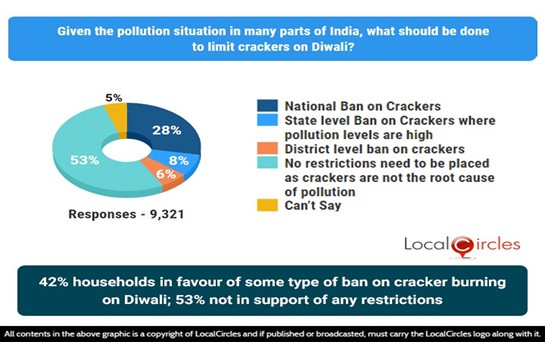 There are many health hazards cited by medical experts related to burning crackers as the air and noise pollution can affect people with disorders related to heart, respiratory and nervous system and crackers with toxic chemicals can increase the risk of cancer. The next question in the survey sought to understand the pulse of Indian households in favour of crackers ban on why they do not plan to burn crackers this Diwali. In response, 31% said “(1) it causes pollution”, 15% said they “(3) do not have anyone in the family who likes to burn crackers”, and 13% “(2) don’t want to spend on crackers”. Breaking down the poll, 4% voted for “1 & 2” reasons from the aforementioned options. 3% cited “1 & 3” reasons, while 25% said all “1, 2 & 3” reasons, and 9% said “other reasons”. On an aggregate basis, many households don’t want to burn crackers because they cause pollution and many consider it wasteful spending. This question in the survey received 9,257 responses.

At a time when households budgets are under squeeze because of high prices of fuel and essentials, 2 in 5 households calling it wasteful spending is no surprise. 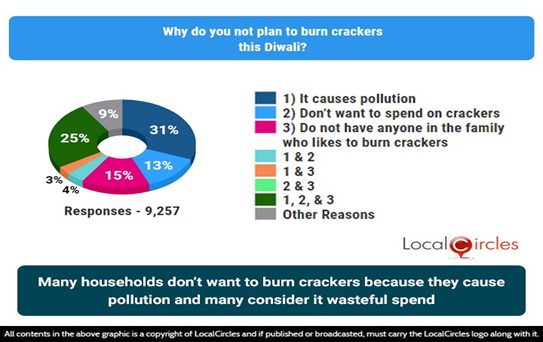 If reasons given by Indian households are evaluated in the order or priority, it was found that 63% do not want to burn crackers this Diwali because “it causes pollution”, 43% “do not have anyone in the family who likes to burn crackers”, and 42% “don’t want to spend on crackers”. 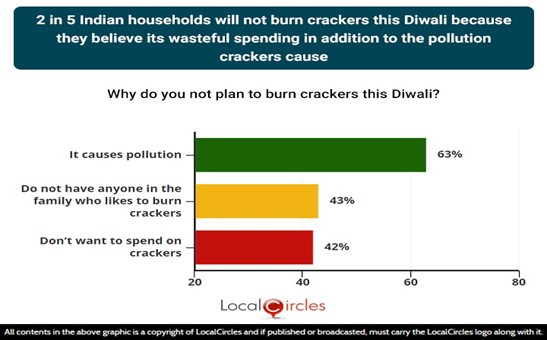 The findings of the survey indicate that 2 in 3 Indian households will not burn crackers this Diwali. Although 42% households are in favour of some type of ban on cracker burning on Diwali, 53% are not in support of any restrictions as they maintain that bursting crackers on Diwali day is not the primary contributor of pollution in India. On the other hand, almost 2 in 5 Indian households don’t want to burn crackers because they cause pollution and consider it a wasteful spend.

In the community discussions, many citizens have indicated that India must work in mission mode to address stubble burning by farmers in North Indian states as that will be the biggest driver to improve the air quality. A set of people do believe that cracker burning worsens an already severe air quality situation and hence restrain must be observed on cracker burning during Diwali. People also stated that they expect that the state law and order machinery to ensure compliance to the cracker burning timings as many stated how in their area/city it continues through the Diwali night despite the permitted time ending at 10 or 11 pm.