53% Delhi NCR residents surveyed identify stubble burning by farmers in Punjab, Haryana and UP as the primary cause for toxic air

November 05, 2022, New Delhi: Residents of Delhi NCR woke up to a thick envelope of smog on Thursday as air quality in the national capital region dipped to the extreme end of the very poor quality. The air pollution levels which were already disturbing before Diwali have risen alarmingly over the last week as stubble burning post-harvest in Punjab, Haryana and Uttar Pradesh increases. The Air Quality Index (AQI) in the national capital region in the morning of November 3rd ranged from 500-800 in different parts of Delhi NCR.

The fires data shows higher levels of farm fires between Sep 15-Oct 31 in Punjab in 2022 as compared to 2021. In 2021 the total farm fires were reported at 13,269 while they were 16,004 this year and ground reports indicate further pick up in farm fires in the last 3 days. While GRAP 3 has kicked in banning all construction activities, some leaders have continued to cite reasons beyond the farm fires as the drivers for toxic air of Delhi NCR. Leaders from Delhi Government have also discussed Odd-Even vehicle scheme in their media interactions which is supposed to kick in if air quality reaches the severe plus zone which it did this morning. While citizens are struggling to breathe, a political blame game is taking place between Delhi and Central Government.

To understand what the perception of citizens is on the primary cause of high levels of pollution in Delhi NCR, LocalCircles reached out to residents of Delhi, Ghaziabad, Noida, Faridabad and Gurugram. Over 20,000 responses were received in the survey in which 61% respondents were men while 39% respondents were women. It also asked citizens about introduction of Odd-Even vehicle program and whether they support or reject the idea. Many citizens in the past years, when the program was implemented had raised concerns about exclusions and though many believe it may help, they feel the benefit is not worth the inconvenience it causes to citizens.

53% Delhi NCR residents surveyed identify stubble burning by farmers in Punjab, Haryana and UP as the primary cause for toxic air

To gauge the perception of Delhi NCR residents on the primary cause of toxic air, the survey asked, “What according to you is the primary reason for bad air quality during October to December in Delhi NCR?”. In response, majority of the 10,037 respondents to the query identified stubble burning by farmers in adjoining states as the root cause. The data breakup shows 53% of respondents identify “stubble burning by farmers in Punjab, Haryana and UP”; a much smaller percentage or 13% believe the primary cause is “motor vehicle emissions”; 7% blame it on “garbage burning in the city”; 7% on ‘industrial emissions”; 7% on “construction activity”; while 13% have no opinion. 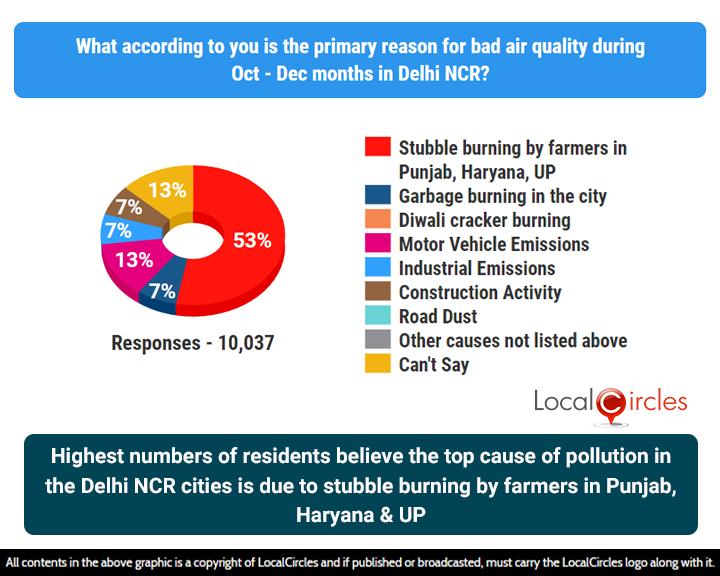 The next survey question focused on reducing vehicular emissions via the Odd-Even vehicle scheme that has been implemented in the past by the Delhi Government. It asked, “Do you support introduction of odd-even vehicle scheme in Delhi NCR as a solution to reduce vehicles on the road and as a result the air pollution?” In response, majority of 10,547 respondents to this query stated they do not support it. The data breakup shows 56% of respondents do not support it while 38% are willing to support this step to reduce pollution and 6% have no clear opinion. As against last year there is only a minor change in the sentiments to the Delhi NCR to the Odd-Even vehicle program. As against 35% who had supported such a move in 2021 the percentage has risen to 38% while those opposed to it has dipped from 57% to 56% this year. 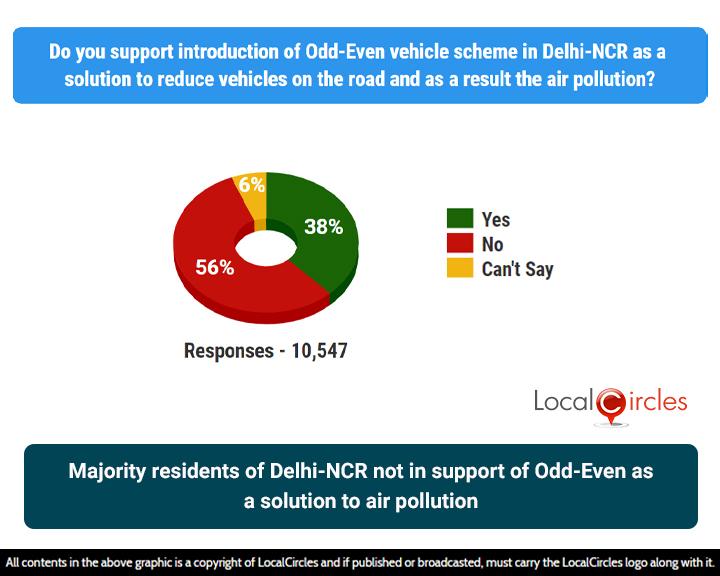 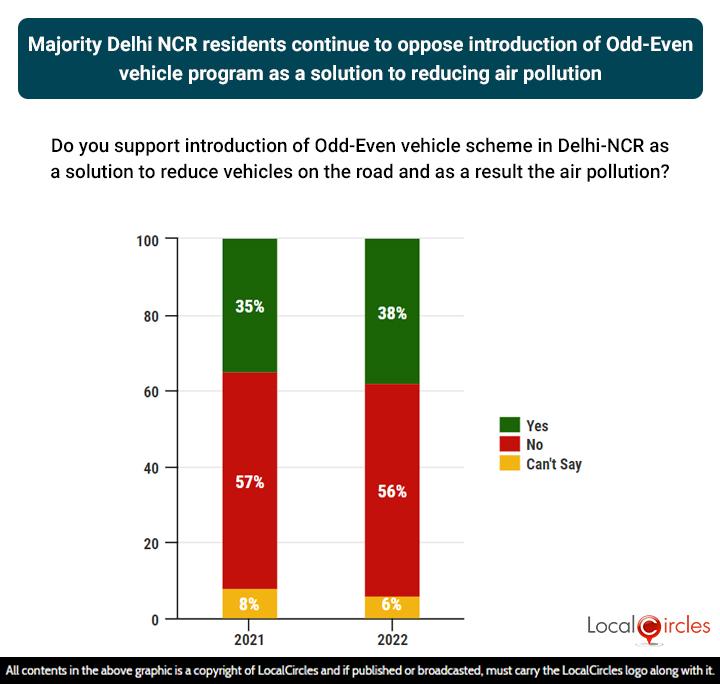 In summary, it is safe to say that majority of the Delhi NCR residents identify stubble burning in neighbouring states as the primary cause of rising levels of air pollution. A LocalCircles survey done in June this year had revealed that one in three Delhi NCR residents were banking on AAP governments in Delhi and Punjab to work together on this key recurring problem. The same was escalated to the Delhi Government for action. Many residents of Delhi NCR are surprised that despite the same political party leading the Government in both Delhi and Punjab, the farm fires this year are higher than last year and yet no action has taken place since June this year. Be it providing power to farmers on a timely basis for timely sowing or making more seeders available at the panchayat level or initiating a stubble burning pick up service, not much has been done. While Uttar Pradesh and Haryana have shown some progress, similar solutions also need to be implemented in these states. Residents of Delhi NCR though will have to unfortunately put up with toxic air in the coming weeks just hoping that the administrators will take some lesson and begin work now for Oct-Dec 2023.