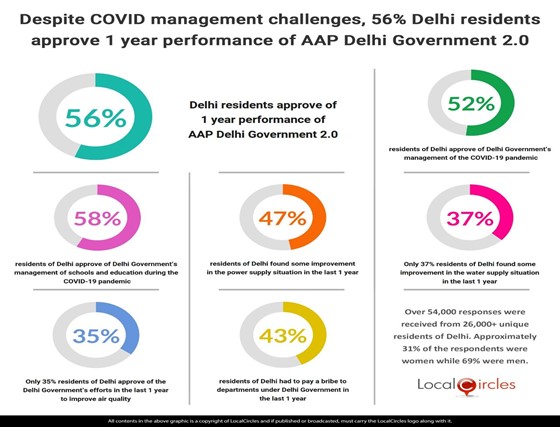 February 16, 2021, New Delhi: The COVID-19 outbreak and subsequent pandemic followed by lockdowns have tested the pulse of every nation from around the world. Likewise, India went into a country-wide lockdown from March 25th, 2020, aimed to flatten the curve. Everything came into standstill back then as sectors pulled down their shutters, and eventually, the economy dropped to the ground. The majority of citizens lost their job, forcing many to rush back to their home. In reality, the outbreak caused citizens a level of psychological damage, and some are yet to recover from the endurance faced during the pandemic. Delhi being the national capital and the top hub for commerce, travel connectivity and healthcare experienced enormous pressure as migrant labour headed back home during the pandemic and as many from states like Uttar Pradesh and Bihar flocked to Delhi to get their critical Covid treatment done.

Every year on the anniversary of the Delhi Government’s coming to power, LocalCircles is the only platform that goes back to the citizens of Delhi asking them to rate the Government’s performance. This allows both the broader citizenry and the Government to understand where things stand and what needs to be worked upon. As Arvind Kejriwal’s AAP Government got re-elected again in February 2020. February 16, 2021 marks the 1-year completion of his Government. This year’s survey “1 year of AAP Delhi Government 2.0” received 54,000+ responses from people residing across all 11 districts of Delhi.

The Government of Delhi was quite vocal to extend lockdown during the early phases of the outbreak as COVID-19 cases were surging at a record high. Only from the second week of June 2020, it allowed malls, restaurants and religious places to reopen, while declaring containment areas in the city as red zones instead of the whole district. It allowed Delhi Metro to resume its service from September as well as gyms and yoga centres. As relaxations were eased and inter-state travel opened its corridor, even migrant workers started to come back to Delhi in hopes to restart work.

To better understand how Delhi residents would rate the AAP Government’s management of lockdown and unlocking during the COVID-19 pandemic, 15% said it was “excellent”, 13% said “very good”, 10% said “good”, and 14% said “average”. Per aggregate responses indicated that 52% of citizens approve of the Delhi Government’s management of lockdown and unlock during the pandemic. However, there were also 17% of citizens in the poll who said the Delhi Government’s performance was “poor”, 29% said “very poor”, while 2% couldn’t say. The question in the poll received 6,618 responses from Delhi residents. 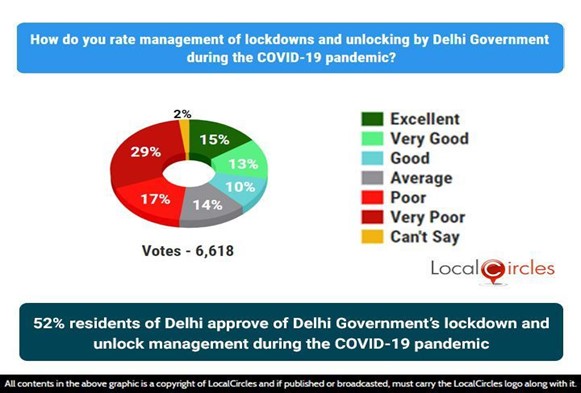 There are currently 94 centres (29 Government-owned, and 65 privately owned) in Delhi that are collecting swab samples for RT-PCR test for COVID-19. The Delhi Government has made Covid-19 testing free of charge at government-owned hospitals, while the same test at private centres cost INR 2,400. In order to augment the COVID testing drive, it initiated swab testing at all Aam Aadmi Mohalla Clinics, and also launched awareness campaigns at many levels.

To understand citizens’ perception of how the Delhi Government handled COVID-19 testing and reporting, 17% said it was “excellent”, 8% said “very good”, 12% said “good”, and 15% said “average”. The survey result indicated that 52% of residents of Delhi approve of their State Government’s management of COVID-19 testing and reporting. Further breaking down the poll, 14% said “poor”, 31% said “very poor”, while 3% couldn’t say. 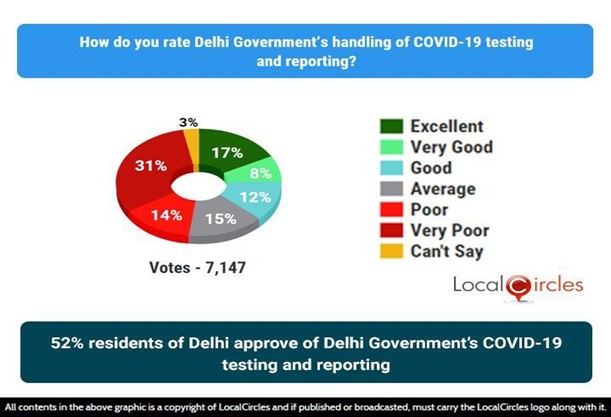 Delhi was amongst the worst states hit by COVID-19, causing an increasing burden to provide ICU beds to patients whose situation was getting aggravated due to the infection. Though the app to find beds launched by the Delhi Government had its share of issues, it did help to some degree as people could question the hospital they were at and that helped reduce hospital discretion, corruption and favouritism. The Government also got the private hospitals to allocate more beds to Covid-19 as cases increased in Delhi.

To understand how Delhi residents would rate AAP Government’s management of COVID-19 hospital beds, 15% said it was “excellent”, 13% said “very good”, 12% said “good”, and another 12% said “average”. The poll result indicated that 52% residents of Delhi approve of Delhi Government’s handling of COVID-19 hospital beds management. There were also 13% who rated the performance as “poor”, 33% said “very poor”, and 2% couldn’t say. 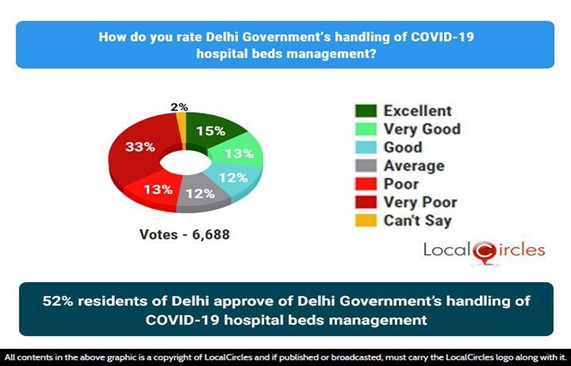 Schools across India were the first to shut down due to COVID-19 outbreak, and probably the last to reopen. During the pandemic, most schools in urban districts were able to provide online education and assignments to students, delivering classes through video conferencing. Though there were teething issues early on due to connectivity issues or lack of enough devices in many homes, things settled quite well by June 2020. With the inoculation of COVID-19 vaccines that started on January 16th, 2021, and declining caseloads has prompted the Delhi Government to allow students from classes 9 to 12 to attend school, with precautionary measures. 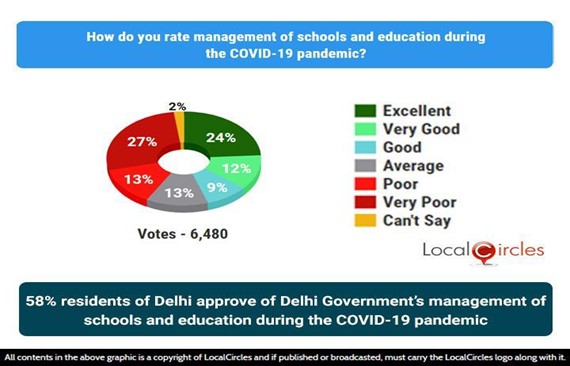 Corruption is often obligatory, demanding suborn in the form of cut-money or illegal commission. Even if one plays by the rules, bribery often becomes a part of the chain to get the work done. Though the year 2020 has mostly been about COVID-19, as the sectors reopened so has corruption, although there have been many developments to unearth irregularities flagged against officials of the State at various levels. It should be noted that Municipal Corporations and Delhi Police doesn’t fall under the jurisdiction of AAP Delhi Government. Water, Transport, Labour are some areas that do fall under Delhi Government and instances of corruption have been experienced by people. For example, Delhi Jal Board staff has been reported to turn a blind eye to societies who are using motor pumps to extract groundwater in the southwestern suburb of Dwarka in exchange for a set bribe.

To the question that asked Delhi residents how corruption to get work done has been under the Delhi Government in the last 1 year, excluding ones in Municipal Corporation and Police officials, 31% said they “had to pay bribes several times” and 12% “had to pay bribes once or twice” despite doing everything by the rules. The majority of 38% of Delhi residents said they “did not pay any bribes and got work done”, while 19% couldn’t say. Aggregate responses indicated that 43% of Delhi residents had to pay a bribe to departments under Delhi Government in the last 1 year. 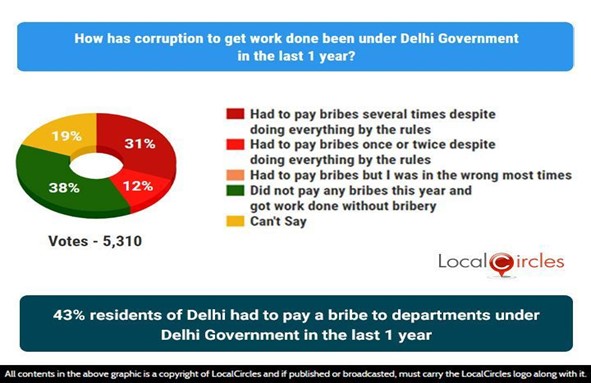 Chief Minister Arvind Kejriwal-led Aam Aadmi Party has been providing free power up to 200 units every month for households, a 50% subsidy on the monthly power consumption of up to 400 units, since 2015 – the move which is widely appreciated by Delhi residents. Recently the electricity regulator directed electricity distribution companies to reduce their fixed charges by half for unutilized capacity for April and May 2020 at a reduced rate of INR 125/kVA per month, as against the existing rate of INR 250/kVA per month. The move is expected to provide major relief to Delhi’s industrial and commercial consumers hit hard by the coronavirus pandemic. The AAP Delhi Government maintains that 38 lakh households got zero power bills in the last billing cycle.

Now that the power demand of Delhi is fast catching up than pre-COVID levels as an increasing number of economic activities have now resumed. The survey tried to understand how citizens rated the improvement in power supply in Delhi in the last 1 year. 31% said that there has been “significant improvement”, while 16% said “some improvement”. On the other hand, there were 25% of Delhi residents who said there has been “no improvement”, while 20% said that it has “gotten worse”, while 8% couldn’t say. Overall, the results indicate that 47% of residents of Delhi found some improvement in the power supply situation in the last 1 year. 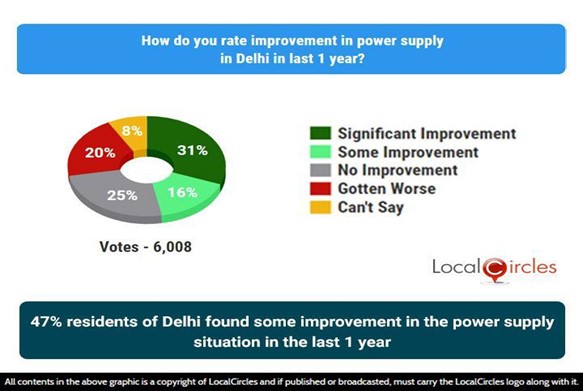 The AAP Delhi Government maintains that 14 lakh domestic consumers received zero bills for water supply in the last billing cycle. During the lockdown, however, lakhs of Delhi residents were reeling under acute water crisis, especially in South Delhi, as the demand-supply gap spiraled. As many projects, including those planned to connect areas with piped networks were stalled, the frequency of water supply by tankers drastically came down. In a bid to provide relief to residents, the Delhi Government in September 2020 offered a one-time waiver of water bill arrears and late payment surcharge till December 31 as part of a scheme it launched in August 2019. 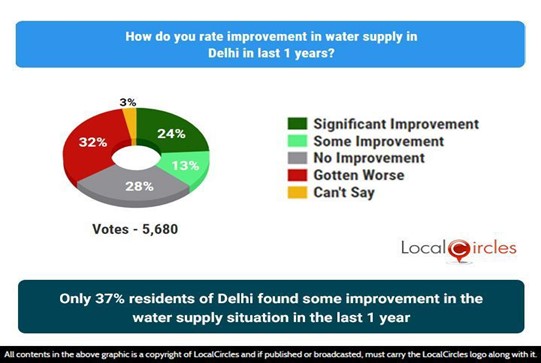 Every year, air quality in Delhi starts to deteriorate even before Diwali. AQI levels in 2020 again touched levels of 900-1000 for several days though due to COVID-19 and lower number of vehicles on road, the number of days was lower than previous years. Delhi continues to be in the top 5 most polluted cities of the world. Many Delhi residents who experienced a severe case of COVID during the months of October-November had a difficult time as the high AQI worsened their condition. While stubble burning in neighboring states, one of the leading causes of pollution in Delhi and NCR wasn’t addressed through coordination with those State Governments, the cracker ban was something that the majority of the residents adhered to. The sale of crackers was banned officially and except Diwali night there were hardly any crackers that could be heard in Delhi as compared to the previous years. 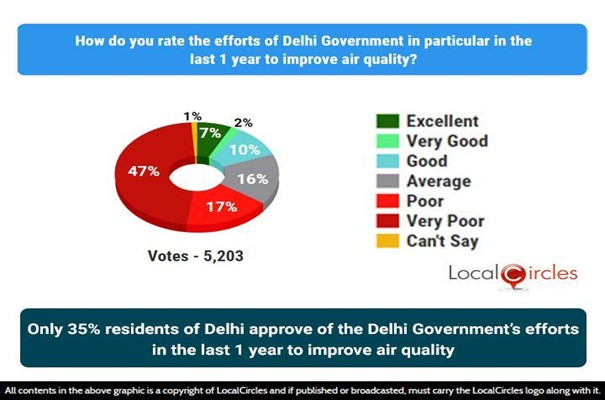 The final question asked residents of Delhi, “Overall, how do you rate the last 1 year performance of Delhi Government, considering all areas alike COVID-19 or health management, water and power supplies, along with anti-corruption, air quality?” Notably, 56% of Delhi residents approve of the 1-year performance of APP Delhi Government 2.0. Of which, 12% said the performance was “excellent”, 12% said “very good”, 16% said “good”, and another 16% said “average”. There were also 14% who said “poor”, 26% said “very poor”, while 4% couldn’t say.

When compared to last 4 years of survey results, 36% of Delhi residents in 2018 approved of AAP’s Delhi Government’s performance, which saw a decline by 3% to 35% in 2019. It, however, saw a meteoric rise to 68% of Delhi residents giving a thumbs-up to AAP’s Delhi Government’s overall performance. Some of it was due to the fact that people appreciated the good governance work in healthcare, school education, and other areas and wanted the Government to be re-elected in the 2020 elections. Although the year 2020 for Delhi AAP Government 2.0 has largely been about managing the COVID-19 situation in the State and the Government has done reasonably well, it has received the 56% approval rating. Assuming Delhi doesn’t experience another Covid wave, Arvind Kejriwal and his Government must now focus on taking what they have done in school education and health care to all other departments of their Government. Maximizing vaccination, boosting the Delhi economy, and ensuring a livelihood for every Delhi household will be the most immediate to dos. 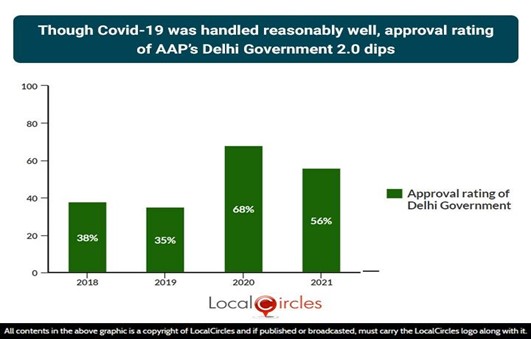