February 11, 2020, New Delhi: With the results of Delhi elections 2020 now out and the Aam Aadmi Party registering a win on 62 of the 70 seats, it has become clear that the residents of Delhi have voted on the basis of local governance and services delivery focussed approach of the Arvind Kejriwal led AAP Government. Residents of Delhi have reposed faith in the AAP leadership with over 53.5% of the votes going in favour of the Aam Aadmi Party. The election results prove that Delhi is now an aspirational society and what matters to people most is the quality of life and basic amenities like water, power, schools and healthcare.

In the month preceding the Delhi elections, LocalCircles had conducted a detailed survey in Delhi and asked Delhiites what they felt about the performance of the AAP led Government in the last 5 years. The large 11-poll survey had received more than 110,000 responses from citizens living in various parts of Delhi. 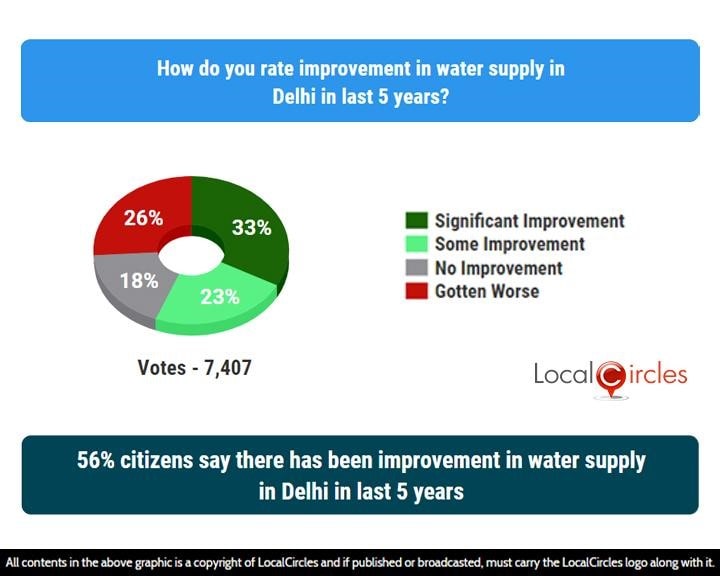 The Delhi Government has been proud of the work they have done in the healthcare sector and had allocated 14% of its total budget 2019-20 to it, compared to the 5% average of other states. Hospitals have been upgraded and other initiatives like mohalla clinics, Government bearing the expenses of emergency accident victims when taken to private hospitals, etc. have been appreciated by the residents. 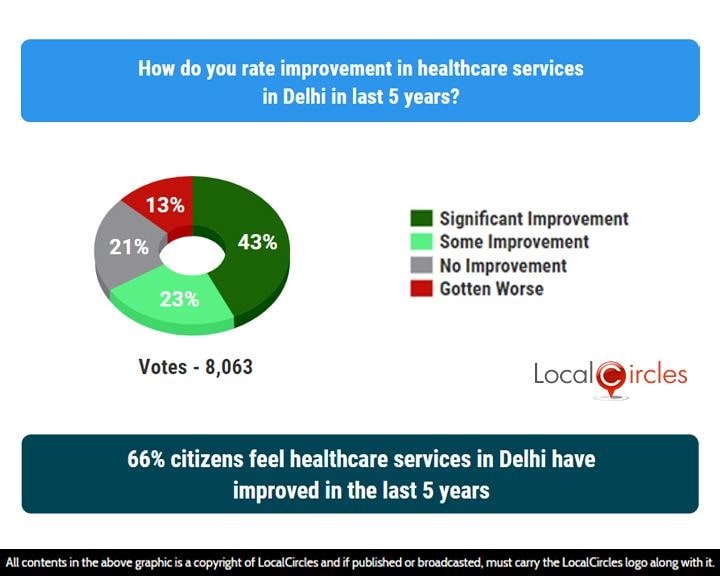 Improvement in power supply and lower bills emerged as areas that have made people happy, with 51% calling the improvement in the last 5 years as significant and 29% saying that there has been some improvement. 14% said there has been no improvement while 6% said the power situation has become worse. Citizens were asked to vote considering key parameters as availability, affordability and customer service. 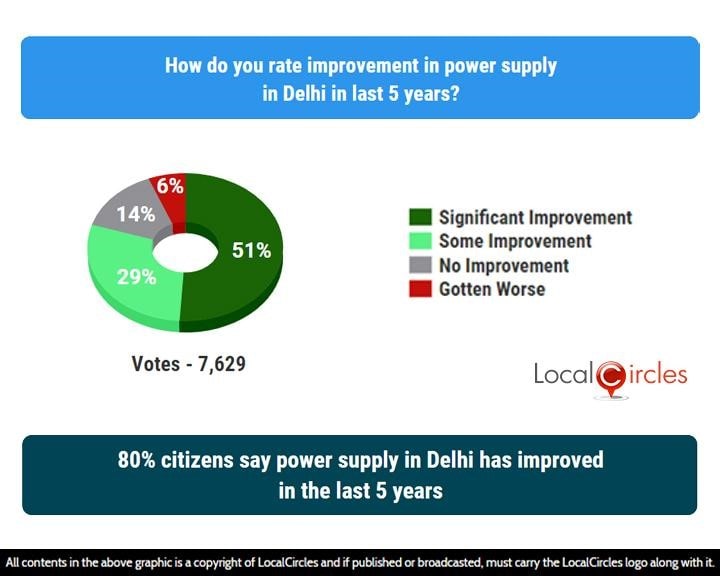 The Arvind Kejriwal led Government had earmarked Rs. 15,133 crores to education in the Budget 2019-20 which was nearly a quarter of its total budget, much higher than the 16% average by other states. Considering the key parameters as availability, affordability and quality, it emerged as one of the big wins for the Delhi Government with 58% Delhiites in the 5-year performance evaluation survey saying there has been significant improvement in school education in Delhi in the last 5 years and 16% saying there has been some improvement. 20% had said there has been no improvement in this area while 6% had said the situation had worsened. 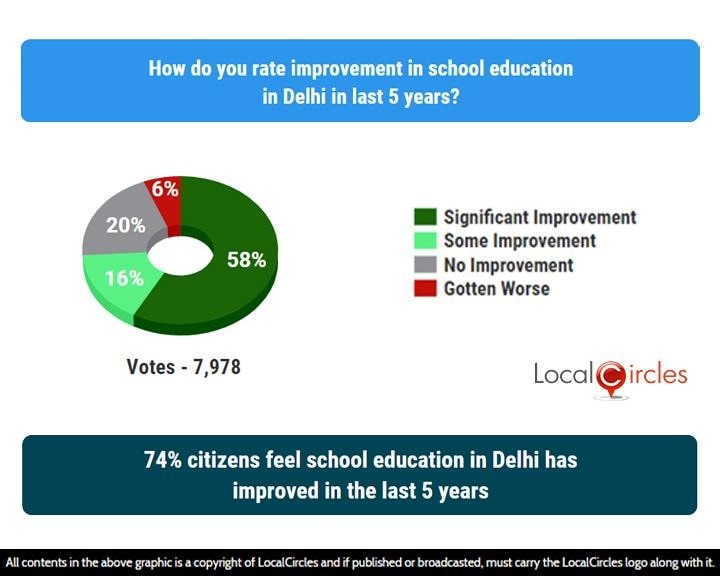 Launched in September 2018, the citizen services at the doorstep was a trademark initiative of the Delhi Government. Recently, the Government had announced that Delhiites will now be able to avail 100 services at their doorsteps, though the initiative which was a first of its kind in the world. Per the Government, the application success rate through this mode has been 91%, compared to 57% through the office window mode.

15% citizens in the survey had rated the initiative as excellent, 21% as good and 11% as average. 5% had said it works but it is difficult to get work done while 28% had said the initiative is completely ineffective. 20% were unsure. 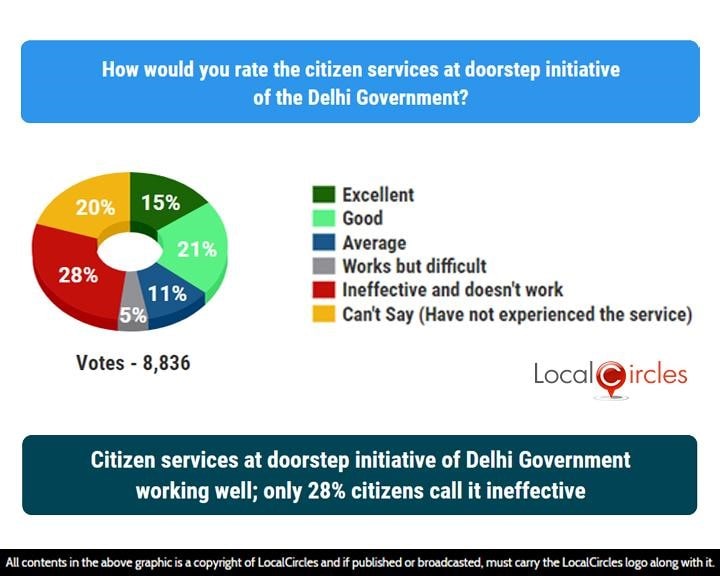 Next question asked citizens how do they rate Delhi Government’s efforts in the last 5 years to improve air quality. 15% rated it excellent, 16% good, 17% average and 51% rated the efforts as poor. 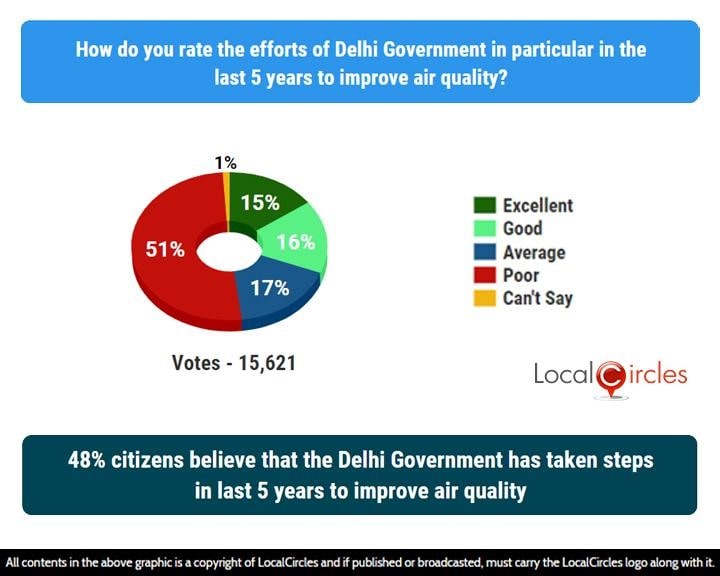 Dangerous level of air quality has been one of the most burning issues affecting residents of Delhi for the last 4 years. While there has been a minor improvement as compared to 2015-16 levels, PM 2.5 levels on November 3, 2019 crossed 1000 in many parts of Delhi. Citizens had appreciated the efforts of the Delhi Government to control the pollution in the city. Although the efforts have not translated into impactful results but measures like odd-even rule, hanging gardens on metro pillars, air purifiers at some bus stops etc. were liked by the citizens. The survey results were a testament to the fact where 31% citizens this year compared to 6% last year said Delhi Government had exceeded expectations in trying to control pollution in the city. 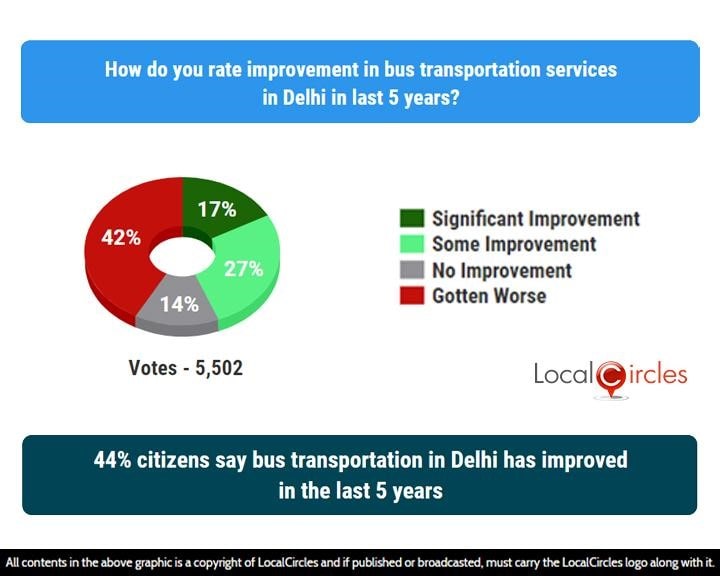 India’s World Bank Ease of Doing Business Ranking has improved over the last 3 years and the index looks at Delhi and Mumbai in its evaluation. Starting and operating a business has become easier in Delhi over the last 3 years. When residents of Delhi were asked how do they rate ease of doing business in Delhi in the last 5 years, 21% citizens said there has been a significant improvement, 12% said there has been some improvement, 41% said no improvement while 26% said the situation has gotten worse. 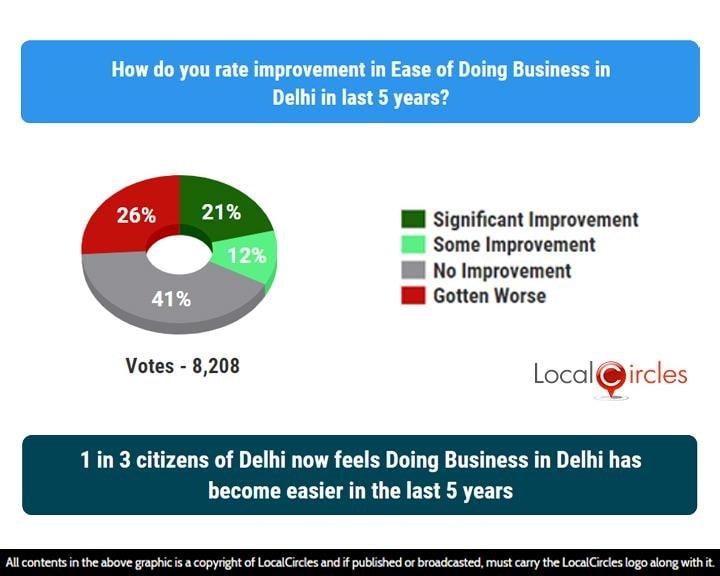 Delhi Chief Minister Arvind Kejriwal recently quoted a CAG report and said that their Government had increased expenditure on schools, hospitals, water and power, but was still able to maintain a revenue surplus in the last 5 years. He attributed this feat to no corruption and scams.

23% had also said there has been a significant reduction in corruption under the Delhi Government in the last 5 years. 23% had said the reduction has been minor while 14% had said corruption has instead increased. Delhiites were clearly told that Police and Municipal governance does not come under the jurisdiction of the Delhi Government and it should not be included in their evaluation for a fair assessment. 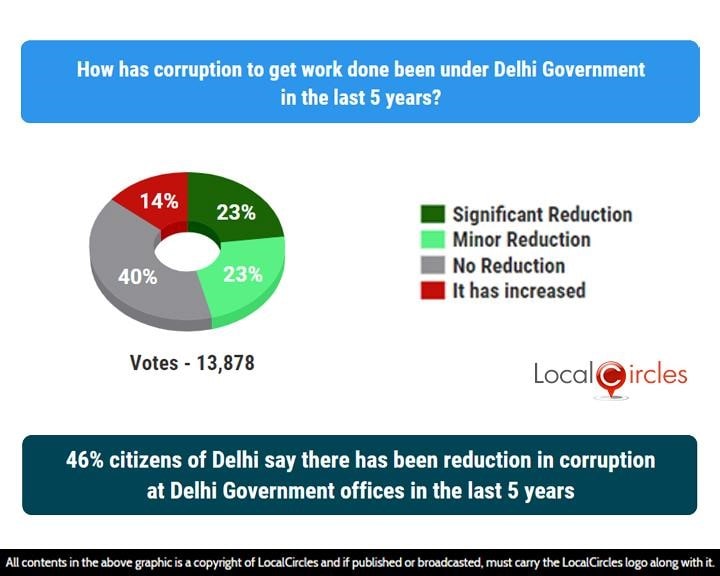 Aam Aadmi Party-led Delhi Government has been criticized time and again for spending too much on self-promotion. As per stats, their total spent on advertising in this 5-year tenure is all set to cross the Rs. 350 crores mark. When citizens were asked in the survey what they felt about it, 63% citizens had said that they believe Delhi Government spent excessively on advertising. 27% had said the expenditure was appropriate while 10% had said it was lower than what it should have been. 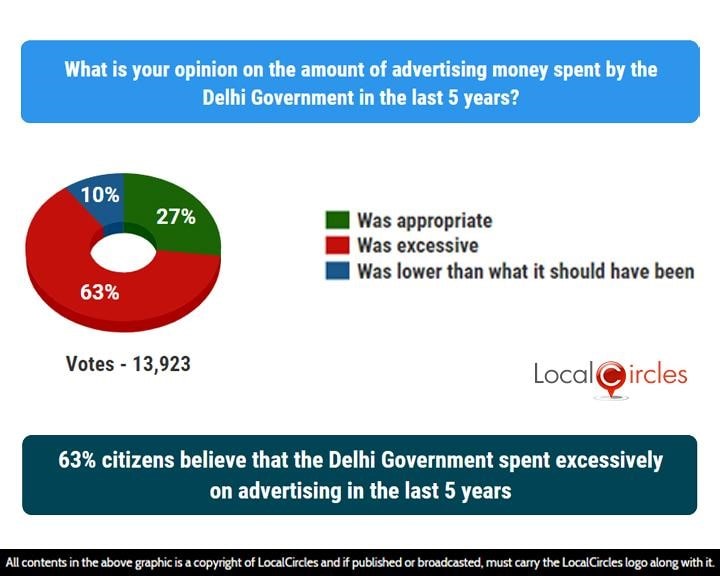 49% citizens give a thumbs up to 5 years performance of Delhi Government; 19% say it was average; 30% rate it poor 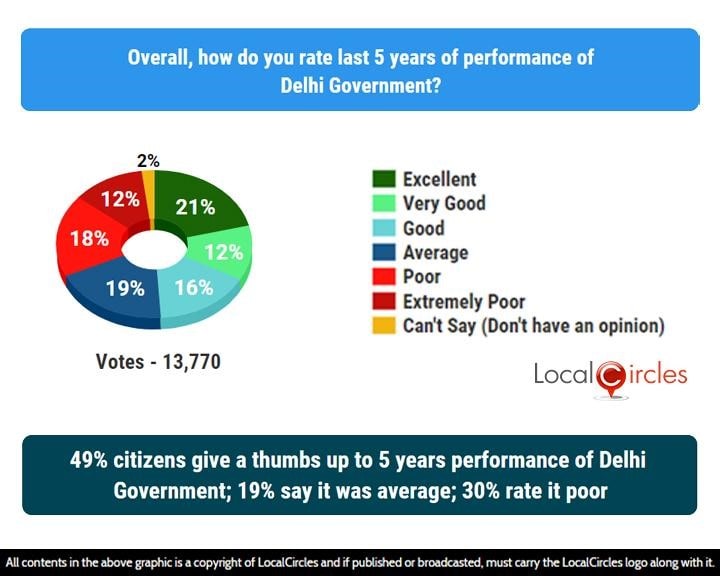 The Delhi Government had released its ‘report card’ and called itself the most honest Government in the country. The report card also mentioned the government’s achievements in the areas of women security, unauthorized colonies, public transport and areas. Arvind Kejriwal said that their Government had doubled the budget of healthcare, provided free electricity, water, WiFi services and free bus rides for women along with the doorstep delivery of services.

The Aam Aadmi Party swept the 2015 Delhi elections but later did not do well in the MCD polls. However, per citizen feedback, the Delhi Government took a lesson from the MCD results and started focusing much more on improving governance, the results of which started becoming visible in the last 24 months. The 62 seats won by AAP in Delhi election 2020 is a solid mandate considering the anti-incumbency factors. A clear focus on understanding and improving what matters to people has worked for the party. With majority of the people giving a thumbs-up to the work done in areas like water, power, transport, service delivery, health and education, the party now has the mandate to govern Delhi for the next 5 years. In various discussions on LocalCircles, the people of Delhi have already outlined key reforms that they would like to see in the next 5 years. Some of these include bringing in the Clinical Establishment Act, setting up a robust anti-corruption helpline and infrastructure and improving water quality levels, etc.