67% parents in favour of schools reopening within the next 60 days; 32% want reopening to be pushed to June/July

February 9, 2021, New Delhi: While states across India are currently at different points in their COVID-19 infection rates, in many states schools have already started to resume, especially for senior classes. Schools in India were the first to respond to the outbreak even before the Government of India announced the country-wide lockdown from March 24th 2020. Now that the COVID-19 case load has drastically reduced to 10% to 15% from its peak and is further declining, and the Government having inoculated over 6 million frontline healthcare workers with two vaccines—Covishield and Covaxin—students, mostly in classes 9 to 12 are back in school.

LocalCircles since April 2020 has been collecting responses from parents to understand issues with online classes to drive Government resolution during lockdown when children needed devices to finding our parents opinion on reopening of schools since August 2020. In the last LocalCircles survey conducted in late December, 69% parents were in favour of schools opening after April 2021. However, with daily case-loads continuing its decline in January, more parents have been demanding in the various circles on LocalCircles to re-open schools.

To gauge the collective opinion and to capture the change effectively, LocalCircles conducted another survey amongst parents. As the pandemic induced a sudden shift away from the classroom towards adopting online classes, the survey also sought to know how effective online classes have been for their children or grandchildren in comparison to in-person classes. The survey received more than 16,000 responses from parents located in 294 districts of India covering 24 states.

Depending upon the COVID-19 infection rates, states across the country have started to allow schools to resume classes, some for all grades and some for only senior grades. Last weekend, Uttar Pradesh announced that will reopen schools for classes 6-8 from Feb 10 and for classes 1-5 from March 1. 75% of India’s cases load is now in the two states of Kerala and Maharashtra.

In the following question, the survey has tried to understand parents’ opinion on when should schools consider reopening classes for students all grades. The survey asked, “Given that India’s daily COVID-19 case load is now 10-15% of its peak and continuing to decline, what is your position in regard to physical re-opening of schools for your children?” Of 8,524 responses, 14% said “schools are already open for my children or grandchildren and they are going”, while 17% said “schools are already open for my children but they are not going or doing online classes”. There were also 17% of parents who said that schools should consider opening schools from “Feb 15, 2021”, 20% want it to open from “March 1, 2021”, 13” said “April 1, 2021”, and 32% said “June or July 2021”, while 1% couldn’t say. The survey result indicated that 67% or the majority of parents are in favour of opening schools between now and the next 60 days.

Only 32% parents want school reopening to be pushed to June/July; majority in favour of opening them between now and next 60 days 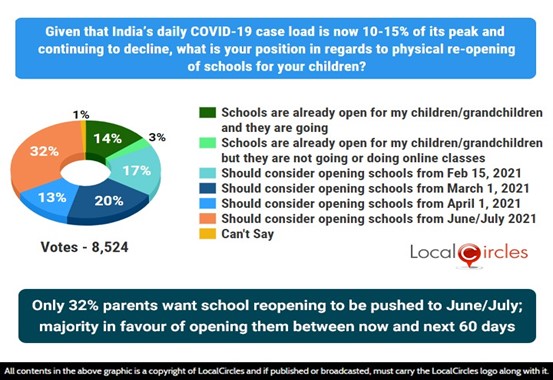 Only 19% parents rate online school classes as effective; 79% found them less effective than in person school

During the pandemic, most schools in urban districts of India were able to provide online education and assignments to students, delivering classes through video conferencing. Though there were teething issues early on due to connectivity issues or lack of enough devices in many homes, things settled quite well by June 2020. However, students from remote parts of the country badly missed this year’s session due to least or no infrastructure available for them to take online classes during the pandemic. This compelled many educational institutions to cancel their classes, reviews and examinations of the early terms.

The Ministry of Education, Government of India in June 2020 released guidelines for conducting online classes including duration of classes for each age group given the screen time concerns raised by parents. However, parents via LocalCircles raised several concerns about online classes ranging from children not keeping their videos on to checking out and chatting in parallel groups while classes were going on. Most schools did not have the infrastructure to keep the classes within a firewall and restricting parallel activity or making videos mandatory. In many parts of the country, due to limited wifi connections and poor mobile data connectivity indoors, students barely were able to do two way video classes and ended up with either an audio class only or only the teacher’s video visible to children but children not visible to the teacher.

Parents of younger children i.e. up to classes 5 commonly reported children checking out of the class or losing interest and teachers finding it difficult to keep the momentum.

Only 19% parents rate online school classes as effective; 79% found them less effective than in person school 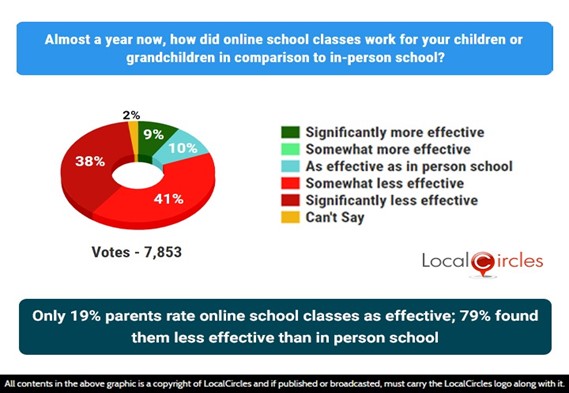 However, one thing that most parents seem to agree on is the fact that an alternate medium is now in place for emergencies like Covid that can also be utilized when there are other reasons for children to stay indoors. Pollution in North India is one such reason where schools in Delhi NCR stay shut during October and November anywhere from a few days to a week. The online mode which is now established, will help ensure that children don’t lose out on classes during such periods.

While the parents are excited to send children back to schools and carry on with their pre-Covid lifestyles, the risk of Covid is not completely gone. Many countries have reported a surge in cases after reopening schools in September 2020 only to have them shut in December again. The new strains B.1.1.7, B.1.351, P.1 have been reported to be each bringing their own set of challenges. The B.1.1.7 also known as the UK strain is 50% more transmissible, 30% more fatal and known to impact children. India has over 180 cases of B.1.1.7 itself though majority being passengers who traveled from the UK. The B.1.351 or the South African strain on the other hand has been reported to be evading the vaccine and neutralizing the antibodies from previous Covid infections. So, while it definitely makes sense to be reopening schools given the lower case loads, all norms of social distancing and hygiene would need to be followed while keeping a close watch on the case loads and the strain types. As and when, it does appear that there is rise in new cases, schools in those particular districts will have to be ready to go back in the online mode.

LocalCircles will share the findings of this survey with Central and State Government stakeholders so that feedback of parents can be considered as school reopening is considered.