From the daily COVID cases of around 450 during the end-February, Karnataka started to experience a sudden surge in the test positivity rate that reached its peak on May 5, with a 23,106 highest single-day spike, and took many lives every day. As cases were rising, there was utter chaos across the city’s hospitals facing acute shortages of oxygen cylinders & concentrators, ventilator beds, ICU beds, Covid management medicines, COVID test facilities, related supplies and equipment. At the time of great distress, while caregivers were running from pillar to post seeking aid for their dear ones infected with COVID, many also became the victim of black-marketing and scamming. The State Government had implemented a 50-day plan at the end-March. However, the awareness of Covid treatment and testing remained minimal through the year in rural areas, with around 50% occupancy in Covid Care Centres.

The Bharatiya Janata Party-led Karnataka Government under the leadership of Chief Minister B.S. Yediyurappa had to eventually impose full lockdown and restriction on public movement across the state from April 27 to contain and mitigate the spread. In the aftermath of 6 weeks of lockdown, the COVID-19 daily cases in the state came down steadily to just below 2,000 cases, along with a decline in the test positivity rate. While the related deaths remain high, there has been a steady rise in the recovery rate since end-May. There has also been an increase in the availability of ICU beds and ventilators in both private and public hospitals, and the vaccination drive is in full swing.

In the aftermath of all the developments in the 2 months of the 2nd wave of COVID-19, LocalCircles has gone back to the citizens of Karnataka asking them to rate their State Government’s performance on the overall handling of the outbreak. This allows both the broader citizenry and the Government to understand where things stand and what needs to be worked upon. This is vital to effectively handle the 3rd wave, which is likely to hit India in 6-8 weeks, as suggested by experts. Medical experts have warned about a new, more infectious Delta Plus variant and emphasised on the importance of continuing to wear a double mask, follow proper hygiene, and maintain social distance. The survey received 3,685 responses from Karnataka residents. 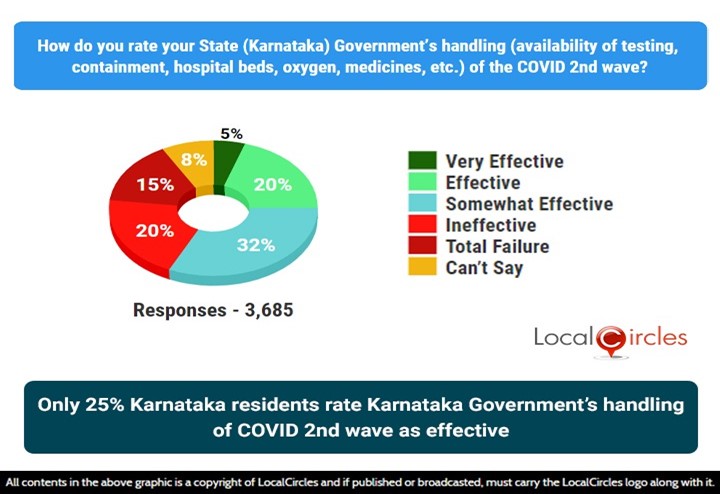 Overall, the residents of Karnataka after what they witnessed in the last 2-month period aren’t satisfied with the Karnataka Government’s handling of COVID 2nd wave in the state. This is evident with only 25% of Karnataka residents rating the State Government’s handling of COVID 2nd wave as effective as indicated by the LocalCircles’ survey. As Karnataka Government works on getting ready to handle the 3rd wave, it is critical that all aspects starting from testing, containment, hospital beds availability, readiness to handle child cases of COVID, doctors and medical staff, equipment like ventilators, BIPAP machines, concentrators, medicines and all things COVID are available in sufficient quantities. Also, it is critical that information flow is significantly improved and centralised such that citizens call a single number and based on their condition, location, preferences, budget are assigned the right hospital. Similarly, it is key that the patient information dissemination is streamlined, and hospitals can communicate with the family on the patient’s current health condition in a timely manner.

Overall, findings of the LocalCircles’ survey indicate that Karnataka ranked 13th amongst 17 states of India where 25% of residents have rated the Government of Karnataka’s handling of COVID 2nd wave as high. The ranking of Indian states in handling the 2nd wave of COVID-19 indicate that Tamil Nadu, Andhra Pradesh and Uttar Pradesh residents have rated their respective State Governments’ handling of COVID 2nd wave as high. Meanwhile, rating of Bihar and West Bengal were the lowest. 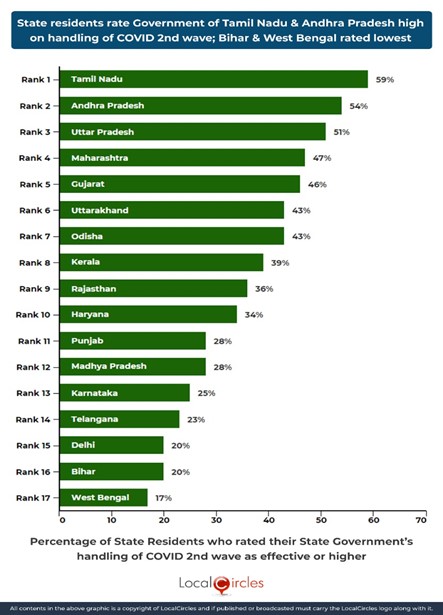 The survey received 3,685 responses from residents of Karnataka. The survey was conducted via LocalCircles platform and all participants were validated citizens who had to be registered with LocalCircles to participate in this survey.