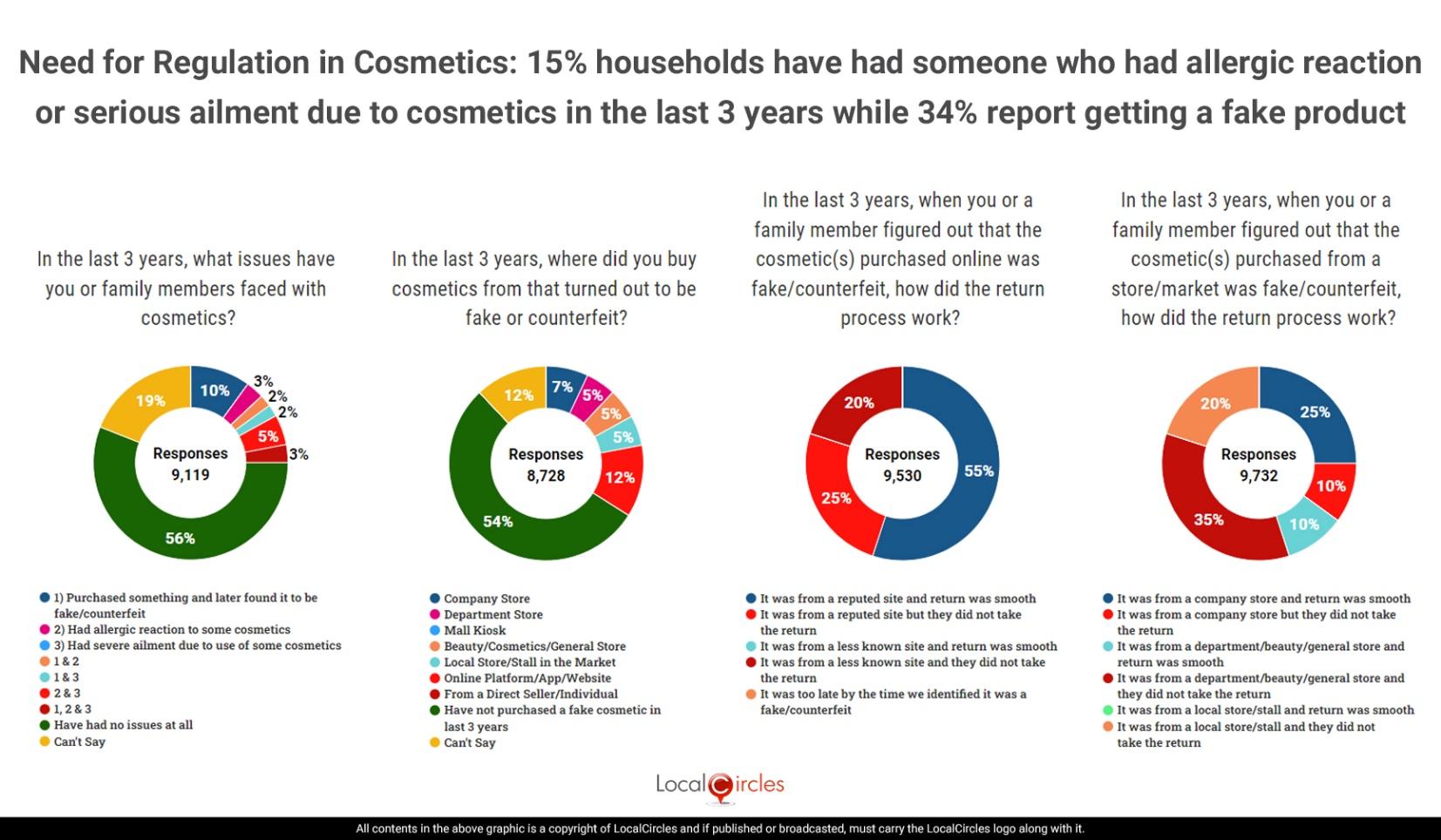 December 20, 2022, New Delhi: Unilever, the multinational consumer goods company, in October recalled several of its dry shampoo brands including Dove and Tresemme in the US after they were found to be contaminated with a cancerous chemical called benzene, according to information posted on the US Food and Drug Administration website. The withdrawn aerosols, reported to be contaminated with benzene that can cause cancer come from the propellants that are used to spray the products from the cans, manufactured before October 2021.

The same products via Hindustan Unilever also are sold in India, both in physical stores and online. This is not the first instance where Indian consumers are seen to be vulnerable to cosmetics that do not meet quality standards either due to the fault of the original manufacturer or due to fake or expired products continuing to be freely sold in the market. In one of the biggest raids, the Mumbai crime branch raided five godowns of beauty care products on September 27th and seized huge quantities of expired cosmetics even as the employees were altering the expiry date labels. In another raid in September, the Central Drugs Standard Control Organisation (CDSCO) seized illegal cosmetics estimated to be worth INR 4 crores. In February last year, Mumbai Police crime branch arrested five people for selling fake 'Lakme' cosmetic products of Hindustan Unilever Limited (HUL). Raids by crime branch unit on five stores located in Malad led to seizure of fake cosmetic products worth Rs 24 lakh. The fact that every few month raids are conducted in cities across the country, even at airports, yielding small and big hauls of cosmetics of poor quality - fake/expired/ hazardous cosmetics, is a grave issue as it poses great risk to the skin and health of users.

Indians like people globally love cosmetics whether for skincare, hair care, face care or personal care. They also like to undergo beauty treatment or therapy using varied products including herbal and natural produce. Eyeing the booming market, Reliance and Tatas are among major companies reportedly planning to start online retailing of multi-brand beauty and cosmetic products. Several ecommerce companies such as Nykaa and Myntra have already established their presence in the beauty and cosmetics segment. Other brands like Purplle, Sugar Cosmetics and Mama Earth also sell cosmetics online.

In 2020, India’s cosmetics industry was valued at about USD 20 billion fuelled by both online and offline sales, according to database company Statista. Unfortunately, due to lack of proper regulation, many of the cosmetic products, particularly those promising to make an individual fair and lovely, often contain ingredients that are not advised for use on humans.

The Centre for Science and Environment (CSE) in a report based on results after testing 32 fairness creams, 30 lipsticks, a few lip balms and a few anti-aging creams stated that more than 40% of fairness creams use mercury, which is banned for usage in fairness creams. Similarly, 60% of lipsticks tested had some or other heavy metals, including chromium (toxic) and nickel. The CSE report had stated that while it is possible to eliminate these toxins from lipsticks, the industry is not doing it nor is the government forcing them to adhere to the set norms. The think tank states that the current regulation in India on use of toxins in cosmetics is very poor. Its implementation is even poorer as the regulators are not checking the ingredients or the final products. The only cheering fact in the CSE report is that in 50% of the cosmetic samples tested no heavy metals or mercury was found.

With lots of concerns reported over a 36-month period on LocalCircles, the platform decided to conduct a pan-India survey to understand issues faced by Indian consumers in the last 3 years with the cosmetics they purchased from physical stores or online. The purpose is to generate awareness amongst users about the issues faced by others, understand counterfeiting and also sensitise the regulator. The survey received more than 37,000 responses from household consumers residing across 305 districts of India. Of these, 48% respondents were from tier 1 cities, 27% from tier 2 cities and towns and 25% respondents were from tier 3 and 4 town and rural districts. Gender wise, 61% respondents were men and 39% were women.

The first question in the survey asked respondents, “In the last 3 years, from where did you buy cosmetics that turned out to be fake or counterfeit?” In response, 7% said “company store”, 5% said “department store”, 5% said “beauty/cosmetics/general store”, another 5% said “local store/stall in the market”, and 12% said “online platform/app/ website”. 54% said they “had not purchased fake cosmetics in the last 3 years”, and 12% couldn’t say. On an aggregate basis, 34% of households had an incident where someone purchased cosmetics in the last 3 years that turned out to be fake or counterfeit. Of the 34%, 12% bought such cosmetics online while 22% bought them at a physical store or in the market. This question in the survey received 8,728 responses. 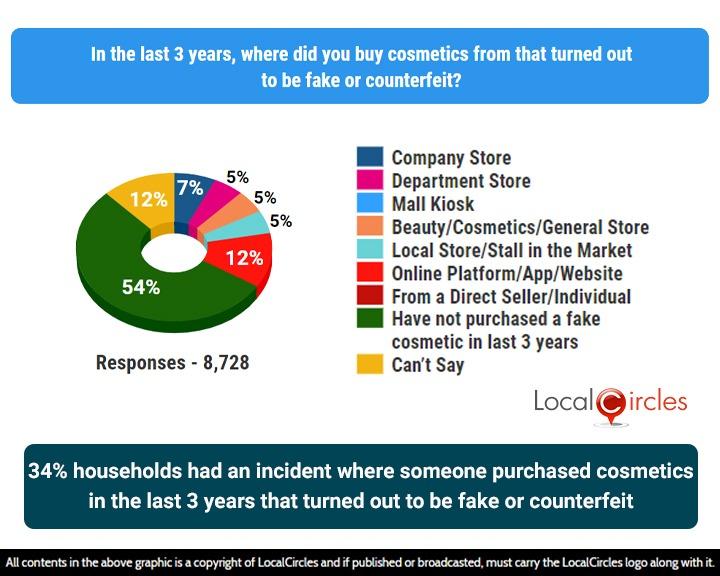 In India, the Drugs and Cosmetics Act, 1940, regulates the import, manufacture, distribution and sale of drugs and cosmetics. Industry experts argue that the present legislation is completely obsolete as it does not address issues related to online sales of medicines or cosmetics. As a result, there is rampant growth in the sale of illegal cosmetics.

On the basis of the recommendations of an 8-member panel headed by the Drug Control General of India to frame new laws for medicines, cosmetics and medical devices, the central government notified new cosmetic rules in 2020. The new rules mandate sharing all information about the manufacturer and the country where the product was manufactured, ingredients used, directions for safe use, among other details, to be placed in the label of cosmetics to enable consumers to make an informed choice. The government also decided to set up the first Central Cosmetic Laboratory and appoint inspectors across states.

As per the new rules, the expert panel will strive to keep up with changes in the pharmaceutical market, and monitor new retail avenues and regulatory demands that have emerged in recent years. Industry lobby says that the committee must have representatives from other stakeholders such as manufacturers, doctors, academia, scientists and consumers of patient bodies. Despite the forward movement by the government to regulate the cosmetics industry, very few instances of a crackdown on makers of spurious cosmetics have so far been reported.

The new rules clearly state ingredients that can or cannot be used in cosmetic products. Under the “Classification of Cosmetic Raw Materials and Adjuncts” issued by the Bureau of India Standards (BIS), the ingredients are classified into two categories: Generally Recognized As Safe (GRAS) and Generally Not Recognized As Safe (GNRAS). The GRAS class includes a list of dyes, colours and pigments allowed in cosmetics. The new BIS classification prohibits manufacture or import of cosmetics that contain dyes, colours and pigments that are not specified by it. In the case of other ingredients, the BIS usually considers them to be part of the GRAS class.

As per a report titled “The State of Counterfeiting in India 2021,” cosmetic products are among the most counterfeited products in India’s FMCG sector. These products contain lower quality or potentially harmful ingredients.

The next question in the survey asked respondents about the issues they or their family members faced with cosmetics in the last 3 years. Around 10% pointed to “product quality issues”, and 3% had “(2) allergic reactions to some cosmetics”. 2% had “(1) product quality issues” and “(3) severe ailment due to use of some cosmetics”, another 2% said they faced both “1 & 2” issues, 5% had “2 & 3” issues, and 3% had all “1, 2 & 3” issues. Overall 56% said “have had no issues at all”, while 19% couldn’t say. On an aggregate basis, 25% of households have had issues with cosmetics they purchased in the last 3 years, of which 15% faced an allergic reaction or severe ailment. 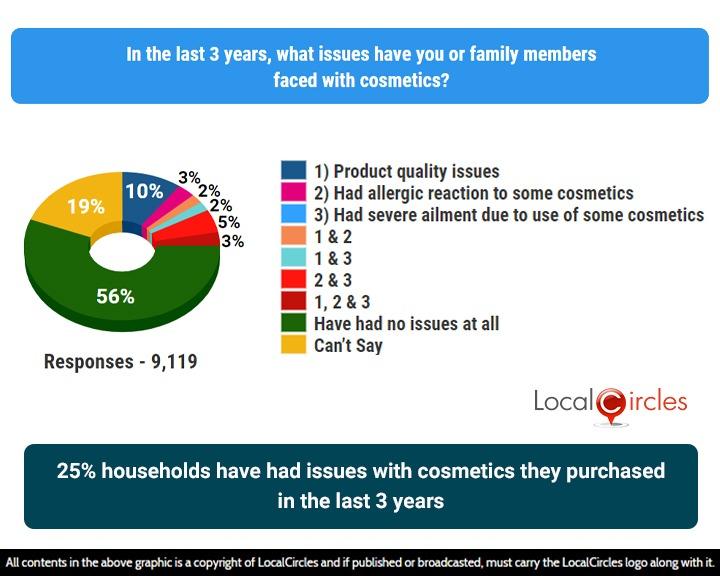 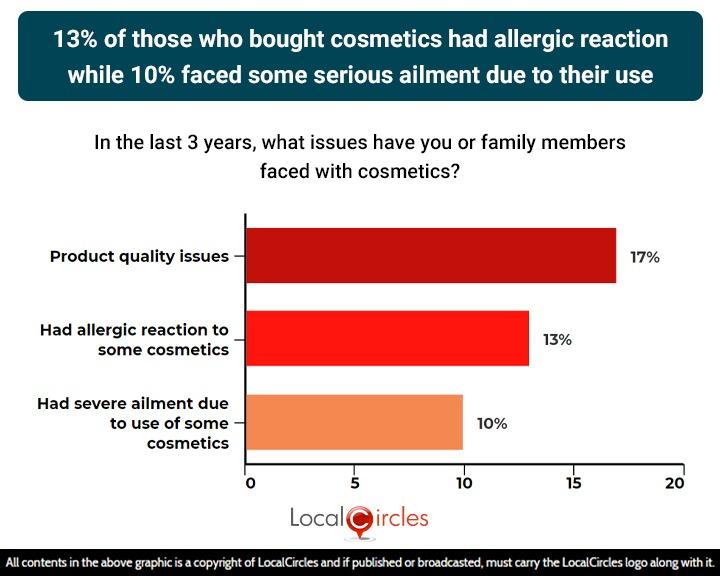 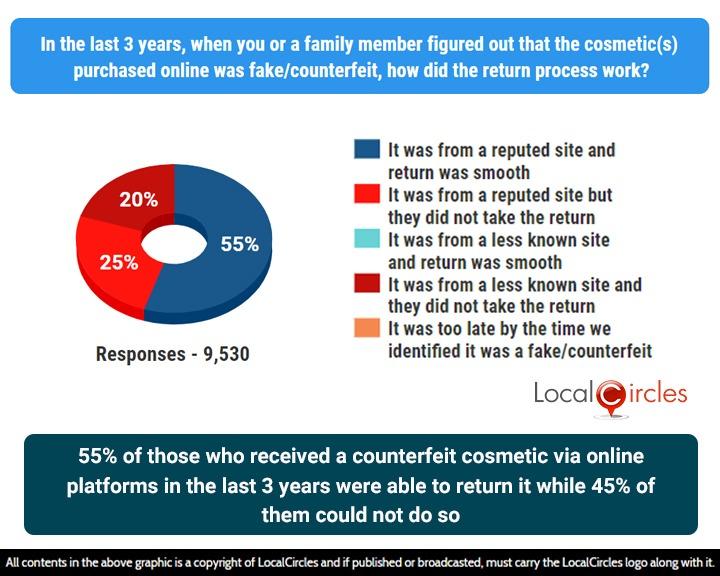 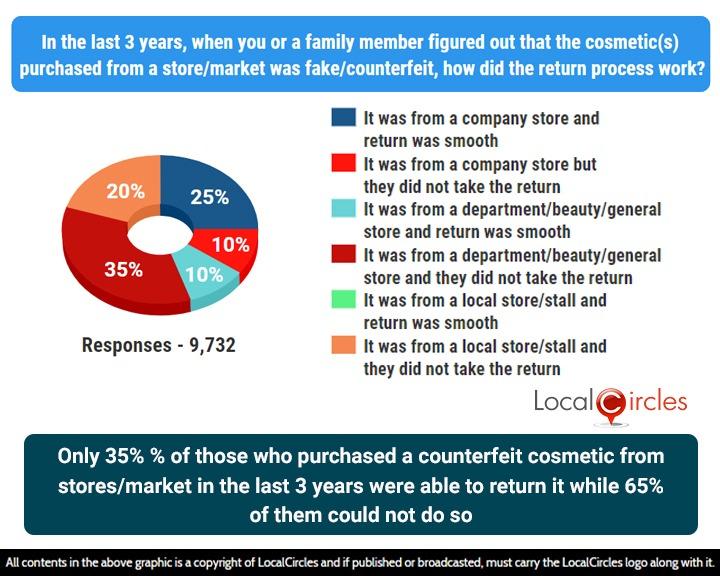 In summary, the findings indicate that 25% of Indian households surveyed have had issues with cosmetics they purchased in the last 3 years. 15% of them have had an allergic or severe reaction to the cosmetics they purchased. During the time, 34% of households purchased cosmetics that turned out to be fake or counterfeit. 55% of those who received a counterfeit cosmetic via online platforms were able to return it while 45% failed to do so. Similarly, only 35% of those who purchased a counterfeit cosmetic from stores/market in the last 3 years were able to return it while 65% of them could not do so.

The "Constitution of Committee for Framing of New Drugs, Cosmetics and Medical Devices Act" hopes to bring regulation and innovation. However, it is of utmost importance to have an inclusive framework that includes medical experts and consumer representatives to better understand the challenges faced and the long term health implications of using unsafe cosmetics.

LocalCircles will be sharing the findings of this survey with key stakeholders within the government to sensitise decision makers about some of the adverse experiences of cosmetic users in order to help improve the quality of cosmetics and how they are sold in order to protect the interests of the consumers.