For 2 in 3 Indian households, contactless home delivery with social distancing to be top criteria for their purchases in the next 3 months

June 8, 2021, New Delhi: India experienced a major COVID 2nd wave between April 1st and May 15th and the daily cases hit a peak of over 410,000. The new SARS-COV2 variant B.1.617.2. caused havoc in many parts of India with people struggling to secure hospital beds, medicines, oxygen and all related things. Most states declared lockdowns in early or mid-April in an attempt to contain COVID and finally after 3 weeks of strict lockdowns, the case loads started declining with India now reporting approximately 120,000 daily cases.

During the lockdown, most states only kept supplies of goods like vegetables, fruits, groceries, medicines, etc. open and stores and supplies of all other goods were shut. Consumers in most states that were under lockdown could not procure other items of need like books for children, fans and coolers, Work from Home Devices like mobile phones and laptops and related accessories. While the consumers faced inconvenience, a 50-60 day shutdown severely impacted MSMEs, retailers and traders who were already in a fragile state, trying to recover from the 2020 demand slowdown.

66% households believe that in the next 3 months, the top criteria for deciding their mode of buying will be contactless home delivery and adhering to social distancing norms

With the highly transmissible SARS-COV2 strain B.1.617.2 spreading rapidly during the 45-day period in April and May this year in India and many families and social networks getting impacted, many consumers just made a conscious choice to staying indoors independent of whether their state or district had imposed a lockdown.

This phenomenon was observed in not just large cities but even tier 1, 2 and 3 towns. To procure what they needed to run their household, they placed orders with ecommerce apps, local websites or sent a whatsapp to local stores for essentials. Many local administrations even issued a set of numbers of local stores to call for purchasing groceries via home deliveries.

As states and districts unlock, the first question in the survey attempted to understand if this trend or ordering things and taking home deliveries is here to stay. It asked citizens the top-most criteria for them when they decide how to buy what they need in the next 3 months. In response, the majority of 66% of households believe the top criteria for deciding their mode of buying will be contactless home delivery and adhering to social distancing norms. Breaking down the poll, there were 13% voting for “convenience”, 3% said “price”, 15% said “supporting small businesses”, 1% said “others”, while 2% couldn’t say. This question in the survey received 8,116 responses. 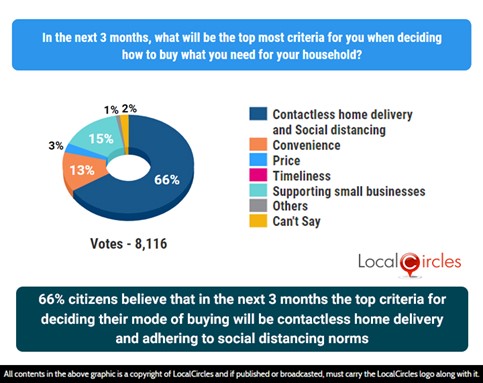 Given that many states and districts have been in lockdown mode, the next question in the survey attempted to understand the kind of products households have a need to purchase as the unlocking begins.

One of the top areas where LocalCircles had been receiving consumer posts and queries in the last 45-60 days has been the need to procure items related to children ranging from books and stationery to extra-curricular activities or hobbies to keep children engaged at home during this time. The next question asked respondents about the kinds of “must-have” products they need to procure for children and grandchildren in the next 3 months. In response, 8% said “(1) school books, stationery & equipment for online classes”, 5% said “(2) children apparel, footwear, raincoats, etc.”, and 7% said “(3) other children’s needs such as toys to keep children engaged at home, hobby, supplies, etc.”. Breaking down the poll, 8% voted for “1 & 2” products from the aforementioned options, 9% said “1 &3”, 14% said voted for all “1, 2 & 3” options. There were 49% who said “not applicable or undecided or do not need to procure any of the above”. The findings indicate that 51% of households have various items they need to purchase for children in the next 3 months. This question in the survey received 15,199 responses. 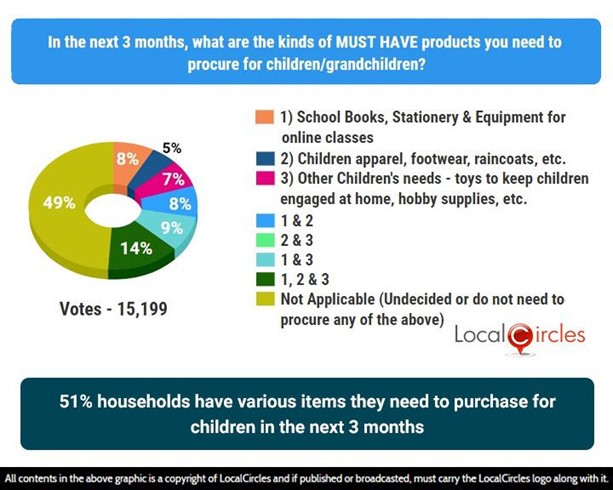 40% households will need to purchase school books, stationery & online class equipment for children in the next 3 months

Alternatively, if we are to separately look into the percentage of “must-have” products households think they need to procure for their children, 39% said “school books, stationery & equipment for online classes”, 30% said “other children’s needs such as toys to keep children engaged at home, hobby, supplies, etc.”, and 27% said “children apparel, footwear, raincoats, etc.”. This suggests that 40% of households believe they will need to purchase school books, stationery, and online class equipment for children in the next 3 months. Given that school sessions have just started in some states and will start in almost all states over the next 30 days, this is an immediate need and area of spending for 2 in 5 families. 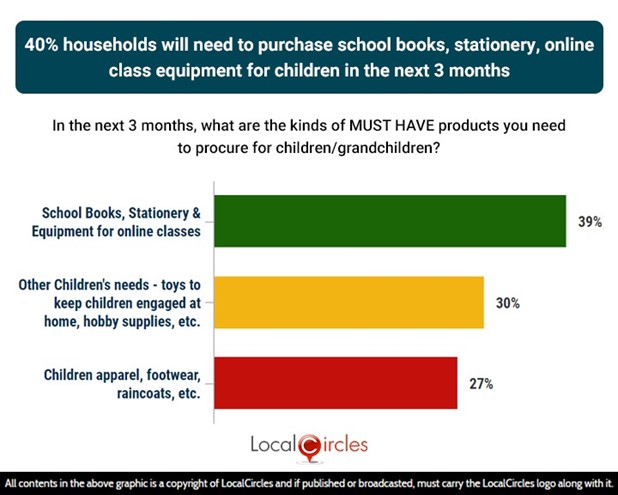 Just when many companies were in the process of transitioning back into a 100% employees back to office model, the COVID 2nd wave hit India taking most by surprise. A typical Indian middle class household now has most of their home space occupied where 1-2 adults are working from home and children are doing online classes, tuitions etc.

45% households have various items they need to purchase for their home, work in the next 3 months

The following question tried to understand the types of items, households have a need to purchase in the next 3 months. In response, 13% said “(1) equipment such as laptop & mobile phone for work from home or other activities”, 5% said “(2) air conditioners, coolers, fans, whitegoods, others”, and 6% said “(3) home appliances, bedding and furnishings”. Breaking down the poll, 5% said “1 & 2”, 1% said “2 & 3, 3% said “1 & 3”, and 12% voted for all “1, 2 & 3” options. The majority of 55% said “not applicable, or undecided or do not need to procure any of the above”. The findings indicate that 45% of households have various items they need to purchase for their home, or work from home in the next 3 months. This question in the survey received 8,956 responses. 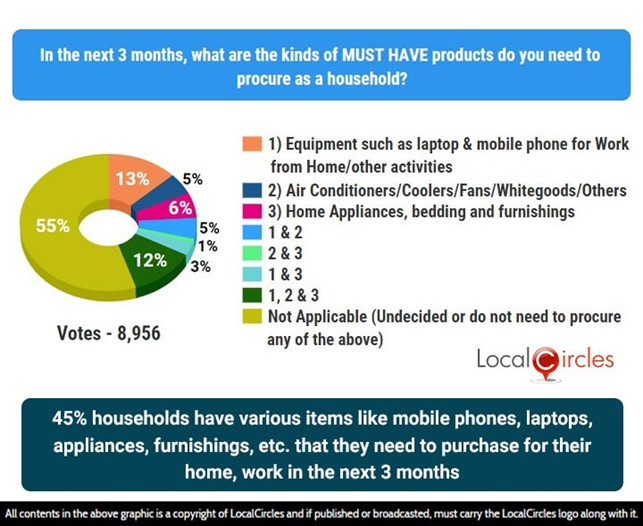 Alternatively, if we were to look out separately for the percentage of “must-have” products households are likely to procure in the next 3 months, 33% said “equipment such as laptop & mobile phone for work from home or other activities”, 23% said “air conditioners, coolers, fans, whitegoods, others”, and 22% said “home appliances, bedding and furnishings”. This means that 1 in 3 households will need to purchase a gadget, while 1 in 4 require whitegoods in the next 3 months. 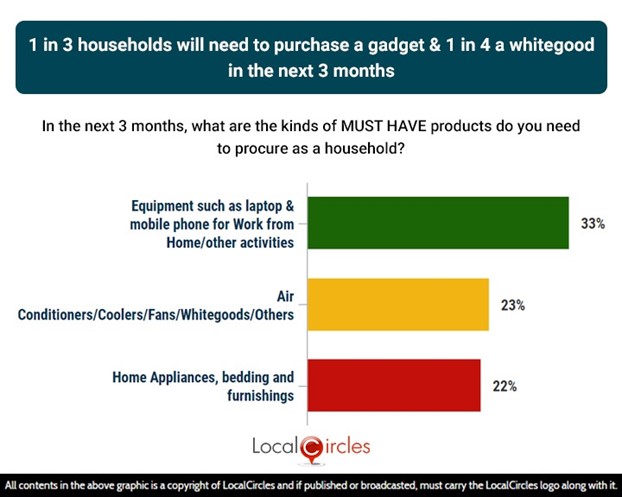 Given the nature of the B.1.617.2 SARS-COV2 strain prevalent in India, which per the Department of Science and Technology, Government of India is transmitting via droplets, aerosol or air transmission up to 30 feet as well as via surface transmission, work from home and spending more time at home will be a reality for 2021. Many consumers and households have realized the same and want to get set up such that they can function from home effectively. This is likely to drive up demand for home furnishings, appliances, electronic accessories, mobile phones, laptops, desktops, low-cost printers, routers, wi-fi extenders, video or web cameras etc.. Demand spike is also likely for whitegoods like air conditioners, coolers etc. as households create comfortable spaces to work or do online classes all day for the foreseeable future. As unlocking begins and retail stores, online retail supplies resume, they are likely to see a spike in orders in the above areas.

Most State Governments are currently in the process of unlocking while keeping a close eye on daily caseloads, testing, containment and vaccination. In some states opening of stores and markets has been permitted for a reduced number of hours and home deliveries have also been permitted, however in many others, restrictions are still in place. The next question attempted to understand from consumers how the unlocking should be done. It asked them “Now that cases in most states are declining, and Governments are considering unlocking in phases, what are the kind of services that must be opened immediately when unlocking in districts and your state begins. In response, 17% said “(1) home delivery of all goods”, 6% said “(2) physical retail stores and markets with normal functioning hours”, and 28% said “(3) physical retail stores and markets with reduced functioning hours”. There were also 10% of citizens who voted for 1 &2 and 38% voted for 1 &3 service from the aforementioned options that should be opened immediately. The result indicates that 2 in 3 citizens believe that once a district is unlocked, home delivery of all items and retail stores and market opening with reduced hours should be permitted. This question in the survey received 8,990 responses.

2 in 3 citizens believe once a district is unlocked, home delivery of all items and retail store and market opening with reduced hours should be permitted 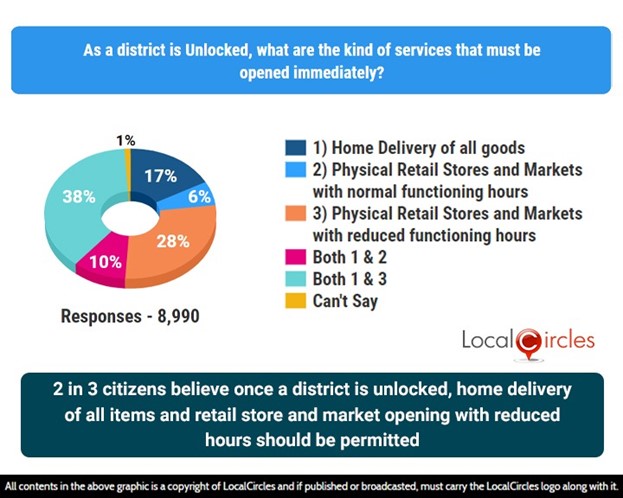 In addition to the above poll, LocalCircles also conducted a feedback exercise on the subject of unlocking of retail and local businesses and markets given that they have been shut for 45 days facing huge disruption. The key recommendation from consumers here was that State Governments and District Administrations as a first unlock step must consider opening stores only for Home Deliveries and if cases stay low, opening stores for consumer walk in with reduced working hours. According to consumers, if over a 2-week period, the daily case load continues to stay low or declining, full opening of retail stores and markets may be considered.

In summary, given what India has experienced in the last 60 days with the 2nd wave of COVID, the typical Indian household is fearful and concerned. During the last 60 days, many more households who had not used the home delivery model to procure items of need in 2020 adapted to it. Be it placing orders on ecommerce apps or local retailer website, whatsapp or a phone in to place the order, they have gotten used to getting things delivered to them. As unlocking begins across India, for 2 in 3 households, atleast for the next 3 months the criteria for which channel to procure things from is contactless delivery and sticking to social distancing norms. As stores are permitted to open and online platforms start accepting orders for all items, highest levels of demand is likely to be for children related products like books, stationery, online class equipment, Work From Home Gadgets like mobile phones, laptops, whitegoods, appliances, home furnishings, etc. These findings provide some hope for MSMEs and retailers operating in this sector as states and districts unlock and they get back to business.

LocalCircles will share the findings of this study with key stakeholders in Central Government and State Governments so as unlocking decisions are made, feedback from households and consumers can be considered.