November 14, 2022, New Delhi: Advertisements have been an important tool to promote products or services and reach as many consumers as possible. Actors and celebrities are often used by promoters in their advertisement campaigns on print, TV, digital and even social media platforms to lure consumers into buying their products and services. Often children are used in marketing campaigns to promote products, including packaged foods like ice-cream, chocolate, chips, juice, etc., to influence children who in turn then persuade their parents into making purchases guided by their choice. For atleast four decades, this has been a tried and tested promotional tool used by both Indian and multinational companies seeking to push sales of a variety of products right from fast moving consumer goods (FMCG) to foods and beverages.

In the case of packaged goods ranging from biscuits to soft drinks and chips to chocolates - there has been a significant rise in consumption of packaged foods among children, and it continues to have adverse effects on their health as it contains a high amount of sugar, salt and unhealthy fat ingredients. Child specialists hint that those children with habit of eating packaged foods develop obesity at an early age and even attention deficiency hyperactive disorder (ADHD). The World Obesity Federation predicts that over 27 million children in India may suffer with obesity by 2030.

Taking cognisance of the issue, the Central Consumer Protection Authority (CCPA) on June 9th, 2022, issued a guideline, "Prevention of Misleading Advertisements and Endorsements for Misleading Advertisements, 2022", stating that an advertisement that addresses or targets or uses children shall not condone, encourage, inspire or unreasonably emulate behaviour that could be dangerous for children. It also prohibits advertisers from exaggerating the features of goods, product or service in such manner as to lead children to have unrealistic expectations of such goods, product or service. It also says that an advertisement for junk foods, including chips, carbonated beverages and such other snacks and drinks shall not be advertised during a program meant for children or on a channel meant exclusively for children. That said, there are a few responsible advertisers emerging who consider that children should not be as part of their marketing and advertising campaigns. Earlier this year, Hindustan Unilever Limited (HUL), the country’s single largest advertiser, has decided to stop marketing and advertising its entire range of foods and beverages to children under the age of 16 from 2023 amid increased scrutiny on how foods and beverages companies market packaged products that are unhealthy to young consumers. Such a move by HUL has prompted many parents to discuss if manufacturers of packaged foods should not include children at all as part of their marketing or advertising campaign.

Post the discussions amongst consumers on the platform, LocalCircles conducted a survey to learn first hand from parents if currently the advertisements of packaged foods targeted at children were leading to increased consumption of unhealthy or junk foods by their children. Secondly the survey also asked consumers at large if the Government should come up with an enforceable national policy that prohibits manufacturers/brands of packaged foods from including children under the age 16 in their advertising campaign. The survey received over 24,000 responses from consumers located in 304 districts of India. 61% respondents were men while 39% respondents were women. 47% respondents were from tier 1, 31% from tier 2 and 22% respondents were from tier 3, 4 and rural districts.

56% parents surveyed say if their children did not come across packaged food advertisements targeting children, they would demand/consume less unhealthy packaged food 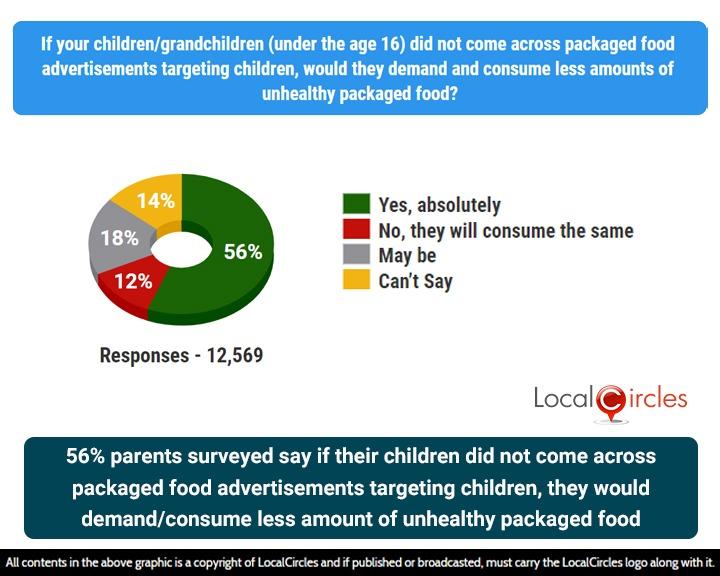 The Advertising Standards Council of India (ASCI) self-regulatory guidelines for food and beverages framed in 2013, is not very specific about wooing children (those below 12 years) using child models. It only addresses the issue of “misleading or deceptive” advertisement leading consumers to believe that consumption of product advertised will result directly in personal changes in intelligence, physical ability or exceptional recognition. Such advertisements are only permitted if supported and substantiated with evidence and with adequate scientific basis and meet the basic Food Standards laid down under the Food Safety Standards Act and Rules, wherever applicable. The guidelines also specify that the advertisements should not disparage good dietary practice or the selection of options, such as fresh fruits and vegetables that accepted dietary opinion recommends should form part of the normal diet or encourage excessive consumption.

The next question in the survey asked consumers, “Some global packaged food companies are starting to take an approach to not target children under the age of 16 via their advertising. Should the Government of India also make rules where packaged food companies in India are not permitted to target children under-16 via their advertisements?” In response, the majority, 81% of consumers said “Yes, this must be done” and another 11% said “Yes, this must be done but for children 12 and under”. Only 4% said “No, this must not be done as a rule and let packaged food companies do it voluntary”. 4% couldn’t say. On an aggregate basis, 92% of citizens surveyed are in favour of the Government bringing a rule that prohibits brands from targeting children via advertisements of packaged foods. This question in the survey received 12,408 responses. 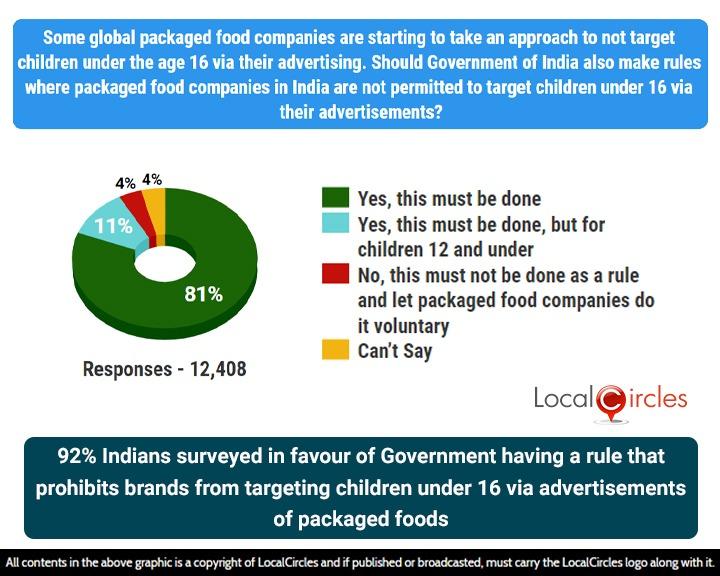 LocalCircles will share the findings of this report with the Department of Consumer Affairs, the Central Consumer Protection Authority, the FSSAI and the Ministry of Information and Broadcasting such that the relevant advertising and other rules can be amended to prohibit the depiction of children in advertising of packaged foods.