7th May 2020, New Delhi: After the Ministry of Home Affairs announced further relaxations in the world’s biggest COVID-19 lockdown, liquor shops across the country opened for the first time since March 24th, when the first phase of lockdown was announced. Most State Governments have been in desperate need of excise revenue generated from liquor and hence its sale has been permitted even in the red zones. However, various media reports have shown how social distancing norms were being blatantly violated in many parts of the country.

After hundreds of posts and comments were received from citizens highlighting concerns about opening up of liquor shops, crowd mismanagement, risk of COVID-19 spreading, LocalCircles conducted a survey to understand from citizens how should the sale of liquor work in red zones in their opinion. The survey received 8,078 responses from various parts of the country. In response, 52% citizens said the administrations should implement a solution for home delivery of liquor in red zones to prevent the spread of COVID-19 due to crowds at liquor vends. 16% said shop opening time should be extended while 23% said police must be deployed to ensure social distancing. 9% were unsure about it. 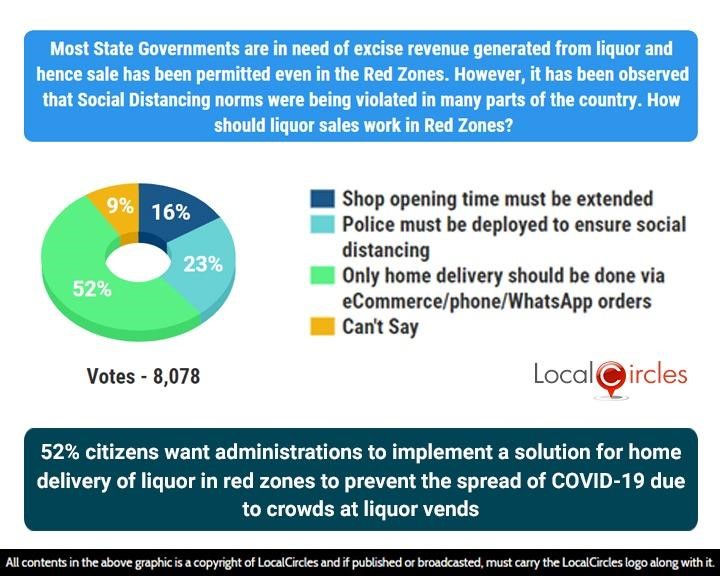 Last week, as the nationwide shutdown to check the spread of COVID-19 was extended by another two weeks, the MHA had said that except in containment areas, standalone liquor shops can now re-open across the country. The guidelines also said that these shops should not be located in markets and malls in urban areas and that a minimum six-feet social distancing should be ensured, with no more than 5 people allowed inside a shop at the same time.

In many places across India, queues as long as 1 km were seen in front of liquor shops with anxious tipplers gathered to buy their preferred brand. This has made residents living in these areas worried as people have been standing very close to each other, increasing the chances of the spread of COVID-19 virus.

In a late-night notification on Monday, the Delhi Government through the Delhi Excise (Amendment) Rules 2020, slapped a 70% ‘Special Corona Fee’ on top of the MRP on liquor and also said that the unruly crowd might lead to complete sealing of the area. In some places, the police also had to get some shops closed as the jostling crowd became unruly and forgot all social distancing norms. Despite the shops being shut, hundreds of people continued loitering in neighbouring streets hoping that shops would reopen soon. On Tuesday, despite the increased prices, the queues continued at the liquor shops.

Each State Government amends their annual excise policy every year. So far, while no state explicitly allows or bans home delivery of liquor, it does not mean that it is allowed in the state. The Chhattisgarh Government recently permitted online sale of liquor so that crowding at wine shops can be discouraged, with a customer allowed to buy up to 5 litres of liquor at a time and a delivery charge of Rs 120 applicable. Punjab is also seriously considering allowing home delivery of alcohol to prevent crowding. Before the lockdown, there were also many shops in Delhi and Gurgaon who would deliver alcohol in their area. Many apps in countries like USA and Canada are allowed to home deliver alcohol. The key concern in India though is lack of clarity around need for licenses by the delivery company as well as the age verification responsibility that may get imposed on the company and personnel delivering. However, some of these can be addressed if Aadhaar authentication is utilised such that the delivery person just has to validate the Aadhaar number before delivering.

Citizens strongly feel that delivering liquor at the consumer’s doorsteps, just like other products, is the only way to stop this high-risk gathering of people around liquor stores. This will ensure that the number of people who gather in front of the liquor vends goes away and at the same time, excise revenue keeps flowing for the Government.

LocalCircles will share these findings with Chief Secretaries of all states requesting them to give this public input, the due consideration.