19th February 2019, New Delhi: Since the first week of December 2018, the startup entrepreneurs via LocalCircles had been flagging the issue of angel tax which was then taken up by LocalCircles with leadership of DPIIT and the Commerce and Industry Minister.

As the startup entrepreneurs via polls and discussions proposed solutions, LocalCircles wrote a letter to the Hon’ble Prime Minister bringing the issue to his attention and requesting action. Within 24 hours of the letter, DPIIT released its first notification on Jan 16, 2019. Subsequent to that, LocalCircles basis feedback from startup entrepreneurs and a Govt-Industry interaction made another submission to DPIIT and CBDT along with releasing an angel tax survey in early February.

The LocalCircles angel tax survey conducted in association with IVCA (Indian Venture Capital Association) in which 10,000 responses were received from over 2500 startups, outlined that 73% of startups that raised angel capital received 1 or more angel tax notices with 28% among them receiving 3 or more notices. The survey also indicated that 70% of the notices that startups received, were under Section 56(2)viib, 6% only under Section 68 while 24% were under both Section 56(2)viib and Section 68. The survey, which was an eye opener for the startup ecosystem, DPIIT and the CBDT also outlined that 73% of the notices went to startups that raised between 50 lakhs and 2 crores.

Basis these, LocalCircles along with industry body iSpirt made a submission to CBDT on Feb 6th requesting that a blanket exemption be given to all startups that provide ITR, audited financials and a self-certified investment declaration outlining that they are not investing capital raised in real estate, premium cars, gold bullion, diamonds, precious metals or jewellery of any kind, listed or unlisted securities directly or indirectly via equity mutual funds, precious arts and coins, such that startups can easily be differentiated from money laundering shell companies.

It was also proposed by LocalCircles that once these documents are submitted by startups to DPIIT, it should notify CBDT with names and identification of all these startups such that they are also identified as startups in the CBDT systems. If that happens, any time a compliant startup has a share premium event and an automatic notice is being generated under section 56(2)viib, it should be auto nullified thereby exempting the startup from angel tax. CBDT was receptive to this solution for section 56(2)viib. Section 68 which checks for genuine source of funds was a separate issue, discussed but not solved for as CBDT must ensure that only tax paid income is being invested in startups.

LocalCircles is thrilled to see that all the above recommendations have been accepted by CBDT and DPIIT, and consideration of shares received by eligible startups up to an aggregate limit of Rs. 25 crores will be exempted from section 56(2)(viib). In addition, investments by Non-Residents, Alternate Investment Funds – Category 1 shall also be exempt under Section 56(2)(viib) of IT Act beyond the limit of Rs. 25 crores.

Investments into eligible startups by listed companies with a net worth of Rs. 100 crores or turnover of Rs. 250 crores shall also be exempt under section 56(2)(viib) of Income Tax Act beyond the limit of Rs. 25 crores. With this, there will be no case to case examination of Startups for exemption under section 56(2)(viib) of IT Act. Government has also accepted the LocalCircles’ demand of raising the duration of a startup from 7 years to 10 years. LocalCircles will work with DPIIT and CBDT on the effective and timely implementation of these new rules. 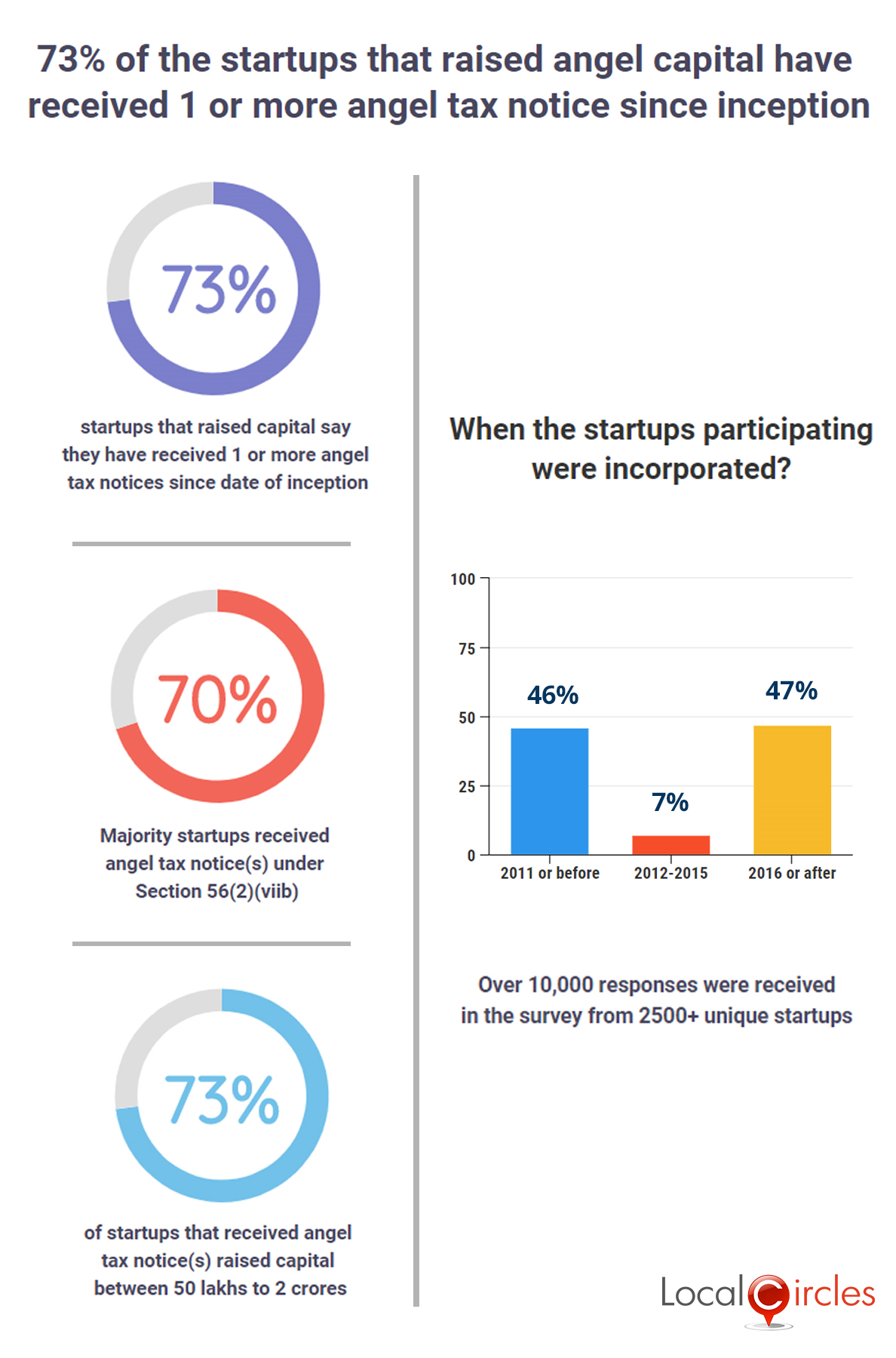